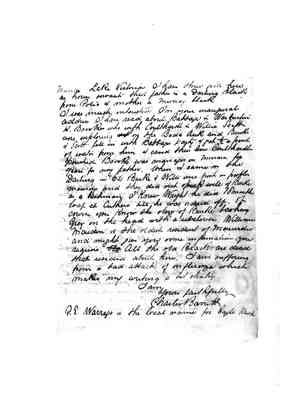 Mungo Lake Victoria. I have three girls hereas house servants their father is a Darling Black from Polia + mother a Murray Black . I was much interested in your inauguraladdress. I have read about Babbage and WarburtonH. Brookes [sic] who with Coulthardt [sic] and Willie Scottwere exploring on the Bede Creek and Brooks+ Scott fell in with Babbage's party + got a pint of water from him + saved their lives Coulthardtperished Brooks was manager on Moorara foryears for my father. When I came on the Darling in '64 Burke + Wills were fresh in peoplesmemory and they did not speak well of Burke as a bushman. I knew Wright he did 18 monthsloaf at Culhero till he was or ordered off. Ofcourse you the story of Burke touchingGrey on the head with a revelover [sic]. William Maiden is the oldest resident of Menindeeand might give you some information yourequire. All the old Blacks are dead that resided about here. I am suffering from a bad attack of influenza which makes my writing a bit shaky. I am Yours faithfully Charles Barrett P.S Warrego is the local name for Eagle Hawk

Show pages that mention Willie Scott in all works