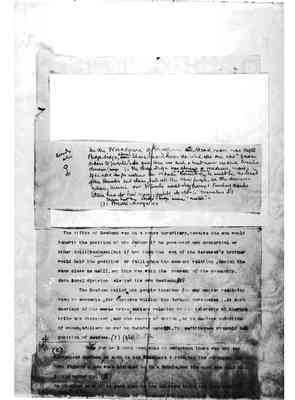 in the Wiradjuri of Riverina a Headman was calledBidja-bidja whereas I have heard him described as one who "gaveorders to people", and there was such a Headman in each (?)(?) . The Bidja-bidja was always a medicine man.If he were for instance the (?) Kumbo and a medicine man he would be the headof the Kumbo sub-class, but all the other people in the (?)Yilrai, Murri or Wumbi would (?) him. Similay eachtotem had its Headman, probably its (?) (?). (1)(?) had the Bidja-bidja (?) "(?)" -(1) (?) (?)

The office of Headman was in a sense hereditary, because the son wouldinherit the position of his father if he possessed any oratorical orother eminent ability; but if not then the son of the deceased's brotherwould hold the position or failing him the nearest relation, having thesame class name (I). But this was with the consent of the community.Each social division elected its own Headman.

The Headman called his people together for any matter requiringthem to assemble, for instance holding the Burbung ceremonies,. At suchmeetings of the tribe, matters relating to the interests of the wholetribe are discussed, and thecourse of action, as to murders, abductionof women, adultery or war is decided upon. The medicine man commonly hasposition of Headman. (I). (?)

So far as I have beenable to ascertain there was not anyrecognised Headman, as such, in the Wukelbura tribe, but the strongest andbest fighting men were listened to in a debate, and the aged men held (?)little authority. ( )

On the other hand it is said that in the Dalebura tribe the (?) 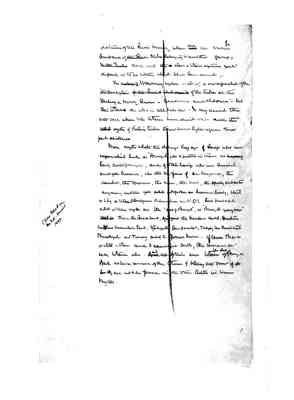 distance of the river Murray when were the northern boundaries of [crossed out - the River] tribes belonging to another group, [crossed out - To the eastern] and with the class & totem systems quite different in type within which I have been describing.

The [crossed out - system of] Woeworung system is clear, a modification of the two class system [crossed out - of the River & which occured] of the tribes at the Darling/Darling River & Murray/Murray River Rivers - "Wukwara and Kilpara" - but the totems are absent all but one. In my mind this is a case where the totems have died out and the [crossed out - tribal] myths of Kulin tribes throw some light upon their past existence.

These myths relate the [??] long ago of beings who were supernatural such as "Bunjil" who is featured in them as [crossed out - having] being another [??], and of other beings who were Animals and yet human, who took the forms of the Kangaroo, the wombat, the opossum, the Emu, the crow, the spiny anteater [crossed out - any] many and then [crossed out - yet] [??] moopoke as human being, that is big as [crossed out - these] aborigines themselves would (1). Some principal actors in these myths are the "Sons of Bunjil", or "[Bunjil's/Bunjil]] young men"[crossed out - that is] Thara the Quail Hawk, [Dju??yart?] the Nankeen Kestrel, [Dautun ?]the Blue [mormlain Dart?], [Yūkyuthy?] Green parakeet, Tadjery the [??] Phascologale and [Turuny?] [himself?] the opossum [??]. Of these Thara is [itell?] a totem and I cannot [find?] [??], the remainder were totems also and all of them were the class totems of Bunjil. But no traces remain of the totems of Waang the crow if [crossed out - it] [crossed out - be] they are not to be found in the other [Actors?] in there myths. 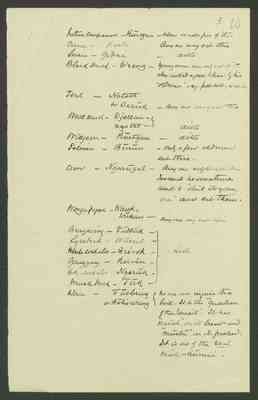 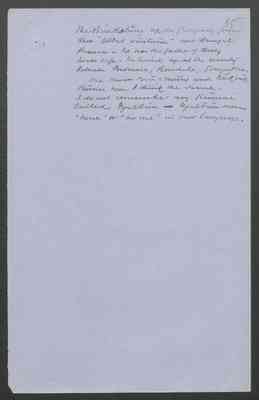 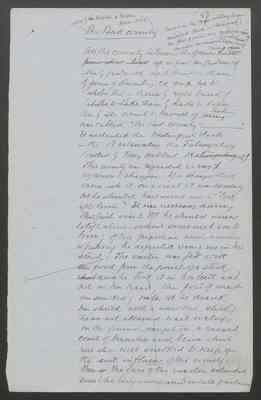 All the country between the Yarra River[from about Lilyd - crossed out] up as far as Gardner Ck - then by Gardner Ck up to Dandenong then by source of Dandenong Ck +c+c up to Latrobe River; thence by right bank of Latrobe to Lake then by Lake to Lakes Entrancethen by sea coast to mouth of Murraywas called “the bad country” ------------It included the Westernport blacks – the Bratawalung the Talungalang (called by Tommy Hoddenot Katungal)This country was regarded as very injurious to strangers. If a strange black came onto it on a visit it was necessary that he should have some one to “look after him”. It was necessary during this first visit that he should never be left alone without some one to see to him; if his guardian went hunting or fishing he deputed some one in his stead. The visitor was fed with [m - crossed out] food from the point of a stick [which - crossed out] and he took it in his teeth and not in his hands; this food of meat was smoked; water that he drank was stirred with a smoked stick; he was not allowed to sit or sleep on the ground except in a raised couch of branches and leaves which were also well smoked, to keep off the evil influence of the country. [This is - crossed out] The care of the visitor extended even to his being asleep and in calls of nature.

Last edit 2 months ago by ALourie
All 5 records

Show pages that mention Wuk-Wuk in all works