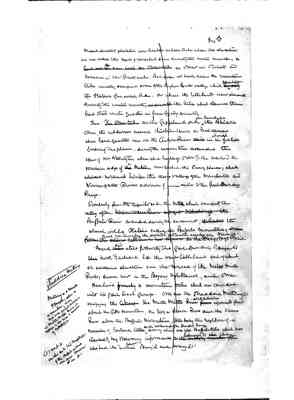 on such elevated plateaux were located certain tribes where the elevation was such within the region of perpetual sun during the winter months, as [crossed out - but such was the case with the Omeo tribe]: at Omeo in Victoria and Maneroo in New South Wales: But even in such cases the mountain tribes usually occupied some of the higher River valleys which [crossed out - lay any?] [prohibit?] the plateaux from either side, or where the tablelands were inaccessible during the winter months, [crossed out - in summer] the tribes which claimed them had their winter quarters in lower lying country.

Thus [crossed out - The Omeo tribe] on the Gippsland side one branch of the Baiaka clan, the subdivision named [Kŭtbŭru-taura?] or Fire carriers? whose headquarters were on the Avon River [crossed out - at the] in the [above - and [??]] foothills bordering the plains, during the summer time ascended the spur of Mt Wellington where at a height of 5000 ft then reached the southern edge of [crossed out - the] a plateau now called the Snowy Plains; which extended northward between the deep valley of the Macalister and Wonangatta Rivers a distance of _____ miles to the Great Dividing Range.

Similarly from the oppposite side the tribe which occupied the valley of the [crossed out - Upper Ovens River and its tributary the] Buffalo River ascended during the summer, [crossed out - the latter] then almost isolated Plateau called the Buffalo Mountain, [crossed out - and the] and was therefore the distant and hostile neighbour of the Braiaka. [crossed out beneath - former the ???? tableland now known as the Dargo High Plains.]

Beyond [crossed out - these] and still following the Great Dividing Range to [crossed out - the] north Eastward lies the vast tableland out of which at successive elevations rise the sources of the Mitta MittaRiver, known now as the Bogong High Plains, and Omeo.

Here lived formerly a mountain tribe which was divided into two great local groups. One was the Theddora Mittŭng (1) occupying the [Cobungra - crossed out] the Mitta Mitta River and its tributaries [from - crossed out] upwards from about the [Gibbo?] mountain, the Upper Kiewa River and the Ovens River above the Buffalo Mountain, thus being the neighbour of a number of lowland tribes in the northern half of the Dividing Range, among which was the Buffalo tribe which was claimed by my Woeworung informant as [the outlying member of the - crossed out] belonging to those who had the ‘names’ (classes) Bunjil and Wang (1)

Mittung = a number of people; also = a number, many. this word particularly appears in Mitta-Mitta River in reference to its rise & number of tributaries. 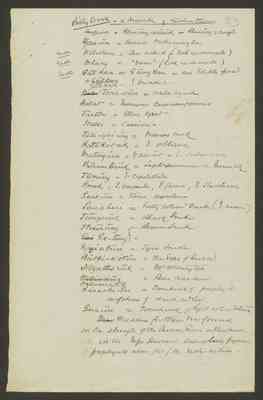 Last edit 24 days ago by ALourie 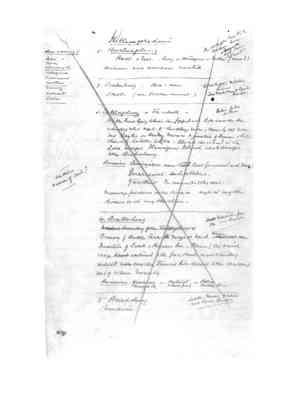 3. Tatūngolung = Ta= south Between Lakes+ SeaAll the land lying between the Gippsland lakes and the seaextending also west to Buckleys river, thence by that rivervia Bayles or Baileys morass to junction of Thomson + Latrobethence by Latrobe to Lakes. Also all the islands in the Lakes except Flannigans Island which belongs to the Brabrolung.Divisions - Binnajerra near Boul Boul (pronounced as in Fowl)Gnarrawut Lake VictoriaYūnthur The remainder to the westMarriage forbidden in the division maybe in among otherdivision or in any other class.

4. Bratowlung [South - crossed out] Fall to sea from the --- Range[Western boundary of the Tatūngolung - crossed out]Boundary by Buckley's River the to range at head therein nearjunction of Latrobe + Thomson Rivers. Thence by the saidrange [towards - crossed out] westward to the Great scrubs and extendingwestwards to [the - crossed out] near the Tarwin River thence to the sea coastwest of Wilsons Promontory.Divisions Yowung Kutwut DelinWarrigal ck Wilsons promontory Buckleys River

Last edit 6 days ago by ALourie
All 3 records

Show pages that mention Avon in all works