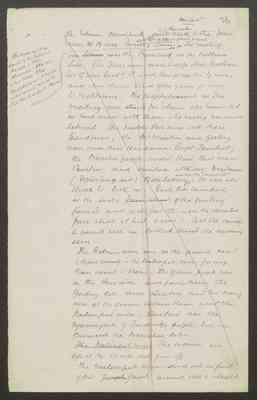 The Echuca men had sent word to the Yarra men that they were coming down so that [they - crossed out] all had plenty of time in the winter to meet. The meeting was [between - crossed out] near the Merri creek on the Melbourne side. The Yarra men used to stop about Melbourne till they were tired of it and then go up the Yarra, and when they were tired of the Yarra go back to Melbourne. The people present at the meeting were [the E - crossed out] from Echuca who however had no head man with them – he having remained behind; the Western Port men with their headman; the Mt Macedon and Geelong men under their Headman Capt. Turnbull, the Werribee people under their head man Benbow, and ourselves with our Headman(Ngŭrŭng-eit) Billibellary who was my “Mameik”. We were all there to look on. Each lot camped at the side [from which - crossed out] of the meeting ground and not far off - in the direction from what it had come. All the camps as usual with us looked towards the morning sun.

[written in left side margin]The message was sent by the Echuca people to the [??] blacks who told the Melbourne blacks who sent word to the Westernport blacks. 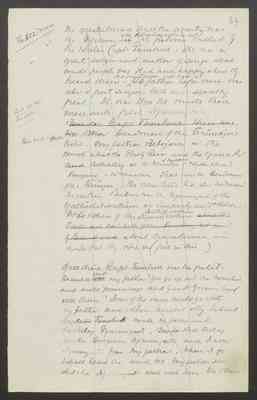 The Headmen The greatest man of all the country was the Ngurungeit of the Kūrnŭng willum tribe at Gisborne called bythe whites Capt. Turnbull. He was a great singer and maker of songs which made people very glad and happy when they heard them. His grandfather before him and His father before him was also a great singer. Both were equallygreat. It was this that made these men such great Ngurungeits.

[Besides Capt Turnbull there were- crossed out]There were three [two other - crossed out] Headmen of the Ūrŭndjeritribe. My father Bebejern in the country about the Plenty River and the Yarra Rv [and - crossed out] Billbillary at Mt Macedon & Melbourne (? the stone place)Bingerim – Mt Macedon. These were the Headmen of the Ūrŭnjeri. The other tribes had also headmen. For instance Benbow was the Ngurungeit of the Yallūkit- willŭm at Sandridge and St Kilda.Mr De Villiers of the Ngarū willum Būlūk willum [about the South and west side of the Dandenong Mt round by Berwick and - crossed out] about Cranbourne and Westernport Bay +c +c (fill in this)

Of all these Capt. Turnbull was the greatest. He could [tell - crossed out] say to my father “You go up into the mountains and make 'possum rugs and by and bye come back with them”. Some of the men would go with my father and others would stay behind. Captain Turnbull made my father and Billbillary Ngurungaets. [My fa- crossed out] Bill Billary made Bingarim ngurungeitā and I am Ngurunjeitā from my father. When I go I shall leave the word that my sister's son shall be Ngurungaet with with him two others

[written in left side margin] 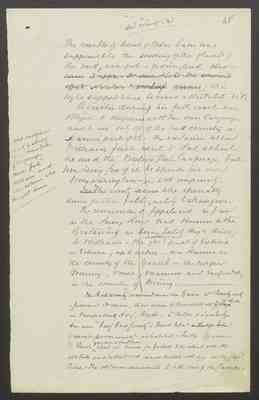 48Bad country (2) The results of breach of these laws was supposed to be the swelling of the glands of the neck, armpits & groin, and also [since it appears that ?? of late the ??- crossed out][effect similar to ?? - corssed out]; this maybe supposed to have become attributed to it.

A visitor during his first visit was obliged to dispense with his own language and to use only that of the bad country or of some part of it. For instance when William first went to Port Alberthe used the Western Port language but him being free of it he speaks his ownWoey wūrung Woeywuring language with impunity.

[In - crossed out] This country seems to be specially known for this fatal quality to strangers.

The remainder of Gippsland as far as the Snowy River was known to the Bratanūng as being fatal through Būlk;to William – the Northern and N - S part of Victoria- Echuca, up to Albury – was known as the country of the Yarūk – the upper Murray, Omeo, Maneroo and Twofold Bay,as the country of Mūng. The Bad country commenced near the Yarra at Brushy creek– followed it down, then across to Mordialluk Ck [through - crossed out] at [?Berwick?] - Mordialluk itself, Brighton - St Kilda & Sandridge+c was “half bad country”. French Island [& Phillip Island - crossed out]was not permanently inhabited. In the Egg season the [?Baiks?] young men & married men went in canoes from Yalluk to the island with the ebb tide and returned with canoes loaded with eggs at the flood tide. The old men remained to take care of the Camp. 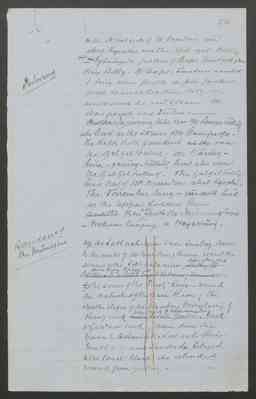 54JajowrongOn the N west side of Mt Macedon and about Kyneton were the Gal-gal-Ballŭk – Their [the - crossed out] Ngŭnŭngeit partner of Capt. Turnbull, wasKing Bobby. If Capt Turnbull wanted to bring some people up from further north he would tell King Bobby who would send the word to them. All these people were Kūlin.

Another Jajowrong tribe was the Learga bŭllŭk who lived on the sources of the Campaspe.The Kalk Kalk goondeich [at the - crossed out] near the Gal Gal Bulluk; the Wŭrŭng-hŭra-gerŭng-bŭlluk lived also near the Gal gal bulluk. The Gal Gal būllŭk lived west of Mt Macedon about Kyneton. The Tonembur-laug-gūndeith lived in the upper Loddon River[and the - crossed out] These all spoke the Jajowrong language – Williams language is Weyworŭng.

Last edit 4 months ago by ALourie
All 4 records

Show pages that mention Sandridge in all works