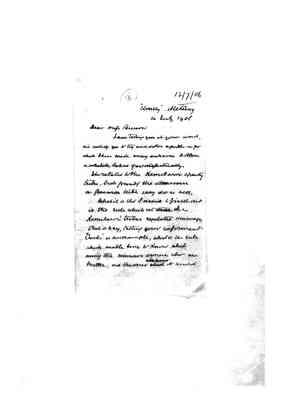 I am taking you at your wordand asking you to try and solve a problem for which I have made many endeavors to obtaina solution, but so far ineffectually.It relates to the Kamilaroi speakingtribes, but possibly the Murawarior Gooamoo tribe may do as well. 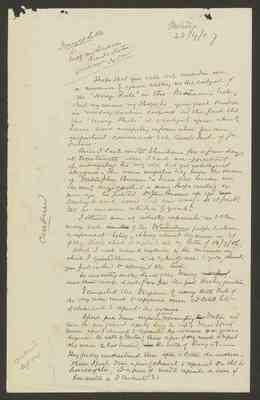 I hope that you will not consider mea nuisance by again writing on the subject ofthe "Marriage Rule" in the Mūrawari tribeBut my excuse may I hope be your great kindnessin making earlier enquiries and the fact thatthe "Marriage Rule" is a subject upon whichI am now compiling information for animportant communication to the Anthr. Inst. of GtBritain.Since I last wrote I have been for a few daysat Wentworth where I had an opportunityof interrogating two very old but yet intelligentaborigines. The man singular to [??] bears the nameof "Doctor John Benson" - I am told because in the early days of settlement - some half a century ormore ago, he [??] Dr John Benson up theDarling to seek some new new country. Is it possiblethat he was some relative of yours?I obtained some very interesting information as to theirmarriage rules [in the- crossed out] of the Wembaio people to whommy informants belong, it being almost the same as thatof the Dieri which I explained in my letter of 12/7/06.What I wish now to explain is the manner inwhich I questioned them on it may be of use to you, shouldyou feel induced to attempt the task.We were sitting on the bank of the Murray [not far f - crossed out]near their camp + not far from the [Junc- crossed out] Darling junction.I compiled the Diagram by using little bits ofthe dry river mud to represent men and little bitsof charcoal to represent the women.I first put down the piece of mud representing [the -crossed out] Doctor andthen the piece of charcoal representing Lucy the wife. Then I putdown a piece of charcoal to represent the woman 4 on your diagram, the sister of Doctor; then a piece of mud to representthe man 2 her husband, [who -crossed out] the brother of Lucy - 3 -They fully understand this after a little discussion.Then I put down a piece of charcoal to represent 5 - that is her daughter, and a piece of mud to represent a son ofher sister 4 and the husband 2. 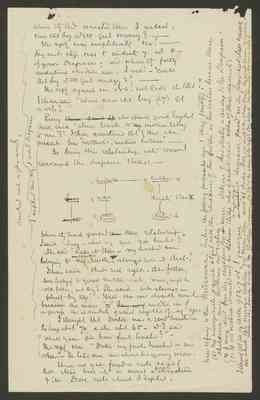 When they had mastered this I askedcan that boy and that girl marry?The reply was emphatically no!My next step was to indicate 7 and 8of your Diagram; and when they fullyunderstood who these were I asked "couldthat boy and that girl marry?"The reply again was "No! not like it that".I then said "Where can that boy (No 7) geta wife?"Lucy [then said - crossed out] who speaks good Englishthen said "Where Uncle to [my - crossed out] mother belongto me" ? "I then ascertained that by this shemeant her "mother's, mother's brother"To bring this relationship into view Irearranged the diagram thus:[diagram] 1 Grandmother brother 4[Lucy - crossed out] 2 mother daughter 5 - son x[daughter - crossed out] 3 daughter (Lucy) son (Doctor) 6

When they had grasped [this - crossed out] these relationshipsI said "Lucy - which way you got husband?"She said "Like it this - my husband onebelonging to my mother's uncle, always like it that."I then said "that not right - that feller, son belonging to your mother uncle, man, might beold feller, not boy." She said not always -plenty boy too!" This was no doubt correctbecause the man "x" [being one - crossed out] would be one of a group the individuals of which might be of any age.I thought that Doctor was a second husband -he being about 70 + she about 65 - and I said"When you get him first husband?"The reply was "Doctor my first husband - noother." He take [??] me when he young man.I have not yet found a rule exactly like this but it is merely a [??] variationof the Dieri rule which I [?explained?]

[written in right side margin]Now referring to the Mūrawari tribe the following proposition and [?they?] [?justified?](1) The marriage rule cannot start with the children of [?two?] brother or [?two?] sisters because thenchildren are brothers and sisters.(2) I may start from the children of a man and then of his sister - [?adding?] to the Diagram(3) If not so then it could only be between those who cannot have either of these descents.I think that in my letter of 12.7.06 I gave you [a lecture - crossed out] a hypothetical diagram found in the four sub class namesin which the marriage between "7 m muru-Tom and "8 f Bullia - Polly - is [??] to the class law. The question then remainswhat is the small group of the "Bootha" women (a 1/4th of the women of the tribe) from which 7 m mur-Tom may have a wife?

Show pages that mention Mūrawari in all works