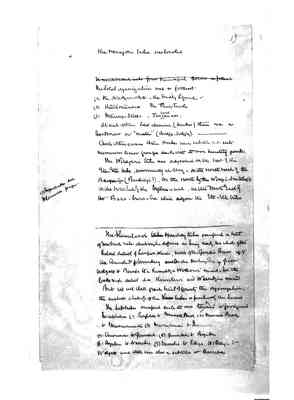 + the Warajeri tribe was located

[crossed out - It was divided into four principal Hordes as follows] The local organization was as follows: (1) the [Naraudra?] - the prickly lizard (2) Kūtamŭndra - the river turtle(3) mŭing-būlla - Two bark canoes.

At each of these local divsions (Hordes) there was a Headman or "master" (Bidja-Bidja). -

As in other cases these Hordes were subdivided into numerous lesser groups each each with its own hunting grounds.

The Kamilaroi [crossed out - tribe] speaking tribes occupied a tract of New South Wales which may be defined as being nearly the whole of the Pastoral district of Liverpool Plains, north of the Gwydir River up to the Queensland boundary. [crossed out - and] On the Darling River, from Walgett to Bourke it is [Kamalaroi/Kamilaroi] & Wolleroi mixed. In the Castlereagh district it is Kamilaroi and [Warradjeri?] mixed.

But in all this great tract of country the organization, the customs & beliefs of the tribes is practically the same.

The subtribes occupied each its own taurai or food ground for instance (1) Singleton to Muswell Brook (2) Muswell Brook to Murrurundi (3) Murrurundi to [Queriundi?] [Quirindi](4) [Querindi] to Gunnedah (5) Gunnedah to Bogabri (6) Bogabri to Narrabri (7) Narrabri to Pilliga (5) Pilliga to Walgett and there was also a subtribe at [Barraba]]. 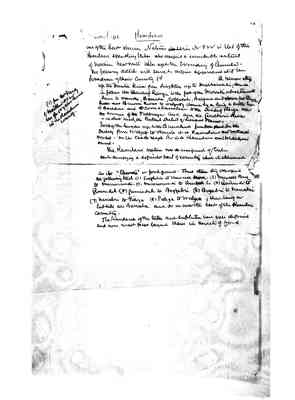 One of the best known Nations [crossed out - was] [term?] [is?] [for?] is that of this Kamilaroi speaking tribes who occupied a considerable extent of northern New South Wales/NSW up to the boundary of Queensland. The following details will serve to define approximately the boundaries of their country (1)

[Left margin note}(1) from Mr [Warby?] of Maitland New South Wales/NSW and who for 50 years lived in the Kamilaroi country.

Up the Hunter River from Singleton up to Murrurundi; thence it follows the Dividing Range to the foot of the mountain above Tamworth thence to Manilla, Barraba, Cobbedah, Bingera/Bingara and down the Gwydir/Gwydir River,[crossed out - Rivers and] Barwon Rivers to Walgett; thence by a line a little [below?] of Baradine and Coonabarrabran to the Dividing Range near the sources of the [Talbrager?] Creek and the Goulburn River - in short nearby the Pastoral District of Liverpool Plains.

as its "taurai" or food ground. Thus [crossed out - these] they occupied the following tracts (1) Singleton to Muswell [brush?]. (2) Muswell [Brush?] to Murrurundi, (3) Murrurundi to Quirindi, (4) Quirindi to Gunnedah, (5) Gunnedah to Bogabri, (6) Bogabri to Narrabri, (7) Narrabri to Pilliga, (8) Pilliga to Walgett; there being one subtribe at Barraba and or in over the rest of the Kamilaroi country.

The boundaries of the tribes and subtribes were well defined and none must pass beyond them in search of food. 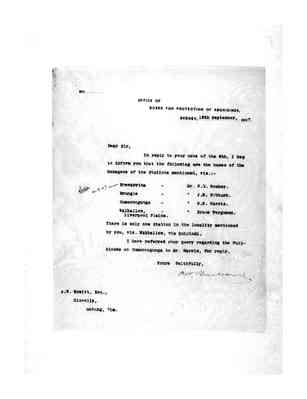 Dear Sir,In reply to your note of the 6th, I begto inform you that the following are the names of theManagers of the stations mentioned, vis:-Brewarrina - Mr H. H. HockeyBrungle - [ditto] J. M. HubbardCumeroogunga - [ditto] G. H. HarrisWalhallow, Liverpool Plains [ditto] Bruce Ferguson

There is only one station in the locality mentioned by you, viz. Walhallow, via QuirindiI have referred your query regarding the Full-bloods on Cumeroogunga to Mr Harris, for reply.Yours faithfully,R H Beardsmore

Last edit 3 months ago by ALourie
All 3 records

Show pages that mention Liverpool Plains in all works