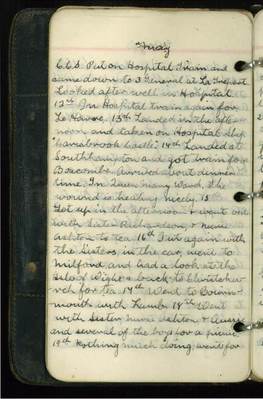 C.C.S. Put on Hospital Train and came down to 3 General at La Treport. Looked after well in Hospital. 12th On Hospital train again for Le Havre. 13th Landed in the after noon and taken on Hospital Ship "Carisbrook Castle". 14th Landed at Southampton and got train for Boscombe. Arrived about dinner time. In Queen Mary Ward. The wound is healing nicely. 15th Got up in the afternoon & went out with Sister Richardson, & Nurse Ashton to tea. 16th Out again with the Sisters, in the car, went to Milford and had a look at the Isle of Wight & back to Christchu- -rch for tea. 17th Went to Bourn- -mouth with Lamb. 18th Went with Sister, Nurse Ashton & Aussie and several of the boys for a picnic. 19th Nothing much doing, went for

Last edit about 7 years ago by twofruits 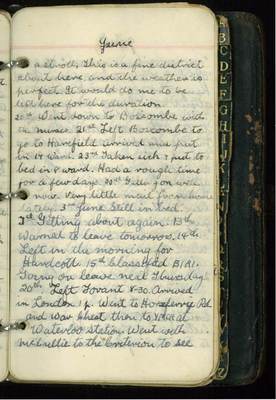 a stroll. This is a fine district about here, and the weather is perfect. It would do me to be left here for the duration. 20th Went down to Boscombe with the nurses. 21st Left Boscombe to go to Harefield arrived and put in 14 Ward. 23rd Taken sick & put to bed in 8 Ward. Had a rough time for a few days. 30th Getting on well now. Very little mail from home lately. 3rd June. Still in bed. 7th Getting about again. 13th Warned to leave tomorrow. 14th Left in the morning for [Hardcott?]. 15th Classified B1A1. Going on leave next Thursday 20th Left Fovant 8-30. Arrived in London 1p. Went to [Horseberrie?] Rd and War Chest then to YMCA at Waterloo Station. Went with McCullie to the Criterion to see

Last edit about 7 years ago by twofruits
All 2 records

Show pages that mention Boscombe in all works