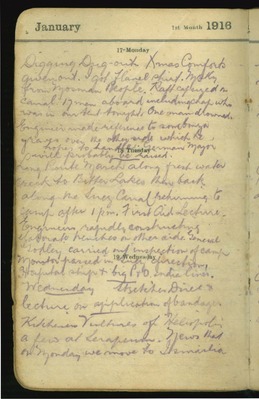 Digging Dug-out. Xmas Comforts given out. I got flanel shirt. Mostly from Mosman people. Raft capsized in canal. 17 men aboard including chap who was in our tent tonight. One man drowned. Engineer made reference to some bonza graves over the other side which he hopes to handle. German Major will probably be [?]

Stretcher drill & lecture on application of bandages. Kitchener's Vultures of Heliopolis a few at Serapeum. News that on Monday we move to Ismailia

Last edit about 3 years ago by Lenore 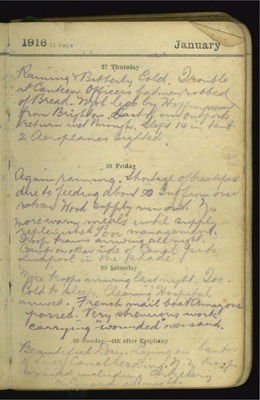 Again raining. Shortage of breakfast due to feeding about 50 Inf from our ration Wood supply run out. No more warm meals until supply replenished Poor management. Troop trains arriving all night. Camp on other side of Canal puts Liverpool in the shade

Last edit about 3 years ago by Lenore 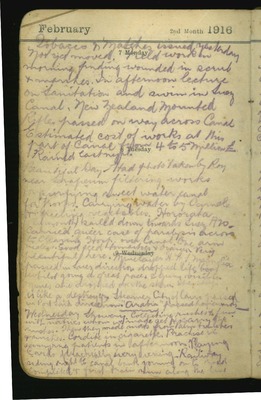 Tobacco & Matches issued yesterday Not yet moved. Field work in morning finding wounded in scrub & marshes. In afternoon lecture on Sanitation and swim in Suez Canal. New Zealand Mounted Rifles passed on way across Canal Estimated cost of works at this part of Canal & down 4 to 5 million £ Rained last night.

Showering. Collecting rushes to [?] with natives whom we made get & carry the rushes. Then they made mats from palm branches & rushes. Cordite in cigarette. Practice in carrying patients in afternoon. Playing cards practically every evening. Railway siding right to Canal bank going on to road completed & first train run along the line.

Last edit about 3 years ago by Lenore
All 3 records

Show pages that mention Suez Canal in all works