ReadAboutContentsHelp
The diary of Edwin Marshall Clarke (1917) follows the day-to-day happenings of a twelve year old boy's life in New York during the penultimate year of World War I. Edwin narrates his somewhat troubled adolescence through the lenses of his social life, home life, and formal education, and provides political commentary in the midst of the war. 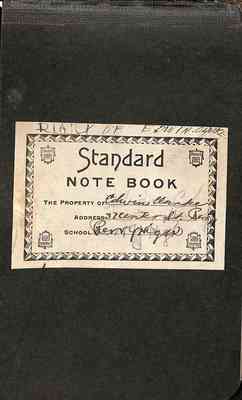 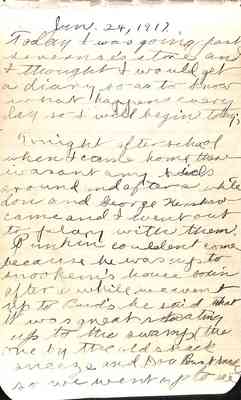 Today I was going past severnse's store and I thought I would get a diary so as to know what happens every day so I will begin today;

Tonight after school when I came home there wasant any kids[?] around and after a while don and George Kershaw came and I went out to play with them. Punkin couldent come because he was up to snookem's house boxin after a while we went up to Bud's he said that it was great skating[?] up to the swamp the one by the old shack sneeze and Doo Bart [word illegible] so we went up to see

and it had all melted so we came home and Dony found a little thing which you put on a chair and when you sit down on it it gives a squeck. Papa nearly fell out of his chair and aunt hattie sat down on it and never heard it.

Thurs. Jan 25, 1917 Awful windy, its pretty near time for my Popular mechanics magazine to come. I read two books yesterday, the Call of the Wild by Jack London and Boy Scouts canoe trip. Miss Fox the school teacher stayed with my sister Louise all night last night I dident read anything tonight hardly. Nothing Particular except that Lena Royce came up and sang some songs to us while she was waiting for my sister to go to dancing school with her. The songs were awful preaty. I passed with honor from the 7a Grade to the 8B Grade My standing in regents in Arithmetic was 97 In spelling 85 I expected to get about 60. I have got a diary about Harry A Shute. I tell you he must have had some pretty wild times. He couldent spell worth a cent. If I couldent spell better I would chase my ankle. I dont have to work as hard as he did because we have a colored (brown) girl working for us She isn't going to stay long We kids dont have half as much fun as Harry

shute did. He was awful funny All the doorbells around here are so that you have to go up and press a button or turn a knob. so as you cant tie a string to 'em and pull them. Four or five years ago the drifts up to the field were 2 or 3 times as high as they ever are know. My mother sometimes is preaty meen because I have to hook my bathing suit to go in swimming and I am scared stiff because I am afraid that my brother would see me and tell mama that I was in swimming Sometimes I have it pretty tough like when I got a new pair of stock ings. Hambone, Punkin and me went up to the outlet[?] to get some willow lances and I had my new stockings on. I stepped on a stick sticking about half way up to my knee and I stepped on it and tore about 1 square foot out of my stockings I did that before thanksgiving and they dont know it yet you bet. If it had been somebody else it wouldent have happened

Fri. Jan 26, 1917 Cold and windy. I went to the show tonight part of it was awful funny. There a rich New Yorker who wanted to buy some land from a dutchman in Pennsylvania, but the Dutchman wouldent

sell and the N. Yorker hollered right out I will get the law after your you pinheaded Dutchman and this [] puffed on his pipe again and he stood up an looked as if he was going to hit the N. Yorker right in the middle of the stomach and the Dutchman said you look over that I don't hit you []— head under middle of the stommic. and he siced the dog on the N. Yorker and the dog chased the N. Yorker a long way. I wish every dutchman would do that to some of those stuck up New Yorkers. Jim Wade makes me laugh. When he was up here mending carpet he was talking about his fine all wool sweater that his brother made him. He was bragging of what fine underware which his nephew had sent him but he said this in earnest. Why I can't ware them you know, why if I wore them I would have to take all my clothes off at night and pull them on in the morning. I nearly split laughing but he didn't hear me you bet. I won't aregue any more because I want to read Sat. Jan, 27, 1917 Brightland [?] [?] in the morning but cold and windy at night. I went [?] to [?]

Help us transcribe historic documents from our Special Collections and Archives