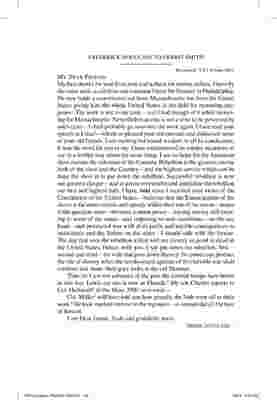 Rochester[, N.Y.] 19 June 1863. MY DEAR FRIEND: My best thanks for your kind note and a check for twenty dollars. I have by the same mail, a call from our common friend Mr Stearns1 to Philadelphia. He now holds a commission not from Massachusetts but from the United States giving him the whole United States as his field for recruiting purposes.2 The work is not to my taste—and I had enough of it while recruiting for Massachusetts: Nevertheless as this is not a time to be governed by one’s taste—I shall probably go soon into the work again. I have read your speech at Utica3—which so pleased your old enemies and distressed some of your old friends. I see nothing but sound wisdom in all its conclusions. It was the word for you to say. I have endeavoured on sundry occasions to say in a feebler way about the same thing. I see no hope for the American slave outside the salvation of the Country. Rebellion is the greatest enemy both of the slave and the Country—and the highest service which can be done the slave is to put down the rebellion. Successful rebellion is now our greatest danger—and to arrest overwhelm and annihilate the rebellion our first and highest duty. I have, held since I received your views of the Constitution of the United States—believed that the Emancipation of the slaves is far more certain and speedy within than out of the union—hence if the question were—between a union peace—leaving slavery still existing in some of the states—and imposing no new conditions—on the one hand—and protracted war with al its perils and terrible consequences to individuals and the Nation on the other—I should side with the former. The day that sees the rebellion killed will see slavery as good as dead in the United States. Hence, with you, I say put down the rebellion, first— second and third—for with that goes down Slavery. No power can protract the life of slavery when the ten thousand agonies of this terrible war shall confront and shake their gory locks at the old Monster.

Thus far I am not ashamed of the part the colored troops have borne in this war. Lewis my son is now in Florada.4 My son Charles reports to Col. Hallowell5 of the Mass. 55th6 next week—

Col. Miller7 will have told you how grandly the 54th went off to their work.8 He took marked interest in the regiment—as indeed did all the best of Boston.

I am Dear friend, Truly and gratefully yours 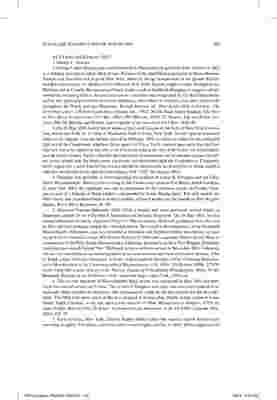 2. George Luther Stearns was commissioned by Massachusetts governor John Andrew in 1863 as a military recruiter to enlist black troops. Because of the small black population in Massachusetts, Stearns was then directed to go to New York, where he set up headquarters in the greater Buffalo and Rochester region. In addition to his efforts in New York, Stearns sought recruits throughout the Midwest and in Canada. He encouraged black leaders such as Frederick Douglass to support and advertise his recruiting efforts. Stearns’s success as a recruiter was recognized by the War Department, and he was granted permission to recruit nationally, after which he traveled even more extensively throughout the North and into Tennessee. Russell Duncan, ed., Blue-Eyed Child of Fortune: The Civil War Letters of Robert Gould Shaw (Athens, Ga., 1992), 26–34; Noah Andre Trudeau, Like Men of War: Black Troops in the Civil War, 1862–1865 (Boston, 1998), 72; Stearns, Life and Public Services, 286–95; Heidler and Heidler, Encyclopedia of the American Civil War, 1854–55.

3. On 26 May 1863, Gerrit Smith spoke at the Loyal League of the State of New York Convention, which was held 26-27 May at Mechanics Hall in Utica, New York. Smith’s speech reiterated many of his remarks from his Albany speech in February 1863, in which he called for the continued fight to end the Confederate rebellion. In his speech in Utica, Smith asserted once again that the Confederacy had to be toppled at any cost, even if it meant risking the fate of the Union, the Constitution, and the entire country. Smith called for the cultivation of earnestness and resentment against the rebels, which would help the North more vigorously and effectively fight the Confederacy. Ultimately, Smith urged that a man’s love for his country should be measured by his hatred for the rebels, and that only that would effectively end the Confederacy. DM, 5:855–56 (August 1863).

4. Douglass was probably in error regarding the position of Lewis H. Douglass and the Fiftyfourth Massachusetts. Shortly after arriving at the Union army camp at Port Royal, South Carolina, in early June 1863, the regiment was sent to participate in the infamous attack on Darien, Georgia, as part of a brigade of black soldiers commanded by James Montgomery. The next month, the Fifty-fourth was transferred back to South Carolina, where it would join the assault on Fort Wagner. Emilio, Brave Black Regiment, 36–50.

5. Norwood Penrose Hallowell (1839–1914), a banker and wool merchant, served briefly as lieutenant colonel of the Fifty-fourth Massachusetts Infantry Regiment. On 30 May 1863, he was named colonel of the newly organized Fifty-fifth Massachusetts. Hallowell graduated from Harvard in 1861 and then promptly joined the volunteer forces. He served as first lieutenant of the Twentieth Massachusetts Volunteers, and was wounded at Glendale and Antietam before transferring to command African American troops. His brother, Edward N. Hallowell, succeeded Robert Gould Shaw as commander of the Fifty-fourth Massachusetts following the latter’s death at Fort Wagner. Disability from previous wounds forced “Pen” Hallowell to leave military service in November 1863. Following the war, he entered into a successful partnership as a commission merchant in the wool business. John C. Rand, comp., One of a Thousand: A Series of Biographical Sketches of One Thousand Representative Men Resident in the Commonwealth of Massachusetts, A.D, 1888–’89 (Boston, 1890), 277–78; Josiah Granville Leach, History of the Penrose Family of Philadelphia (Philadelphia, 1903), 79–80; Benjamin Brawley, A Social History of the American Negro (New York, 1921), vii.

6. This second regiment of Massachusetts black troops was organized in May 1863 and mustered into federal service on 22 June. The efforts of Douglass and other war recruiters resulted in an especially large number of volunteers, who consequently made up the first recruits for the new regiment. The Fifty-fifth spent much of the war assigned to fatigue duty, finally seeing action at James Island, South Carolina, in the late spring and summer of 1864. Massachusetts Soldiers, 4:715–16; James Fuller, Men of Color, To Arms!: Vermont African-Americans in the Civil War (Lincoln, Neb., 2001), 174–75.

Last edit 20 days ago by Gazella 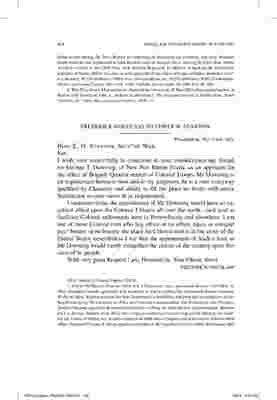 father-in-law during the Jerry Rescue by disposing of incriminating evidence, and later defended Smith when he was implicated in John Brown’s raid on Harpers Ferry. During the Civil War, Miller served as colonel of the 129th New York Infantry Regiment. In addition to backing the abolitionist activities of Smith, Miller was also an avid supporter of his wife’s suffrage activities. Hamilton Literary Monthly, 30:219 (February 1896); Free Thought Magazine, 14:202 (February 1896); Cookinham, History of Oneida County, New York, 1:361; Harlow, Gerrit Smith, 43, 408, 415–16, 483.

8. The Fifty-fourth Massachusetts departed for service on 28 May 1863 after a grand review in Boston with Governor John A. Andrew in attendance. The regiment arrived at Hilton Head, South Carolina, on 3 June. Massachusetts Soldiers, 4:656–57.

Philadelphia[, Pa.] 13 July 1863. Hon: E. M. STANTON. SECTY OF WAR. SIR: I wish, very respectfully to commend to your consideration my friend, mr George T. Downing, of New Port Rhode Island, as an applicant for the office of Brigade Quarter master of Colored Troops. Mr Downing is an experienced business man and in my judgment, he is a man everyway qualified by Character and ability to fill the place he Seeks with entire Satisfaction to your views of its requirement.

I moreover think the appointment of Mr Downing would have an excellent effect upon the Colored Citizens all over the north—and tend to facilitate Colored enlistments here in Pennsylvania and elsewhere. I am one of those Colored men who Say office or no office, equal or unequal pay,2 bounty or no bounty. the place for Colored men is in the army of the United States: nevertheless I see that the appointment of Such a man as Mr Downing would vastly strengthen the claims of the country upon this class of its people.

1. Edwin McMasters Stanton (1814–69), a Democrat, was a prominent lawyer from Ohio. In 1862, President Lincoln appointed him secretary of war to replace the discredited Simon Cameron. While in office, Stanton restored the War Department’s credibility and switched his allegiance to the Republican party. He remained in office after Lincoln’s assassination, but differences with President Andrew Johnson regarding Reconstruction led to a falling out with the new administration. Johnson tried to dismiss Stanton from office, but Congress reinstated him and impeached Johnson for violating the Tenure of Office Act. Stanton resigned in 1868 when Congress failed to remove Johnson from office. President Ulysses S. Grant appointed Stanton to the Supreme Court in 1869, but Stanton died

Last edit 20 days ago by Gazella
Displaying all 3 pages