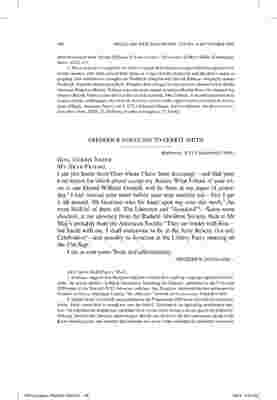 2. Many slaves who escaped to the North changed their names as an act of defiance against their former masters, who often named their slaves as a sign of their ownership and the slave’s status as property. Two well-known examples are Frederick Douglass and Harriet Tubman. Originally named Frederick Augustus Washington Baily, Douglass first changed his last name to Johnson before finally choosing Douglass. Harriet Tubman was originally named Araminta Harriet Ross, but changed her name to Harriet Tubman after she married her first husband, John Tubman. A second reason for such a name change, as Douglass related in his Narrative, was to make apprehension and return to slavery more difficult. Douglass Papers, ser.2, 1:77; Catherine Clinton, Harriet Tubman: The Road to Freedom (New York, 2004), 33; McFeely, Frederick Douglass, 77, 80-81.

Rochester[, N.Y.] 6 Sept{[ember] 1856[.] HON. GERRIT SMITH. MY DEAR FRIEND, I am just home from Ohio where I have been lecturing1—and find your kind letters for which please accept my thanks. What I think of your letter to our Friend William Gordell, will be Seen in my paper of yesterday.2 I had noticed your letter before your note reached me—Yes! I get it all around. Mr Garrison tries his hand upon my case this week,3 the most Skillful of them all. The Liberator and “Standard"4—Seem more shocked, at my apostacy from the Radical Abolition Society, than at Mr May’s apota[s]y from the American Society.5 They are tender with him— but harsh with me. I shall endeavour to be at the Jerry Rescue (1st oct) Celebration6—and possibly in Syracuse at the Liberty Party meeting on the 17th Sept.7

I am as ever yours Truly and affectionately FREDERICK DOUGLASS—

1. Evidence suggests that Douglass had just returned from making campaign speeches for Frémont. An article entitled “A Black Disunionist Stumping for Fremont” published in the 8 October 1856 issue of the Newark (N.Y.) Advocate indicates that Douglass delivered election addresses for Frémont in Otisco, Onondaga County, “the other day.” Newark (N.Y.) Advocate, 8 October 1856.

2. Smith’s letter to Goodell was published in the 5 September 1856 issue of Frederick Douglass’ Paper. Smith stated that he would not vote for John C. Frémont in the upcoming presidential election, but defended the Republican candidate from claims made during a recent speech by Edward C. Delavan. Specifically, Delavan acknowledged that he was drawn to the pro-temperance plank of the Know-Nothing party and asserted that Frémont was not a viable candidate for president because he 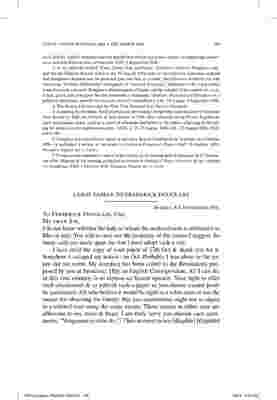 was Catholic. Smith’s response asserted that the Republican party had a history of supporting temperance, and that Frémont was a Protestant. FDP, 5 September 1856.

3. In an editorial entitled “Gone, Gone, Sold and Gone," Garrison criticized Douglass’s support for the Frémont-Dayton ticket in the 29 August 1856 issue of the Liberator. Garrison asserted that Douglass’s decision was for personal gain and that, as a result, the Liberator would be the sole remaining “Radical Abolitionist” newspaper. In “Another Somerset,” published in the 5 September issue, Garrison criticized Douglass’s abandonment of Smith and the transfer of his support to a candidate, party, and principles he had previously condemned. Garrison characterized Douglass as a political chameleon, morally inconsistent and self-contradictory. Lib., 29 August, 5 September 1856.

4. The Boston Liberator and the New York National Anti-Slavery Standard.

5. A leading Garrisonian, the Unitarian minister Samuel Joseph May had relocated to Syracuse from Boston in 1845. In a Fourth of July oration in 1856, May endorsed voting for the Republican party presidential ticket, causing a round of editorials and letters to the editor criticizing or defending his position in the Garrisonian press. NASS, 2, 16, 23 August 1856; Lib., 22 August 1856; DAB, 6:447-48.

6. Douglass was scheduled to speak at the Jerry Rescue Celebration in Syracuse on 1 October 1856; he published a review of the event in Frederick Douglass’s Paper. FDP, 10 October 1856; Douglass Papers, ser. 1, 3:xxvi.

7. Douglass was scheduled to speak at the Liberty party meeting held in Syracuse on 17 September 1856. Minutes of the meeting published in Frederick Douglass’ Paper, however, do not confirm his attendance. FDP, 3 October 1856; Douglass Papers, ser. 1, 3:xxv.

Brooklyn, N.Y. 6 Dec[ember] 1856. TO FREDERICK DOUGLASS, ESQ. MY DEAR SIR, I do not know whether the lady to whom the enclosed note is addressed as Mrs or lady. You will at once see the propriety of the course I suggest. So many calls are made upon me that I must adopt such a rule.

I have rec’d the copy of your paper of 17th Oct & thank you for it. Somehow it escaped my notice—in Oct. Probably I was about or the paper did not come. My attention has been called to the Resolutions proposed by you at Syracuse.1 [B]y an English Correspondent. All I can do, in this free country, is to express an honest opinion. Your right to offer such circulations & to publish such a paper as you choose cannot justly be questioned. All who believe it would be right in a white man to use the means for obtaining his liberty: that you recommend ought not to object to a colored man using the same means. Those means in either case are abhorrent to my mind & heart. I am truly sorry you cherish such sentiments. “Vengeance is mine &c.”2 Then at sweet peace [illegible] [illegible]