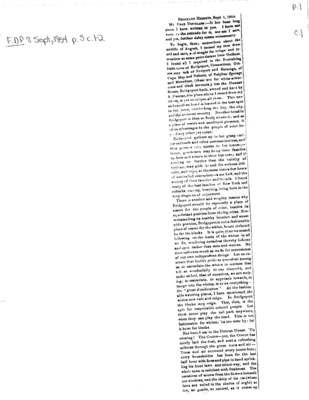 FROM OUR BROOKLYN CORRESPONDENT.

MY DEAR DOUGLASS:—It has been long since I have written to you. I have not been in the attitude for it, nor am I now, and yet, further delay seems unnecessary.

To begin, then; somewhere about the middle of August, I turned my face from toil and care, and sought for refuge and recreation at some point distant from Gotham. I found all I required in the flourishing little town of Bridgeport, Connecticut. Others may talk of Newport and Saratoga, of Cape May and Nahant, of Sulpher Springs and Monadnoc, (these are for white aristocrats and black servants;) but the Duncan House, Bridgeport built, owned and kept by A. Duncan, the place where I rested from my labors, is yet to eclipse all these. This new and excellent hotel is located in the best spot in the town, overlooking the bay, the city, and the adjacent country. No other hotel in Bridgeport is thus so finely situated; and as a place of resort and unalloyed pleasure, it offers advantages to the people of color beyond any other yet extant.

Bridgeport gathers up in her grasp various railroads and other communications, and thus permits any access to her bosom; -- hence, gentlemen may bring their families up here and return to their business; and if residing no further than the vicinity of Gotham, may glide to and fro without difficulty, and enjoy at the same time a few hours of unrivalled atmosphere -- a sea bath, and the society of their families and friends. I found many of the best families of New York and suburbs, staying, boarding, living here in the very elegance of enjoyment. 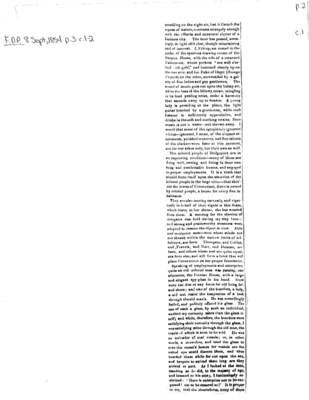 trembling on the night air, lest it disturb the repose of nature, contrasts strangely enough with the effluvia and unnatural clatter of a business city. The hour has passed, seemingly, in light chit chat, though entertaining and of interest. I, Ethiop, am seated in the midst of the spacious drawing rooms of the Duncan House, with the wife of a returned Californian, whose pockets "are well o'erlaid with gold," and buttoned closely up on the one side, and the Duke of Hayti (George Francis) on the other, surrounded by a galaxy of fine ladies and gay gentlemen. The sound of music goes out up the balmy air, while the bass of the billowy ocean, mingling in its loud and pealing notes, make a harmony that ascends away up to heaven. A young lady is presiding at the piano, the light guitar touched by a gentleman, while each listener is sufficiently appreciative, and drinks in the soft and soothing strains. Here music is not a waste - not thrown away. I would that some of the egregiously ignorant whites - ignorant, I mean, of the elegant atttainments, polished manners, and fine talents of the blacks - were here at this moment, not for our sakes only, but their own as well.

The colored people of Bridgeport are in an improving condition - many of them are doing well, owning and living in their own snug and comfortable houses, and engaged in proper employments. It is a truth that should force itself upon the attention of the colored people in the large cities - that thro'out the towns of Connecticut, there is owned by colored people, a house for every five inhabitants.

They are also moving earnestly and vigorously in behalf of their rights in this State, which State, in her shame, she has wrested from them. A meeting for the election of delegates was held during my stay here - and strong and praiseworthy measures were adopted to ensure the object in view. Able and energetic men - men whose minds are not shrunk within the narrow limits of selfishness, are here. Thompson, and Collins, and, Francis, and Burr, and Duncan, are here, and others whose zeal are quite equal, are here also, and will form a lever that will place Connecticut on her proper foundation.

Speaking of employments and enterprize, quite an old colored man was passing, one afternoon, the Duncan House, with a large and elegant spy-glass in his hand. Ours were too dim at any focus for the Long Island shore; and one of the boarders, a lady, could not resist the temptation of a look through the old man's. He was accordingly hailed, and politely offered his glass. The use of such a glass, by such an individual, excited my curiosity more than the glass itself; and while, therefore, the boarders were satisfying their curiosity through the glass, I was satisfying mine through the old man, the result of which is soon to be told. He was an unloader of coal vessels; or in other words, a [stevedore-italics], and used thet glass to scan the ocean's bosom for vessels ere the naked eye could discern them, and thus boarded them while far out upon the sea, and bargain to unload them long ere they arrived in port. As I looked at the man, standing as he did, in the majesty of age, and listened to his story, I [instinctingly?] exclaimed: "Here is the enterprize not to be surpassed! not bo be sneered at!" It is proper to say that the stevedore, many of them 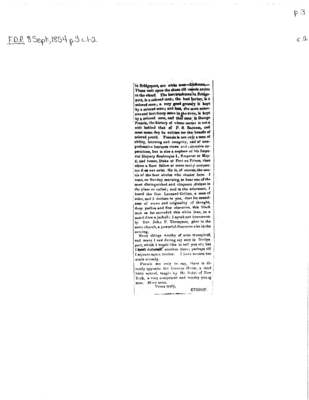 in Bridgeport, are white men - Irishmen. - These wait upon the shore till vessels arrive at the wharf. The best [truckman?] in Bridgeport, is a colored man; the best barber, is a colored man; a very good grocery is kept by a colored man; and last, the most extensive and best fancy store in the town, is kept by a colored man, and that man is George Francis, the history of whose career is not a whit behind that of P.S. [Barnum?], and must some day be written for the benefit of colored youth. Francis is not only a man of ability, learning and integrity, and of comprehensive business views and extensive operations, but is also a nephew of his Imperial Majesty Soulouque I, Emporor of Hayti, and [illegible], Duke of Port au Prince, than whom a finer fellow or more social companion does not exist. He is, of course, the centre of the best circles who cluster here. I went, on Sunday morning, to hear one of the most distinguished and eloquent divines in the place so called; and in the afternoon, I heard the Rev. Leonard Collins, a man of color, and I declare to you, that for soundness of views and originality of thought, deep pathos and fine elocution, this black man as far exceeded this white man, as a camel does a jackall; I speak not irreverently. Rev. John P. Thompson, gave in the same church, a powerful discourse also in the evening.

Many things worthy of note transpired, and many I saw during my stay in Bridgeport, which I would like to tell you of; but I must [defer till?] another time; perhaps till I sojourn again thither. I have written too much already.

Permit me only to say, there is directly opposite the Duncan House, a neat little school, taught by Mr. Parker of New York, a very competent and worthy young man. More anon.