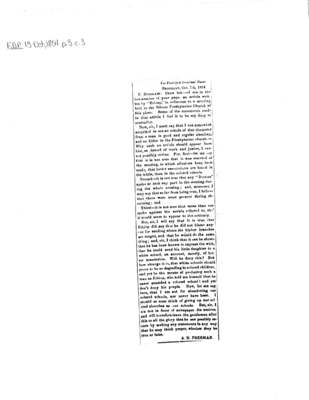 BROOKLYN, Oct. 7th, 1854 F. DOUGLASS: DEAR SIR: - I see in the last number of your paper an article written by "Ethiop," in reference to a meeting held in the Siloam Presbyterian Church of this place. Some of the statements made in that article I feel it to be my duty to contradict.

Now, sir, I must say that I was somewhat surprised to see an article of that character from a man in good and regular standing, and an Elder in the Presbyterian church. Why sucH an article should appear from him, so devoid of truth and justiCe, I cannot possibly divine. For, first -- let me say that it is not true that it was asserted at the meeting, to which allusions have been made, that better associations are found in the white, than in the colored schools.

Second -- it is not true that any "Doctors" spoke or took any part in the meeting during the whole evening; and, moreover, I may say that so far from being true, I believe that there were none present during the evening; and

Third -- it is not true that more than one spoke against the article referred to, tho' it would seem to appear to the contrary.

But, sir, I will say that it is true that Ethiop did say that he did not blame anyone for sending where the higher branches are taught, and that he would do the same thing; and, sir, I think that it can be shown that he has been known to express the wish, that he could send his little daughter to a white school, on account, merely, of better association. Will he deny this? But how strange it is, that white schools should prove to be so degrading to colored children, and yet be the means of producing such a man as Ethiop, who told me himself that he never attended a colored school ! and yet don't deny his people. Now, let me say here, that I am not for abandoning our colored schools, nor never have been. I should as soon think of giving up our colored churches as our schools. But, sir, I am not in favor of newspaper discussions, and will therefore leave the gentleman after this to all the glory that he can possibly secure by making any statements in any way that he may think proper, whether they be true or false.