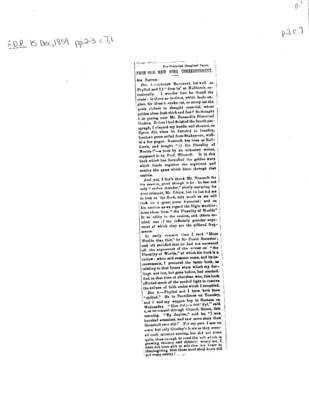 For Frederick Douglass Paper FROM OUR NEW YORK CORRESPONDENT Mr Editor: Dec. 1.--George Bancroft. (as well as Phylbel and I.) "drop in" at Bailliere's,occasionally. I wonder how he found the place: is there an instinct, which leads anglers for ideas to snake out, or snoop out the pools richest in thought material, where golden ideas flash thick and fast? So thought I, in poring over Mr. Bancroft's Historical Oration. Before I had finished the fourth paragraph, I clapped my hands, and shouted, as Byron did, when he detected in Ivanhoe, fourteen gems culled from Shakesphere, within a few pages: Banroft has been at Bailliere's and bought "of the plurality of Worlds!"--a book by an unknown writer, supposed to be Prof. Whowoll. It is this book which has furnished the golden warp which binds together the argument and nestles the gems which blaze through that oration. And yet, I don't thank Mr. Bancroft for his oration, great though it be : he has not only "stolen thunder," slowly maturing for your columns, Mr. Editor, but he has led me to look at the Book, very much as we will look on a great poem travestied: and on his oration as we regard the Elgin marbles: some ideas from "the Plurality of Worlds" fit so oddly in the oration, and others remind one of tThe infinitely grander argument of which they are the pilfered fragments. In early summer time I read "More Worlds than One," by Sir David Brewster; and felt satisfied that he had not answered all the arguments of the writer on "the Plurality of Worlds," of which his book is a review: when mid-summer came, and its bereavements, I procured the latter book, as relating to that future state which my darlings, not lost, but gone before, has reached. And in that time shoreless woe, this book afforded much of the needed light to remove the eclipse of faith under which I stumbled. Dec. 8.--Phylbel and I have both been "spilled." He in Providence on Tuesday, and I and my waggon boy in Gotham on Wednesday. "How did you feel FYL," said I, as he limped through Church Street, this morning. "By Jupiter," said he, "I was knocked senseless, and saw more stars than Herachell ever did!" For my part I saw no stars, but only Charley 's heels as they seemed each moment coming, but did not come quite close enough to rend the veil which is growing thinner and thinner: weary me, I have not been able to stir this icy heart to thanksgiving that those steel shod hoofs did not come nearer!

Last edit 2 months ago by jmckivig 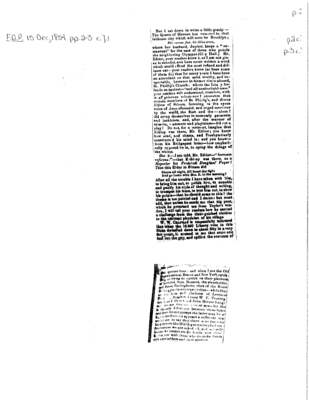 But I sat down to write a little gossip-- The Queen of Heaven has removed to that inchoate city which will soon be Brooklyn; Hic currus fuit, hic illius arma, Where her husband, Jupiter, keeps a "restaurant" for the uses of those who people the neighboring OLympus (City Hall.) Mr. Editor, your readers know that I am not given to scandal, and have never written a word which could offend the most refined and delicate ear--your readers know (at least some of them do) that for many years I have been an attendant on that most worthy, and respectable, however in-formertimes-abused, St. Phillip's Church:nwhere the Lita y for-fends us against--"and all charitableness:" your readers will understand, therefore, with what grevious reluctance I announce that certain members of St. Phillips's, and divers Elders of Siloam, listening to the syren voice of Juno aforesaid, and urged moreover by teh world, the flesh and the--ahem! dis array themselves in unseemly garments and jackboots, and, after the manner of mimers, mummers and playfaiers--did set a play! Do not, for a moment, imaging that Ethiop was there, Mr. Editor; you know how stud, and chaste, and Presbyterianly constructed his mond is; and you know--from his Bridgeport letter--how emphatically opposed he is, to aping the doings of the whites. Dec. 9--I am told, Mr. Editor--"horresco referens!"--The Ethiop was there, as a Reporter for Frederick Douglasss' Paper! That this Elder in Siloam did Dance all night, till broad day light And go home with Mrs. E in the morning! After all the trouble I have taken with him, to bring him out, to show his points--to ennoble and purify his style of thought an writing, to trumpet his fame, to trot him out, to show his points--that he should come to this! the theme is too painful and I desist but must add, that unless he sends me that big pear, which he promised me from taylor's window, I will tell your readers how he carried a challenge from the distinguished clothier to the eminent physician of his village. W. W. CHAPMAN is respectfully informed that when the 10,000 Liberty vote in this State dwindled down to ahest fifty in a very few years, it seemed to me that someone had cut the guy, and spilled the contents of the quarter boat: and when I see the Old Organization at Boston and New York exhibiting or trying to exhibit on their platform of Lecture Sam. Huston, the slaveholder, and Anson Burlinghame, elect of the Know Nothing pro-slavery organization-while they exclude from said platform of Lectures Fredrick Douglass, James W. C. Pennington John I. Gains and John Mercer Langston because they are colored men--for this is the only difference between these latter and those former, except the latter may be of higher intellect--it appears a sufficient reason for me to say that there is no room for black men on the Old Organization platform First because we are asked and secondly because we cannot strike hands with slave holders nor with those who do strike hands with slave holders and their abettors

Last edit about 2 months ago by jmckivig 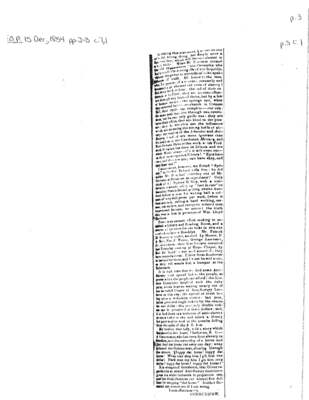 Slavery thruth spread before the people, at prices which the people can afford: the Leotars Committee troubled with tho itchy palm, seems bent on making money out of the so-called Course of Anti-Slavery Loctares in the city: the spread of truth being quite a secondary letter: last year, ladies preffered single tickets for the course for one dollar: this year only double tickets can be procurred at three dollars: and, it is laid down as a voilation of anti-slavery to cut a ticket in two and admit a thiraty bat poor soul to feed on the crumbs falling from the table of tho A. S. host. My mother, dear lady, tells a story which happened in her home . Charleston, S. C.-- A Guinea-man who had risen from slavery to freedom, and the ownership of a horse and had his horse ran away one day: away followed the thu Guinea-man, shouting through the kreoia, "|Toppy dat horse! toppy dat horse! White man stop him I gib him TEN dollar! Black man top him I gib him FIVE dollar! toppy dat horse! toppy dat horse!" It is whispered hereabouts, that Oliver regards this as sound Anti-Slavery doctrine--gives his white lecturers in proportion ten, and his block (lecturer per winter) five dollars for stopping "dat horse." Brother Remond can correct me if I am wrong. Yours effectionaely. COMMUNIPAW.