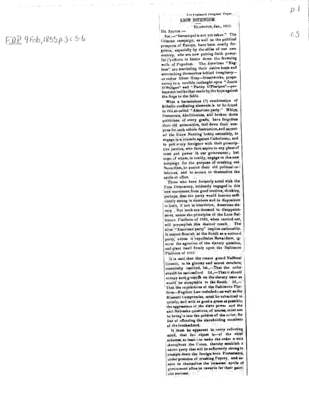 SIR:—"Sevastopol is not yet taken." The Crimean campaign, as well as the political prospects of Europe, have been nearly forgotten, especially by the allies of our own country, who are now putting forth powerful (?) efforts to batter down the frowning walls of Popedom. The American "Raglans" are martialing their native hosts and entrenching themselves behind imaginary— or rather Silver Gray—breastworks, preparatory to a terrible onslaught upon "Jamie O'Muligan" and "Paddy O'Flarigon"—perhaps not unlike that made by the boys against the frogs in the fable.

What a harmonious (?) combination of hitherto conflicting elements is to be found in this so-called "American party". Whigs, Democrats, Abolitionists, and broken down politicians of every grade have forgotten their old animosities, laid down their weapons for reach others destructions, and mounted the Know Nothing hobby ostensibly, to engage in a crusade against Catholicism, and to pelt every foreigner with their proscriptive javelins, who dare aspire to any place of trust and power in our government; but some of whom, in reality, engage in this new campaign for the purpose of crushing out Sewardism, to punish their old political colaborers, and to secure to themselves the spoils of office.

Those who have formerly acted with the Free Democracy, evidently engaged in this now movement from good motives, thinking, perhaps, that the party would become sufficiently strong in numbers and in disposition to limit, if not to overthrow, American slavery. But such are doomed to disappointment, unless the principles of the Loco Baltimore Platform of 1852, when carried out, will accomplish this desired result. The term "American party" implies nationality. It cannot flourish at the South as as a national party, unless it repudiates Sewardism, ignores the agitation of the slavery question, and plant itself firmly upon the Baltimore Platform of 1852.

It is said that the recent grand National Council, in its gloomy and secret conclave, essentially resolved, 1st.,—That the order should be nationalized. 2d.,—That is should occupy such grounds on the slavery issue as would be acceptable in the South. 3d.,— That the requisitions of the Baltimore Platform—Fugitive Law included—as well as the Missouri Compromise, must be submitted to quietly, and with as good a grace as possible; the aggressions of the slave power and the anti-Nebraska questions, of course, must not be brought into the politics of the order, for fear of offending the slaveholding members of the brotherhood.

It must be apparent to every reflecting mind, that the object is—of the chief schemes, at least—to make the order a unit throughout the Union, thereby establish a native party that will be sufficiently strong to trample down the foreign-born Protestants, under pretence of crushing Popery, and secure to themselves the immense spoils of government office as rewards for the patriotic services.

Last edit 4 months ago by swartzsm 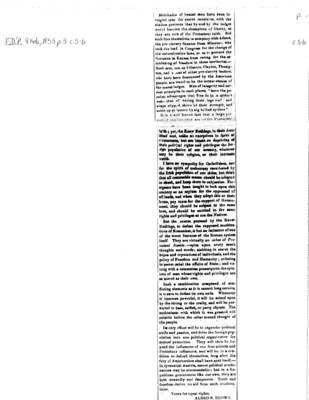 Multitudes of honest men have been inveigled into the secret conclaves, with the shallow pretence that by-and-by the lodges would become the champions of liberty, as they are now of the Protestant faith. But such find themselves in company with Adams, the pro-slavery Senator from Missouri, who took the lead in Congress for the change of the naturalization laws, so as to prevent the Germans in Kansas from voting for the establishing of freedom in those territories.— Such men, too, as Fillmore, Clayton, Thompson, and a host of other pro-slavery leaders, who have been denounced by the American people, are found to be the corner-stones of the secret lodges. Men of integrity and correct principles in such places, "have the poculiar advantages that flies do in a spider's web—that of having their legs tied and wings clipped, born of their strength, and eaten up at leisure by big bellied spiders"

It is a well known fact that a large portion of the Germans are of the Protestant faith, yet the Know Nothings, in their [?- ?] zeal, make no exceptions in favor of Protestants, but are intent on depriving of their political rights and privileges the foreign population of our country, whatever may be their religion, or their intrinsic worth.

I have no sympathy for Catholicism, nor for the spirit of [moboorsey] manifested by the Irish population of our cities, but think that all reasonable means should be adopted to check, and keep tem in subjection. Foreigners have been taught to look upon this country as an asylum for the oppressed of all lands, and when they adopt this as their home, pay taxes for the support of the Government, they should be subject to the same laws, and should be entitled to the same rights and privileges as are the Natives.

But the course pursued by the KnowNothings, to defeat the supposed machinations of Romanism, is but an imitation of one of the worst features of the Roman system itself. The are virtually an order of Protestant Jesuits:—spies upon every man's thoughts and words; stabbing in secret the hopes and reputations of individuals, and the policy of Freedom and Humanity; ordering in secret cabal the affairs of State; and visiting with remorseless prescription the opinions of men whose rights and privileges are as sacred as their own.

Such a combination composed of conflicting elements as it is cannot long survive, it is sure to defeat its own ends. Whenever it becomes powerful, it will be seized upon by the strong or the crafty, and will be perverted to base, selfish, or party objects. The enthusiasm with which it was greeted will subside before the sober second thought of the people.

Its only effect will be to engender political strife and passion, and drive the foreign population into one political organization for mutual protection. They will then be beyond the influences of our free schools and Protestant influences, and will be in a condition to defend themselves, long after the fury of Americanism shall have put itself.— In tyrannical Austria, secret political combinations may be commendable; but in a Republican government like our own, they are both cowardly and dangerous. Truth and freedom derive no aid from such combinations.

Last edit 4 months ago by swartzsm
Displaying all 2 Page