ReadAboutContentsHelp
Ohio to Frederick Douglass. PLSr: Frederick DouglassP, 16 March 1855. Compares the quick admittance of Texas as a state to the hesitance of the federal government in sending diplomats to Haiti. 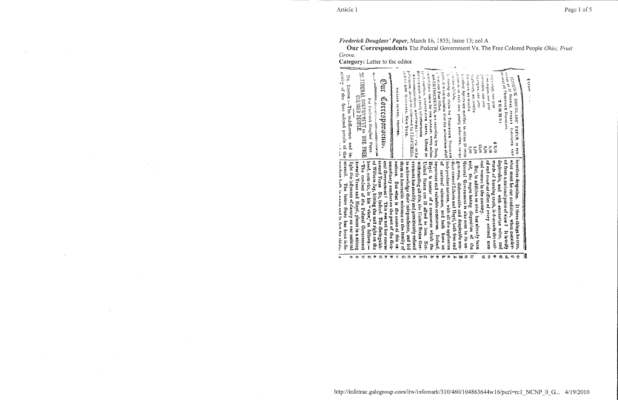 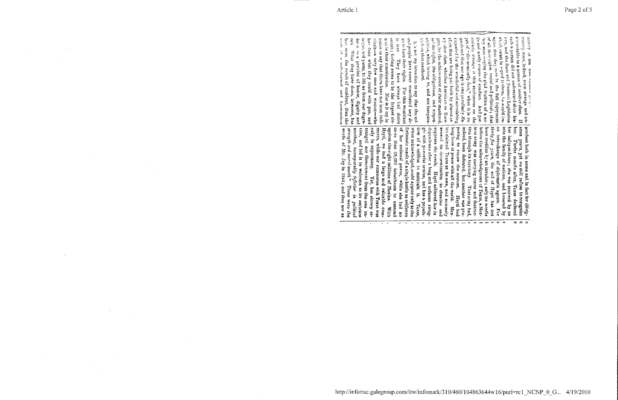 activity of [illegible] country must, indeed seem strange and unaccountable to a person of another class. If such a person did not understand their history, and the State and National Legislation which exists in regard to them, he would imagine that there were in the the full enjoyment of all their rights, social and political; that they were reaping the glad fruition of a noble and manly course of conduct. And particularly strange in this supineness on the part of the "nominally fee," when it is remembered that our ego is one peculiarly distinguished for the wonderful and astonishing efforts that are being put forth by almost every other class, whether American or European, for the achievement of their manhood, and the rights, the obligations, and responsibilities, which belong to, and ar inseparable from that manhood.

It is not my intention to say that the colored people have never manifested any desire to have their rights. For this would not be true. They have always had desire enough; feeling seems to be the largest element in their constitution. Nor is it my intention to say that there have not been individuals - a very few men and women - who have done what thay could with pen, and tongue, and purse, to lift us from our degradation to a position of honor, dignity and rank. What they have done, however, has been more the result of accident, than the [illegible] of a well-devised and harmonious

pendent both in name and in fact for thirtyseven years, yet we still recognize her. Twelve months after, Texas declared her independence; she was received by us into the family of nations, and honored by an interchange of diplomatic agents. For thirty five years, the soil of Hayti has not been trodden by an invader; only ten months before the acknowledgment of Texas, a Mexican army was carrying terror and destruction through its territory. That army had, indeed, been defeated, but another was preparing to renew the contest. Hayti had long been at peace with all the world. Mexico claimed Texas as its own, and solemly avowed its determination to chastise and suppress the revolt. Hayti achieved her independence after a long and arduous struggle with powerful armies, and has a population of a million to maintain it. Texas, when acknowledged, could appear only to the fortunate result of a single battle as evidence of her national power, while she had no more than [60,000?] inhabitants to contend against the eight millions of Mexico. With Hayti, we had a large and valuable commerce, while our commerce with Texas was only in expectancy. Yet, has slavery estranged our Government form the one nation, and led it to welcome to its embrace another, incomparably inferior in political strength and moral worth" These were the words of Mr. Jay in 1844; and they are as 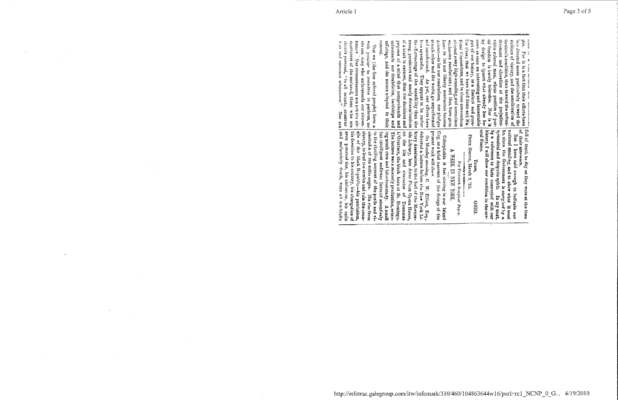 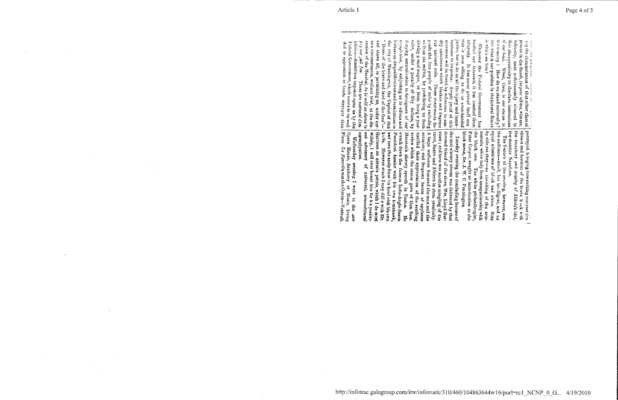 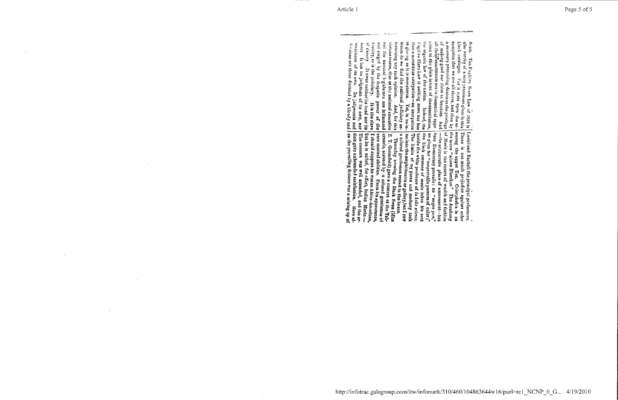 death. The Fugitive Slave Law of 1850 is also worthy of a prominent place in this black catalogue. For it rests upon the assumption that we are all slaves, and then by a summary proceeding denies us privilege of making good our claim to freedom. And all these enactments are in diametrical opposition to the plain intent of the constitution, the organic law of the nation. Indeed, the Fugitive Slave Law is nothing more nor less than a monstrous usurpation - an usurpation as glaring as it is monstrous. Yet, in no instance do we find the national judiciary entertaining any such opinion. And, for this obvious reason, that as the national executive and the national legislature are influenced and surged by the despotic power of the country, so it the judiciary. It is the slave of slavery. It owns neither its head nor its heart. It has no judgment of its own, nor conscience of its own. Its judgments and decisions are those dictated by a bloody and

Lovini and Bacbali the principal performers. There is not much prejudice against color among the upper Ten. Colorphobia is on the move "above Bleecker." The Academy of Music is the resort of wealth and fashion - the aristocratic place of amusement - but here Democracy prevails: no "negro pew," no place for "respectable persons of color;" the black amateur of music takes his seat beside the white professor of la belle science. The limits of my purse and modesty took me into the ampitheatre or gallery, but I saw a colored gentleman seated in the boxes.

Thursday evening the Black Swan (Miss E.T. Greenfield) gave a concert at the Tabernacle, assisted by a colored gentleman of rare musical abilities. From his appearance, I should suppose he was an Africa-American, but he is called, for effect, Indian Mario. - the concert was well attended, and the artists gave unbounded satisfaction. Here also the prevailing feature was a mixlog up of

Last edit 2 months ago by tarshalj
Displaying all 5 Page