ReadAboutContentsHelp
A[bner] H. Francis to Frederick Douglass. PLSr: Frederick Douglass P, 22 September 1854. Supports his change in position on the issue of slavery in the Constitution; encourages all abolitionists to do the same; describes affairs in Oregon. 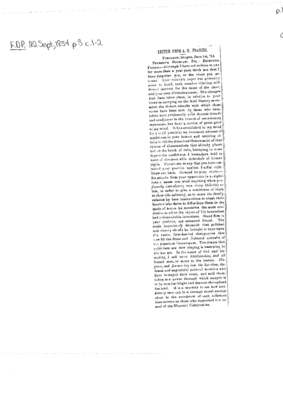 LETTER FROM A. H. FRANCIS

FREDERICK DOUGLASS, ESQ[.]: ESTEEMED FRIEND:—Although I have not written to you for more than a year past, think not that I have forgotten you, or the cause you espouse. Your valuable paper has generally come to hand, each number eliciting still deeper interest for the cause of the slave, and your own ultimate success. The changes that have taken place, in relation to your views in carrying on the Anti Slavery movement, the violent attacks with which those views have been met by those who heretofore were professedly your dearest friends and coadjutors in the branch of reformatory movement, has been a source of great grief to my mind. It has established in my mind for you (if possible) an increased amount of confidence in your honest and untiring efforts to rid the American Government of that system of abominations that already places her on the brink of ruin, betraying in some degree the confidence I heretofore held in some of the most able defenders of human rights. Permit me to say that you have sustained your position against fearful odds[.] Draw not back. Onward be your motto.— No attacks from your opponents in a righteous a cause can avail anything when professedly anti-slavery men stoop (falsely) so low, in order to give a semblance of truth to their vile calumny, as to enter the family relation by base insinuations to crush their brother who dares to differ from them in the mode of action he conceives the most conclusive to effect the object of his benevolent and commendable intentions. Stand firm to your position, my esteemed friend. The crisis imperiously demands that political anti slavery should be brought to bear upon the rotten, false hearted demagogues that now fill the State and National councils of the American Government. The drama that politicians are now playing is hastening to the last act. In the name of God and humanity, I call upon Abolitionists, and all honest men, to come to the rescue. Displace, and forever lay low the heartless, dishonest and ungrateful political wretches who have betrayed their trust, and sold themselves to a power through which naught is to be seen but blight and decease throughout the land. It is a mystery to me how antislavery men can look through moral suasion alone to the overthrow of such infamous time servers as those who supported the repeal of the Missouri Compromise. 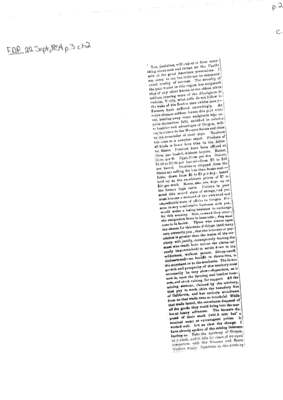 You, doubtless, will expect to hear something about men and things on the Pacific side of the great American possessions. I am sorry to say but little can be communicated worthy of interest. The severity of the past winter in this region has surpassed that of any other known to the oldest white settlers, causing some of the Aborigines to exclaim, Verily, what evils do not follow in the wake of the Boston man (white man)— Farmers have suffered exceedingly. An ocean steamer seldom leaves this port without bearing away some emigrants who express themselves fully satisfied in relation to beauties and advantages of Oregon, willing to return to the Western States and close up the remainder of their days. Business has come to a complete stand. Produce of all kinds is lower here than in the Atlantic States. Potatoes have been offered at 30cts. per bushel, without buyers. Butter, 25cts. per lb. Eggs, 25cts. per doz. Onions, $1[,]50 to $2,00 per bushel—from $9 to $10 per barrel. Provisions shipped from the States are selling for less than home cost.— Labor down from $1 to $3 per day; board held up at the exorbitant prices of $7 to $10 per week[.] Rents, also, are kept up at the former high rates. Picture in your mind this mixed state of things, and you must become convinced of the awkward and unprofitable state of affairs in Oregon. Persons in any comfortable business with you, would make a losing business to exchange for this country. Still, onward they come; the emigration fever is incurable; they must come to be healed. Those who reason upon the causes for this state of things, (and many very correctly,) viz, that the increase of population is greater than the wants of the territory will justify, consequently leaving the mass who reach here across the plains (already impoverished) to settle down in the wilderness, without means, disappointed, disheartened—no benefit to themselves, to the merchant or to the mechanic. The future growth and prosperity of this territory must necessarily be very slow—dependent, as it now is, upon the farming and lumber interests, and stock raising, for support[.] All the mining sections, claimed by the territory, that pay to work, skirt the boundary line of California, and has entirely withdrawn from us that trade once so beneficial. While that trade lasted, the merchants disposed of all the goods they could bring into the market at heavy advances. The farmers disposed of their stock (which cost but a nominal sum) at extravagant prices. It worked well. Let us view the change. I have already spoken of the mining interests leaving us. Take the territory of Oregon, as a whole, and it falls fall short of an equal comparison with the Western and South Western States. Hundreds in this territory 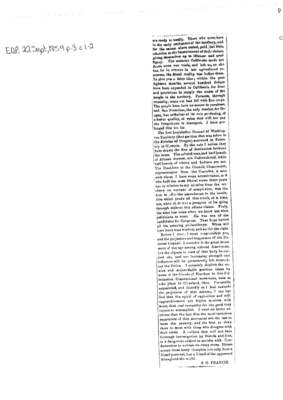 are ready to testify. Those who came here in the early settlement of the territory, and for the causes above stated, paid but little attention to the improvement of their claims, giving themselves up to idleness and profligacy. The moment California made her draws upon our trade, and left us, as she has, far in arrears in her agricultural re[sourses?], the dread reality was before them. To give you a faint idea; within the past eighteen months, several hundred dollars have been expended in California for flour and provisions to supply the wants of the people in the territory. Farmers, through necessity, came out last fall with fine crops. The people here have no means to purchase; and San Francisco, the only market for Oregon, has sufficient of its own producing, of a better quality, at rates that will not pay the Oregonians to transport. I have prolonged this too far.

The first Legislative Council of Washington Territory (that portion that was taken in the division of Oregon) convened in February at Olympia. By the acts I notice they have drawn the line of distinction between the races. The colored man, and half-breeds of African descent, are disfranchised, while half breeds of whites and Indians are not. The President of the Council, Chenoworth, representative from the Cascades, a man with whom I have some acquaintance, and who held the most liberal views three years ago in relation to my ejection from the territory on account of complexion, was the first to offer the amendment to the resolution which produced this result, at a time, too, when their [sic] was a prospect of its going through without this odious clause. Truly, the time has come when we know not what politicians to trust. He was one of the candidates for Congress. That hope buried all his amazing philanthropy. When will man learn true wisdom, and act for the right.

Before I close, I must congratulate you, and the projectors and supporters of the National Council. I consider it the great movement of the age among colored Americans. Let the objects in view of that body be carried aout, and our increasing strength and influence will be permanently felt throughout the Union. I certainly deplore the unwise and unjustifiable position taken by some of the friends of Freedom in this Colonization Conventional movement, soon to take place in Cleveland, Ohio. Personally acquainted, and friendly as I feel towards the projectors of that scheme, I can but feel that the spirit of opposition and selfaggrandizement are higher motives with some, than real sympathy for the good they expect to accomplish. I want no better evidence than the fact that the most tenacious supporters of that movement are the last to leave the country, and the first to deny those to meet with them who disagree with their views. A subject that will not bare [sic] thorough investigation by friends and foes, is a dangerous subject to meddle with. Condemnation is written on every move. Please accept these hasty thoughts not only from a friend personal, but a friend of the oppressed throughout the world.