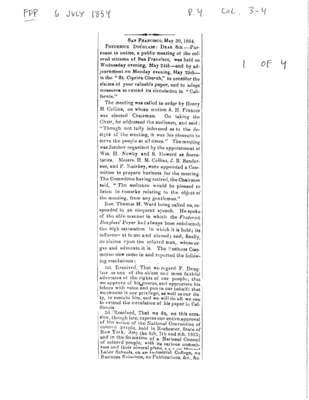 FREDERICK DOUGLASS: DEAR SIR:—Pursuant to notice, a public meeting of the colored citizens of San Francisco, was held on Wednesday evening, May 24th—and by adjournment on Monday evening, May 29th— in the "St. Ciprian Church," to consider the claims of your valuable paper, and to adopt measures to extend its circulation in "California."

The meeting was called to order by Henry M. Collins, on whose motion A. H. Frances was elected Chairman. On taking the Chair, he addressed the audience, and said: "Though not fully informed as to the designs of the meeting, it was his pleasure to serve the people at all times." The meeting was further organized by the appointment of Wm. H. Newby and S. Howard as Secretaries. Messrs. H. M. Collins, J. B. Sanderson, and F. Smithey, were appointed a Committee to prepare business for the meeting, The Committee having retired, the Chairman said, "The audience would be pleased to listen to remarks relating to the object of the meeting, from any gentleman."

Rev. Thomas M. Ward being called on, responded in an eloquent speech. He spoke of the able manner in which the Frederick Douglass' Paper had always been conducted; the high estimation in which it is held; its influence at home and abroad; and, finally, its claims upon the colored man, whose organ and advocate it is. The Business Committee now came in and reported the following resolutions:

1st. Resolved, That we regard F. Douglass as one of the ablest and most faithful advocates of the rights of our people; that we approve of his course, and appreciate his labors with voice and pen in our behalf; that we esteem it our privilege, as well as our duty, to sustain him, and we will do all we can to extend the circulation of his paper in California.

2nd. Resolved, That we do, on this occasion, though late, express our entire approval of the action of the National Convention of colored people, held in Rochester, State of New York, July the 6th, 7th and 8th, 1853; and in the formation of a National Council of colored people, with its various committees and their several plans, [vz:] on Manual Labor Schools, on an Industrial College, on Business Relations, on Publications, &c., &c. 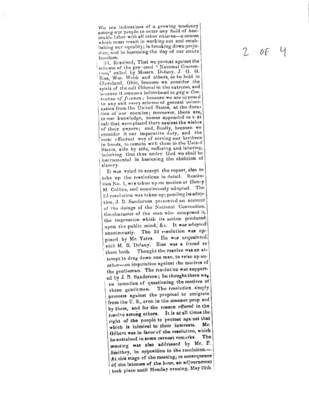 We see indications of a growing tendency among our people to enter any field of honorable labor with all other citizens—a course which must result in working out and establishing our equality; in breaking down prejudice, and in hastening the day of our entire freedom.

3d. Resolved, That we protest against the scheme of the proposed "National Convention," called by Messrs. Delaney, J. G. G. Bias, Wm. Webb and others, to be held in Cleveland, Ohio, because we consider the spirit of the call illiberal in the extreme, and because it assumes before hand to gag a Convention of freemen; because we are opposed to any and every scheme of general colonization from the United States, at the dictation of our enemies; moreover, there are, to our knowledge, names appended to that call that were placed there against the wishes of their owners; and finally, because we consider it our imperative duty, and the most effectual way of serving our brethren in bonds, to remain with them in the United States, side by side, suffering and laboring, believing that thus under God we shall be instrumental in hastening the abolition of slavery.

It was voted to accept the report, also to take up the resolutions in detail. Resolution No. 1, was taken up on motion of Henry M. Collins, and unanimously adopted. The 2d resolution was taken up; pending its adoption, J. B. Sanderson presented an account of the doings of the National Convention, the character of the men who composed it, the impression which its action produced upon the public mind, &c. It was adopted unanimously. The 3d resolution was opposed by Mr. Yates. He was acquainted with M. R. Delany. Bias was a friend to them both. Thought the resolve was an attempt to drag down one man, to raise up another—an imputation against the motives of the gentleman. The resolution was supported by J. B. Sanderson; he thought there was no intention of questioning the motives of those gentlemen. The resolution simply protests against the proposal to emigrate from the U.S., even in the manner propoesd by them, and for the reason offered in the resolve among others. It is at all times the right of the people to protest against that which is inimical to their interests. Mr. Gilbert was in favor of the resolution, which he sustained in some earnest remarks. The meeting was also addressed by Mr. F. Smithey, in opposition to the resolution.— At this stage of the meeting, in consequence of the lateness of the hour, an adjournment took place until Monday evening, May 29th. 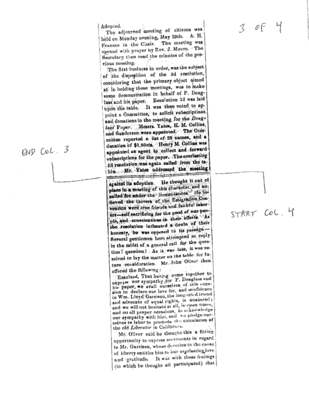 Adopted. The adjourned meeting of citizens was held on Monday evening, May 29th. A.H. Frances in the Chair. The meeting was opened with prayer by Rev. J. Moore. The Secretary then read the minutes of the previous meeting.

The first business in order, was the subject of the disposition of the 3d resolution, considering that the primary object aimed at in holding these meetings, was to make some demonstration in behalf of F. Douglass and his paper. Resolution 3d was laid upon the table. It was then voted to appoint a Committee, to solicit subscriptions and donations in the meeting for the Douglass Paper. Messrs. Yates, H.M. Collins, and Sanderson were appointed. The Committee reported a list of 28 names, and a donation of $1,80cts. Henry M. Collins was appointed an agent to collect and forward subscriptions for the paper. The everlasting 3d resolution was again called from the table. Mr. Yates addressed the meeting against its adoption. He thought it out of place in a meeting of this character, and uncalled for under the [circumstances?]. He believed the [movers?] of the Emigration Con[vention?] were true friends and faithful laborers - self-sacrificing for the good of our people, and conscientious in their effors. As the resolution intimated a doubt of their honesty, he was opposed to its passage. Several gentlemen here attempted to reply in the midst of a general call for the question! question! As it was late, it was resolved to lay the matter on the table for future consideration. Mr. John Oliver then offered the following:

Resolved, That having come together to express our sympathy for F. Douglass and his paper, we avail ourselves of this occasion to declare our love for, and confidence in Wm. Lloyd Garrison, the long-tried [friend?] and advocate of equal rights, is unabated; and we will not hesitate at all, in open times, and on all proper occasions, to acknowledge our sympathy with him, and we pledge ourselves to labor to promote the circulation of the old Liberator in California.

Mr. Oliver said he thought this a fitting opportunity to express sentiments in regard to Mr. Garrison, whose devotion to the cause of liberty entitles him to our everlasting love and gratitude. It was with these feelings (in which he thought all participated) that

Last edit about 1 year ago by lds7 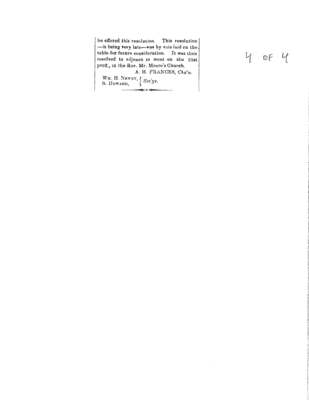 he offered this resolution. This resolution - it being very late - was by vote laid on the table for future consideration. It was then resolved to adjourn to meet on the 21st prox., in the Rev. Mr. Moore's Church.