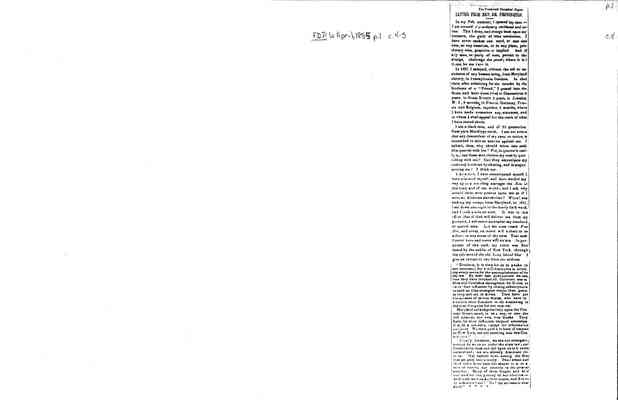 In my Feb. number, I opened my case -I am accused of pro-slavery sentiment and action. This I deny, and charge back upon my accusers, the guilt of fake accuation. I have never spoken one word, or cast one vote, on any occasion, or in any place, proslavery wise, possitive or implied. And if any man, or party of men, persist in the charge, challenge the proof: where is it? Come, let me have it.

In 1827, I escaped, without the aid or assistance of any human being, from Maryland slavery to Pennsylvania freedom. In that state, after subsisting for six months by the kindness of a "Friend," I passed into the State, and have since lived in Connecticut 8 years, in Great Britain 2 years, in Jamaica W. I, 8 months in France, Germany, Prussia and Belgium, together 3 mnths, where I have made numerous acquaintances, and to whom I shall appeal for the truth of what I have stated above.

I am a black man, and of 3d generation from pure Mandingo stock. I am not aware that any descendant of my race, or nation, is concerned in this accusation against me. I submit, then, why should white men seek this quarrel with me? For, (a quarrel it really is,) can these men elevate my race by quarrelling with me? Can they emancipate my enslaved brethren by abusing, and misrepresenting me? I think not.

Like a man, I have emancipated myself, I have educated myself, and have worked my way up to a standing amongst the Men of this land, and of the world; and I ask, why should these men pounce upon me as if I were an Alabama slaveholder? When I was making my escape from Maryland, in 1827. I sat down one night in the lonely dark wood, and I took a solemn oath. It was to this effect that if God will deliver me from my pursuers, I will never surrender my manhood to mortal man. Let me once reach Free Soil, and never, no, never, will submit to be a slave, in any sense of the term. That oath I never have and never will violate. In pursuance of this oath, my voice was first heard by the public of New York, through the columns of the old Long Island Star. I give an extract or two from the address.

"Brethren, it is time for us to awake to our interests; for the Colonization is straining every nerve for the accomplishment of its objects. By their last publication we see, that they have invoked all Christian assemblies and Churches throughout the Union, to exert their influence by raising subscriptions to send us (the strangers within their gates, as they call us) to Africa. They have got the consent of eleven States, who have instructed their Senators to do something in the next Congress for our removal.

Maryland calls imperatively upon the General Government, to [?us] a way, or else she will colonize her own free blacks. They have, by their influence stopped emancipation, in a measure, except for colonization purposes. We once paid a tribute of respect to New York, for not entering into this Confederacy."

"Finally, brethren we are not strangers; neither do we come under the alien law; our Constitution does not call upon us to become naturalized; we are already American citizens. Our fathers were among the first that peopled this country. Their sweat and their tears have been the means in a measure of raising our country to its present standing. Many of them fought and bled and died for the gaining of her liberties -And shall we forsake their tombs, and flee to an unknown land? No! let us remain over them." * * * *

Last edit about 2 months ago by Jannyp
1 record