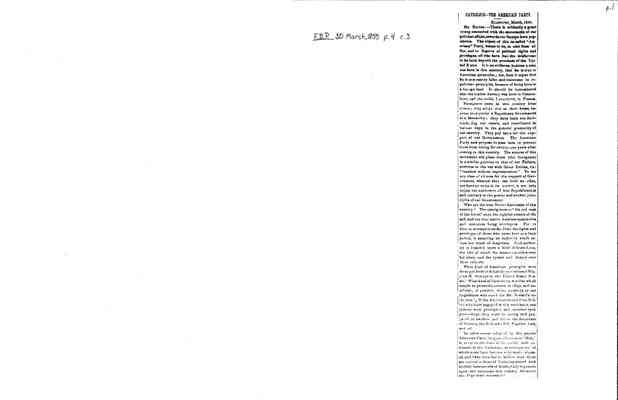 CATHOLICS-THE AMERICAN PARTY. -----ELLINGTON, March, 1855. Mr. Editor:--- There is evidently a great wrong connected with the movements of our political affairs, towards our foreign-born population. The object of this so called "American" Party, seems to be, to oust from office, and to deprive of political rights and privileges, all who have had the misfortune to be born beyond the precincts of the United States. It is no evidence, because a man was born in this country, that he is true to American principles; nor, does it argue that he is necessarily false and traitorous to republican principles, because of being born in a foreign land. It should be remembered that the traitor ARNOLD was born in Connecticut, and the noble LAFAYETTE, in France.

Foreigners come to this country from choice; they adopt this as their home because they prefer a Republican Governent to a Monarchy; they have built our Railroads, dug our canals, and contributed in various ways to the general prosperity of our country. They pay taxes for the support of our Government. The American Party now propose to pass laws to prevent them from voting for twenty-one years after coming to this country. The success of this movement will place them (the foreigners) in a similar position to that of our Fathers, previous to the war with the Great Britian, viz: "taxation without representation." To tax any class of citizens for the support of Government, wherein they can hold no office, nor have no voice in its control, is not only unjust but subversive of true Republicanism and contrary to the genius and avowed principles or our Government.

Who are the true Native Americans of this country? The aboriginees, -- "the red men of the forest" were the rightful owners of the soil, and the true native Americans, ourselves and ancestors being interlopers. For us then to attempt to strike down the rights and privileges of those who came here at a later period, is assuming an authority which savors too much of despotism. Such authority is founded upon a kind of brute force, the like of which the master exercises over his slave, and the tyrant and despot over their subjects.

What kind of American principles were those put forth to defeat the re-election of WILLIAM H. SEWARD to the United States Senate? What kind of Democracy was that which sought to proscribe, -- burn in effigy, and annihilate, if possibly, those members of our Legislature who voted for Mr. Seward's reelection? If the Abolitionists and Free Soilers who have engaged in this movement, can indorse such principles, and sanction such proceedings, they must be pretty well prepared to swallow and digest the despotism of Slavery, the Nebraska Bill Fugitive Law, and all.

An other course adopted by this pseudo American Party, to gain adherents to "Sam" is, to excite the fears of the public with reference to the Catholics; in consequence of which some have become very much alarmed, and have been led to believe that there are several millions of Catholics armed with terrible instruments of death, ready to pounce upon, and subjugate this country whenever the Pope shall command!

Last edit about 2 months ago by Jannyp 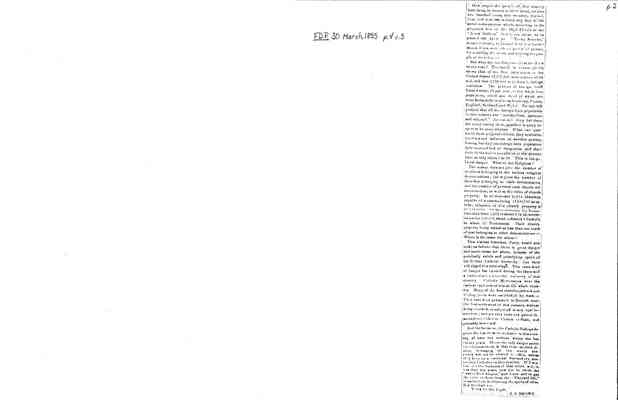 How stupid the people of this country have been, to cherish in their midst, for over two hundred years, this monster, Catholicism, and that too without any fear of the awful consequence which according to the prophetic ken of the High Priests of the "Know Nothing" Order are about to be poured out upon us. "Young America," should certainly be rewarded with a [leather?] model, if not with thy pieces of pewter, for sounding the alarm and wanting the people of their danger.

But what are the dangers -- what the facts in the case? The last U. S. census (1850) shows that of the free inhabitants of the United States 17,737,505 were natives of its soil, and that 2,210,800 were born in foreign countries. The persons of foreign birth formed about 11 per cent of the whole free population, about one third of which are from Ireland, the rest from Germany, France, England, Scotland and Wales. No one will pretend that all the foreign born population in this country are "incompetent, ignorant and debased." No one will deny but there are many among them qualified in every respect to be good citizens. If but one quarter of them are good citizens, they neutralize the votes and influence of another quarter, leaving but half the foreign born population to be counted bad or dangerous, and their ratio to the native population at the present time as only about 1 to 20. This is the political danger. What of the Religious?

This zealous American Party, would also make us believe that there is great danger and much cause for alarm, because of the peculiarly subtle and proselyting spirit of the Roman Catholic hierarchy. But facts will dispel this subterfuge. This same kind of danger has existed during the three and a half centuries since the discovery of this country. Catholic Missionaries were the earliest explorers of almost the whole country. Many of the first churches, schools and trading posts were established by them -They have been permitted to flourish, since the first settlement of this country, without being checked, or subjected to any legal restriction; and yet they have not gained the ascendency either in Church or State, and probably never will.

And furthermore, the Catholic Bishops deplore the loss from their church in this country, of over two millions, within the last twenty years. Hence, the only danger under the circumstances, is, that these modern Jesuits, belonging to the secret conclaves will not be elected to office, unless they keep up a continual hue-and-cry concerning Catholics in this country. If I mistake but the Sachems of this order, will, in less than five years bow low to catch the "sweet Irish brogue," and lower still to get the votes of those from the "Emerald Isle," to assist them in obtaining the spoils of office. But we shall see.

Yours for the Right A.N. BROWN

Last edit about 2 months ago by Jannyp
All 2 records