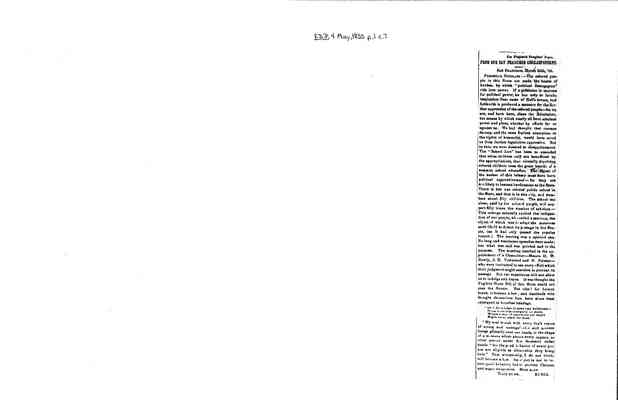 For Frederick Douglass' Paper. FROM OUR SAN FRANCISCO CORRESPONDENT.

Frederick Douglass: - The colored people in this State are made the beasts of burden, by which "political demogogues" ride into power. If a politician is anxious for political power, he has only to invoke inspiration from some of Hell's muses, and forthwith is produced a measure for the further oppression of the colored people - for we are, and have been, since the Revolution, the means by which nearly all have attained power and place, whether by efforts for or against us. We had thought that common decency, and the most limited conception of the rights of humanity, would have saved us from further legislative oppression. But in this, we were doomed to disappointment. The "School Law" has been so amended that white children only are benefitted by the appropriations, thus virtually depriving colored children from the great benefit of a common school education. The object of the author of this infamy must have been political aggrandizement - for they are not likely to become burdensome to the State. There is but one colored public school in the State, and that is in this city, and numbers about fifty children. The school tax alone, paid by the colored people, will support fifty times the number of scholars -This outrage naturally excited the indignation of our people, who called a meeting, the object of which was to adopt the measures most likely to defeat its passage in the Senate, (as it had only passed the popular branch.) The meeting was a spirited one. No long and wearisome speeches were made; but what was said was pointed and to the purpose. The meeting resulted in the appointment of a Committee - Messrs H. W. Newly, J. H. Townsend and N. Pointer -- who were instructed to use every effort which their judgment might sanction to prevent its passage. But our experience will not allow us to indulge any hopes. It was thought the Fugitive Slave Bill of this State could not pass the Senate. But alas! for human hopes, it became a law; and hundreds who thought themselves free, have since been consigned to hopeless bondage.

"Oh! for a lodge in some vast wilderness - Some boundless contiguity of shade, Where rumor of oppression and deceit Might never reach me more"

"My soul is sick with every day's report of wrong and outrage" - for still another hangs gloomily over our heads, in the shape of a measure which places every captain, or other person under five thousand dollar bonds "for the good behavior of every person not eligible to citizenship they bring here." This monstrosity, I do not think, will become a law. Its object is not to insure good behavior, but to prevent Chinese and negro emigration. More anon].