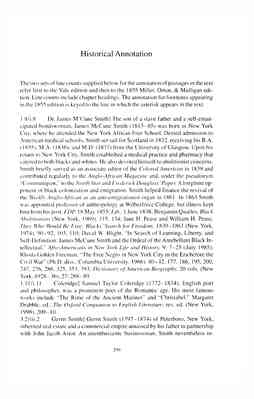 The two sets of line counts supplied below for the annotation of passages in the text refer first to the Yale edition and then to the 1855 Miller, Orton, & Mulligan edition. Line counts include chapter headings. The annotation for footnotes appearing in the 1855 edition is keyed to the line in which the asterisk appears in the text. 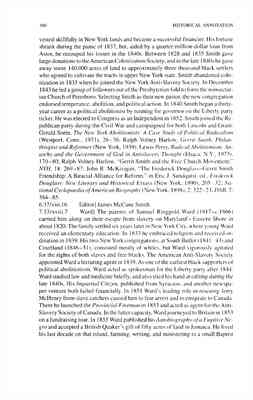 vested skillfully in New York lands and became a successful financier. His fortune shrank during the panic of 1837, but, aided by a quarter-million-dollar loan from Astor, he recouped his losses in the 1840s. Between 1828 and 1835 Smith gave large donations to the American Colonization Society, and in the late 1840s he gave away some 140,000 acres of land to approximately three thousand black settlers who agreed to cultivate the tracts in upper New York state. Smith abandoned colonization in 1835 when he joined the New York Anti-Slavery Society. In December 1843 he led a group of followers out of the Presbyterian fold to form the nonsectarian Church of Peterboro. Selecting Smith as their new pastor, the new congregation endorsed temperance, abolition, and political action. In 1840 Smith began a thirty-year career as a political abolitionist by running for governor on the Liberty party ticket. He was elected to Congress as an Independent in 1852. Smith joined the Republican party during the Civil War and campaigned for both Lincoln and Grant. Gerald Sorin, The New York Abolitionists: A Case Study of Political Radicalism (Westport, Conn., 1971), 26-38; Ralph Volney Harlow, Gerrit Smith, Philanthropist and Reformer (New York, 1939); Lewis Perry, Radical Abolitionism: Anarchy and the Government of God in Antislavery Thought (Ithaca, N. Y., 1973), 170-80; Ralph Volney Harlow, "Gerrit Smith and the Free Church Movement," NYH, 18: 269-87: John R. McKivigan, "The Frederick Douglass—Gerrit Smith Friendship: A Biracial Alliance for Reform," in Eric J. Sundquist. ed., Frederick Douglass: New Literary and Historical Essays ( New York, 1990), 205-32: National Cyclopaedia of American Biography (New York, 1898), 2: 322-23; DAB, 7: 384-85. 6.37/viii.16 Editor] James McCune Smith 7.33/xviii.7 Ward] The parents of Samuel Ringgold Ward (1817-c.1866) carried him along on their escape from slavery on Maryland's Eastern Shore in about 1820. The family settled six years later in New York City, where young Ward received an elementary education. In 1833 he embraced religion and received ordination in 1839. His two New York congregations, at South Butler (1841-43) and Courtland (1846-51), consisted mostly of whites, but Ward vigorously agitated for the rights of both slaves and free blacks. The American Anti-Slavery Society appointed Ward a lecturing agent in 1839. As one of the earliest black supporters of political abolitionism, Ward acted as spokesman for the Liberty party after 1844. Ward studied law and medicine briefly, and also tried his hand at editing during the late 1840s. His Impartial Citizen, published from Syracuse, and another newspaper venture both failed financially. In 1851 Ward's leading role in rescuing Jerry McHenry from slave catchers caused him to fear arrest and to emigrate to Canada. There he launched the Provincial Freeman in 1853 and acted as agent for the Anti-Slavery Society of Canada. In the latter capacity, Ward journeyed to Britain in 1853 on a fundraising tour. In 1855 Ward published his Autobiography of a Fugitive Negro and accepted a British Quaker's gift of fifty acres of land in Jamaica. He lived his last decade on that island, farming, writing, and ministering to a small Baptist 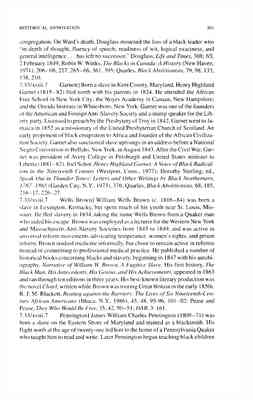 congregation. On Ward's death, Douglass mourned the loss of a black leader who "in depth of thought, fluency of speech, readiness of wit, logical exactness, and general intelligence...has left no successor." Douglass, Life and Times, 308; NS, 2 February 1849: Robin W. Winks. The Blacks in Canada: A History (New Haven, 1971), 206-08, 227, 265 - 66, 361, 395: Quarles. Black Abolitionists, 79, 98, 133, 138, 210. 7.33/xviii.7 Garnett] Born a slave in Kent County, Maryland, Henry Highland Garnet ( 1815- 82) fled north with his parents in 1824. He attended the African Free School in New York City; the Noyes Academy in Canaan , New Hampshire; and the Oneida Institute in Whitesboro, New York. Garnet was one of the founders of the American and Foreign Anti-Slavery Society and a stump speaker for the Liberty party. Licensed to preach by the Presbytery of Troy in 1842, Garnet went to Jamaica in I 852 as a missionary of the United Presbyterian Church of Scotland. An early proponent of black emigration to Africa and founder of the African Civilization Society. Garnet also sanctioned slave uprisings in an address before a National Negro Convention in Buffalo, New York, in August 1843. After the Civil War, Garnet was president of Avery College in Pittsburgh and United States minister to Liberia (1881 - 82 ). Joel Schor, Henn Highland Carnet: A Voice of Black Radical -ism in the Nineteenth Century ( Westport, Conn., 1977 ); Dorothy Sterling, ed., Speak Out in Thunder Tones: Letters and Other Writings by Black Northerners, 1787- 1865 (Garden City, N .Y., 1973 ), 376; Quarles, Black Abolitionists, 68 , 185. 216-17, 226 - 27. 7.33/xviii.7 Wells Brown] William Wells Brown (c. 1816-84) was born a slave in Lexington, Kentucky, but spent much of his youth near St. Louis, Missouri. He fled slavery in 1834, taking the name Wells Brown from a Quaker man who aided his escape. Brown was employed as a lecturer for the Western New York and Massachusetts Anti-Slavery Societies from 1843 to 1849, and was active in universal reform movements advocating temperance, women's rights, and prison reform. Brown studied medicine informally, but chose to remain active in reforms instead of committing to professional medical practice. He published a number of historical books concerning blacks and slavery, beginning in 1847 with his autobiography, Narrative of William W. Brown, A Fugitive Slave. His first history, The Black Man, His Antecendents, His Genius, and His Achievements, appeared in 1863 and ran through ten editions in three years. His best-known literary production was the novel Clotel, written while Brown was touring Great Britain in the early 1850s. R.J.M. Blackett, Beating against the Barriers: The Lives of Six Nineteenth-Century African Americans (Ithaca, N.Y., 1986), 45, 48, 95-96, 101-02: Pease and Pease, They Who Would Be Free, 35, 42, 50 - 51; DAB, 3: 161. 7.33/xviii.7 Pennington] James William Charles Pennington (1809-71) was born a slave on the Eastern Shore of Maryland and trained as a blacksmith. His flight north at the age of twenty-one led him to the home of a Pennsylvania Quaker who taught him to read and write. Later Pennington began teaching black children

Last edit about 1 year ago by csillarichmond 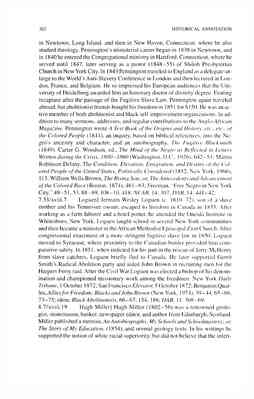 in Newtown, Long Island. and then in New Haven, Connecticut, where he also studied theology. Pennington's ministerial career began in 1838 in Newtown, and in 1840 he entered the Congregational ministry in Hartford, Connecticut, where he served until 1847, later serving as a pastor (1848-55) of Shiloh Presbyterian Church in New York City. In 1843 Pennington traveled to England as a delegate-at-large to the World's Anti-Slavery Conference in London and then lectured in London, France, and Belgium. He so impressed his European audiences that the University of Heidelberg awarded him an honorary doctor of divinity degree. Fearing recapture after the passage of the Fugitive Slave Law, Pennington again traveled abroad, but abolitionist friends bought his freedom in 1851 for $150. He was an active member of both abolitionist and black self-improvement organizations. In addition to many sermons, addresses, and regular contributions to the Anglo-African Magazine, Pennington wrote A Text Book of the Origins and History, etc., etc., of the Colored People (1841), an inquiry, based on biblical references, into the Negro's ancestry and character; and an autobiography, The Fugitive Blacksmith (1849). Carter G. Woodson, ed., The Mind of the Negro as Reflected in Letters Written during the Crisis, 1800-1860 (Washington, D.C., 1926), 642-51: Martin Robinson Delany, The Condition, Elevation, Emigration, and Destiny of the Colored People of the United States, Politically Considered (1852: New York, 1968), 113: William Wells Brown, The Rising Son; or, The Antecedents and Advancement of the Colored Race (Boston, 1874), 461-63; Freeman, "Free Negro in New York City," 49-51, 53, 88-89, 108-10, 418; NCAB, 14: 307; DAB, 14: 441-42. 7.33/xviii.7 Loguen] Jermain Wesley Loguen (c. 1810-72). son of a slave mother and his Tennessee owner, escaped to freedom in Canada in 1835. After working as a farm laborer and a hotel porter, he attended the Oneida Institute in Whitesboro, New York. Loguen taught school in several New York communities and then became a minister in the African Methodist Episcopal Zion Church. After congressional enactment of a more stringent fugitive slave law in 1850. Loguen moved to Syracuse, where proximity to the Canadian border provided him comparative safety. In 1851, when indicted for his part in the rescue of Jerry McHenry from slave catchers, Loguen briefly fled to Canada. He later supported Gerrit Smith's Radical Abolition party and aided John Brown in recruiting men for the Harpers Ferry raid. After the Civil War Loguen was elected a bishop of his denomination and championed missionary work among the freedmen. New York Daily Tribune, 1 October 1872; San Francisco Elevator, 5 October 1872; Benjamin Quarles, Allies for Freedom: Blacks and John Brown (New York, 1974), 39-44, 65-66, 73-75; idem, Black Abolitionists, 66-67, 154, 188; DAB, 11: 368- 69. 8.7/xviii.19 Hugh Miller] Hugh Miller (1802 - 56) was a renowned geologist, stonemason, banker, newspaper editor, and author from Edinburgh, Scotland. Miller published a memoir, An Autobiography, My Schools and Schoolmasters; or, The Story of My Education, (1854), and several geology texts. In his writings he supported the notion of white racial superiority, but did not believe that the inferi- 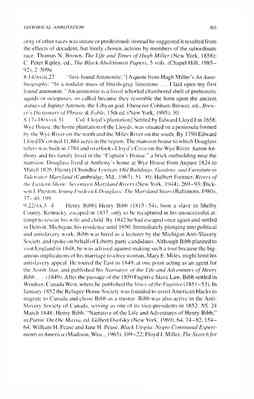 ority of other races was innate or predestined; instead he suggested it resulted from the effects of decadent, but freely chosen, actions by members of the subordinate race. Thomas N. Brown, The Life and Times of Hugh Miller (New York, 1858); C. Peter Ripley, ed., The Black Abolitionist Papers, 5 vols. (Chapel Hill, 198592), 2: 509n. 8.14/xviii.27 "first-found Ammonite,"] A quote from Hugh Miller's An Autobiography: "In a nodular mass of bluish-gray limestone . . . I laid open my first found ammonite." An ammonite is a fossil whorled chambered shell of prehistoric squids or octopuses, so called because they resemble the horn upon the ancient statues of Jupiter Ammon, the Libyan god. Ebenezer Cobham Brewer, ed ., Brewer's Dictionary of Phrase & Fable, 15th ed. (New York, 1995), 30. 8.17-18/xviii.31 Col. Lloyd's plantation] Settled by Edward Lloyd I in 1658, Wye House, the home plantation of the Lloyds, was situated on a peninsula formed by the Wye River on the north and the Miles River on the south. By 1790 Edward Lloyd IV owned 11,884 acres in the region. The mansion house to which Douglass refers was built in 1784 and overlooks Lloyd's Cove on the Wye River. Aaron Anthony and his family lived in the "Captain's House," a brick outbuilding near the mansion. Douglass lived at Anthony's home at Wye House from August 1824 to March 1826. H[enry] Chandlee Forman, Old Buildings, Gardens, and Furniture in Tidewater Maryland (Cambridge, Md., 1967), 51-80; Hulbert Footner, Rivers of the Eastern Shore: Seventeen Maryland Rivers (New York, 1944), 269 - 93; Dickson J. Preston, Young Frederick Douglass: The Maryland Years (Baltimore, 1980), 37-40, 199. 9.22/xx.3-4 Henry BibbJ Henry Bibb (1815-54), born a slave in Shelby County, Kentucky, escaped in 1837, only to be recaptured in his unsuccessful attempt to rescue his wife and child. By 1842 he had escaped once again and settled in Detroit, Michigan, his residence until 1850. Immediately plunging into political and antislavery work, Bibb was hired as a lecturer by the Michigan Anti-Slavery Society and spoke on behalf of Liberty party candidates. Although Bibb planned to visit England in 1848, he was advised against making such a tour because the bigamous implications of his marriage to a free woman, Mary E. Miles, might limit his antislavery appeal. He toured the East in 1849, at one point acting as an agent for the North Star, and published his Narrative of the Life and Adventures of Henry Bibb . . . (1849). After the passage of the 1850 Fugitive Slave Law, Bibb settled in Windsor, Canada West, where he published the Voice of the Fugitive (1851-53). In January 1852 the Refugee Home Society was founded to assist American blacks to migrate to Canada and chose Bibb as a trustee. Bibb was also active in the AntiSlavery Society of Canada, serving as one of its vice-presidents in 1852. NS, 24 March 1848; Henry Bibb. "Narrative of the Life and Adventures of Henry Bibb,'' in Puttin' On Ole Massa, ed. Gilbert Osofsky (New York, 1969), 64, 74-82, 15464; William H. Pease and Jane H. Pease, Black Utopia: Negro Communal Experiments in America (Madison, Wisc., 1963), 109-22; Floyd J. Miller, The Search for