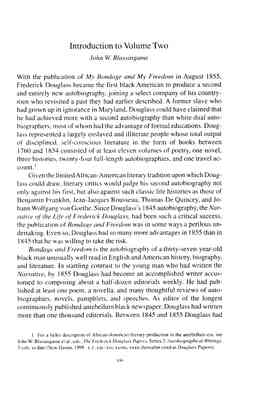 With the publication of My Bondage and My Freedom in August 1855, Frederick Douglass became the first black American to produce a second and entirely new autobiography, joining a select company of his countrymen who revisited a past they had earlier described. A former slave who had grown up in ignorance in Maryland, Douglass could have claimed that he had achieved more with a second autobiography than white dual autobiographers, most of whom had the advantage of formal educations. Douglass represented a largely enslaved and illiterate people whose total output of disciplined, self-conscious literature in the form of books between 1760 and 1854 consisted of at least eleven volumes of poetry, one novel, three histories, twenty-four full-length autobiographies, and one travel account.1

Given the limited African-American literary tradition upon which Douglass could draw, literary critics would judge his second autobiography not only against his first, but also against such classic life histories as those of Benjamin Franklin, Jean-Jacques Rousseau, Thomas De Quincey, and Johann Wolfgang von Goethe. Since Douglass's 1845 autobiography, the Narrative of the Life of Frederick Douglass, had been such a critical success, the publication of Bondage and Freedom was in some ways a perilous undertaking. Even so, Douglass had so many more advantages in 1855 than in 1845 that he was willing to take the risk.

Bondage and Freedom is the autobiography of a thirty-seven-year-old black man unusually well read in English and American history, biography, and literature. In startling contrast to the young man who had written the Narrative, by 1855 Douglass had become an accomplished writer accustomed to composing about a half-dozen editorials weekly. He had published at least one poem, a novella, and many thoughtful reviews of autobiographies, novels, pamphlets, and speeches. As editor of the longest continuously published antebellum black newspaper, Douglass had written more than one thousand editorials. Between 1845 and 1855 Douglass had 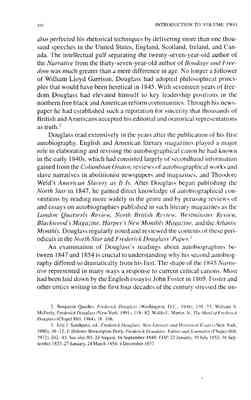 also perfected his rhetorical techniques by delivering more than one thousand speeches in the United States, England, Scotland, Ireland, and Canada. The intellectual gulf separating the twenty-seven-year-old author of the Narrative from the thirty-seven-year-old author of Bondage and Freedom was much greater than a mere difference in age. No longer a follower of William Lloyd Garrison, Douglass had adopted philosophical principles that would have been heretical in 1845. With seventeen years of freedom Douglass had elevated himself to key leadership positions in the northern free black and American reform communities. Through his newspaper he had established such a reputation for sincerity that thousands of British and Americans accepted his editorial and oratorical representations as truth.2

Douglass read extensively in the years after the publication of his first autobiography. English and American literary magazines played a major role in elaborating and revising the autobiographical canon he had known in the early 1840s, which had consisted largely of secondhand information gained from the Columbian Orator, reviews of autobiographical works and slave narratives in abolitionist newspapers and magazines, and Theodore Weld’s American Slavery as It Is. After Douglass began publishing the North Star in 1847, he gained direct knowledge of autobiographical conventions by reading more widely in the genre and by perusing reviews of and essays on autobiographies published in such literary magazines as the London Quarterly Review, North British Review, Westminster Review, Blackwood's Magazine, Harper's New Monthly Magazine, and the Atlantic Monthly. Douglass regularly noted and reviewed the contents of these periodicals in the North Star and Frederick Douglass' Paper.3

An examination of Douglass’s readings about autobiographies between 1847 and 1854 is crucial to understanding why his second autobiography differed so dramatically from his first. The shape of the 1845 Narrative represented in many ways a response to current critical canons. Most had been laid down by the English essayist John Foster in 1805. Foster and other critics writing in the first four decades of the century stressed the im- 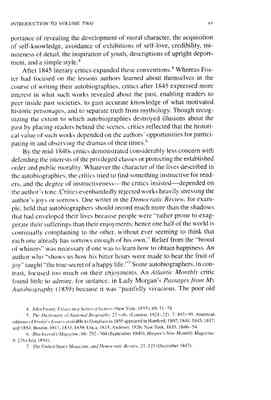 portance of revealing the development of moral character, the acquisition of self-knowledge, avoidance of exhibitions of self-love, credibility, minuteness of detail, the inspiration of youth, descriptions of upright deportment, and a simple style.4

After 1845 literary critics expanded these conventions.5 Whereas Foster had focused on the lessons authors learned about themselves in the course of writing their autobiographies, critics after 1845 expressed more interest in what such works revealed about the past, enabling readers to peer inside past societies, to gain accurate knowledge of what motivated historic personages, and to separate truth from mythology. Though recognizing the extent to which autobiographies destroyed illusions about the past by placing readers behind the scenes, critics reflected that the historical value of such works depended on the authors’ opportunities for participating in and observing the dramas of their times.6

By the mid-1840s critics demonstrated considerably less concern with defending the interests of the privileged classes or protecting the established order and public morality. Whatever the character of the lives described in the autobiographies, the critics tried to find something instructive for readers, and the degree of instructiveness—the critics insisted—depended on the author's tone. Critics evenhandedly rejected works heavily stressing the author's joys or sorrows. One writer in the Democratic Review, for example, held that autobiographers should record much more than the shadows that had enveloped their lives because people were “rather prone to exaggerate their sufferings than their enjoyments; hence one half of the world is continually complaining to the other, without ever seeming to think that each one already has sorrows enough of his own.” Relief from the “brood of whiners" was necessary if one was to learn how to obtain happiness. An author who “shows us how his bitter hours were made to bear the fruit of joy" taught “the true secret of a happy life."7 Some autobiographers, in contrast, focused too much on their enjoyments. An Atlantic Monthly critic found little to admire, for instance, in Lady Morgan's Passages from My Autobiography (1859) because it was "painfully vivacious. The poor old 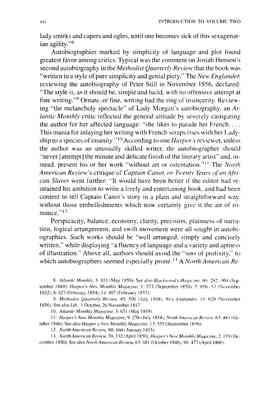 lady smirks and capers and ogles, until one becomes sick of this sexagenarian agility.”8

Autobiographies marked by simplicity of language and plot found greatest favor among critics. Typical was the comment on Josiah Henson’s second autobiography in the Methodist Quarterly Review that the book was “written in a style of pure simplicity and genial piety.” The New Englander, reviewing the autobiography of Peter Still in November 1856, declared: “The style is, as it should be, simple and lucid, with no offensive attempt at fine writing.”9 Ornate, or fine, writing had the ring of insincerity. Reviewing “the melancholy spectacle” of Lady Morgan’s autobiography, an Atlantic Monthly critic reflected the general attitude by severely castigating the author for her affected language: “she likes to parade her French... This mania for inlaying her writing with French scraps rises with her Ladyship to a species of insanity.”10According to one Harper's reviewer, unless the author was an unusually skilled writer, the autobiographer should “never [attempt] the minute and delicate finish of the literary artist” and, instead, present his or her work “without art or ostentation.”11 The North American Review's critique of Captain Canot, or Twenty Years of an African Slaver went further: “It would have been better if the editor had restrained his ambition to write a lively and entertaining book, and had been content to tell Captain Canot’s story in a plain and straightforward way, without those embellishments which now certainly give it the air of romance.”12

Perspicacity, balance, economy, clarity, precision, plainness of narration, logical arrangement, and swift movement were all sought in autobiographies. Such works should be “well arranged, simply and concisely written,” while displaying “a fluency of language and a variety and aptness of illustration.” Above all, authors should avoid the “sins of prolixity,” to which autobiographers seemed especially prone.13 A North American Re- 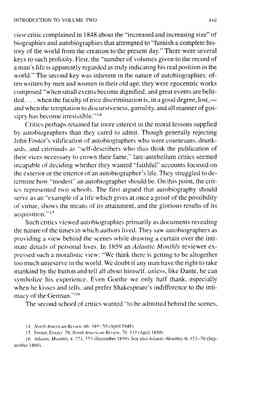 view critic complained in 1848 about the “increased and increasing size” of biographies and autobiographies that attempted to “furnish a complete history of the world from the creation to the present day.” There were several keys to such prolixity. First, the “number of volumes given to the record of a man’s life is apparently regarded as truly indicating his real position in the world.” The second key was inherent in the nature of autobiographies: often written by men and women in their old age, they were egocentric works composed “when small events become dignified, and great events are belittled, . . . when the faculty of nice discrimination is, in a good degree, lost,— and when the temptation to discursiveness, garrulity, and all manner of gossipry has become irresistible.”14

Critics perhaps retained far more interest in the moral lessons supplied by autobiographers than they cared to admit. Though generally rejecting John Foster’s vilification of autobiographers who were courtesans, drunkards, and criminals as “self-describers who thus think the publication of their vices necessary to crown their fame,” late-antebellum critics seemed incapable of deciding whether they wanted “faithful” accounts focused on the exterior or the interior of an autobiographer’s life. They struggled to determine how “modest” an autobiographer should be. On this point, the critics represented two schools. The first argued that autobiography should serve as an “example of a life which gives at once a proof of the possibility of virtue, shows the means of its attainment, and the glorious results of its acquisition.”15

Such critics viewed autobiographies primarily as documents revealing the nature of the times in which authors lived. They saw autobiographers as providing a view behind the scenes while drawing a curtain over the intimate details of personal lives. In 1859 an Atlantic Monthly reviewer expressed such a moralistic view: “We think there is getting to be altogether too much unreserve in the world. We doubt if any man have the right to take mankind by the button and tell all about himself, unless, like Dante, he can symbolize his experience. Even Goethe we only half thank, especially when he kisses and tells, and prefer Shakespeare’s indifference to the intimacy of the German.”16

The second school of critics wanted “to be admitted behind the scenes,