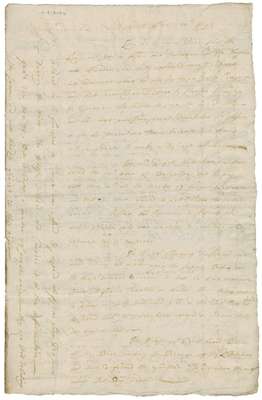 They write from Paris that the King will goe in person into Germany and the Dauphin into fflanders, and hath expedited Monsieur Cabinatt into Piedmont wher he will begin an Early Campaign and hath sent Count D'Estree to Thoulon to hasten the [Porvince] Squadron to ioyn the Grand ffleet and had been amassing great Quantities of provisions in all his Maritime Towns to entertain fforces which he pretends to make a descent withall

The Lord [Rugell] hath sent a Letter dated the 14th xber at [Betyr.de] that he was received there with all the markes of honour & esteem and that he then found a Letter from the Grand vizeir to hasten his Comming to Adrianople whose presence only was wanting to conclude a Peace betwixt the 2 Empires

The House: of Commons yesterday conti= =nued sitting till night upon the supply Bill, and the House divided & carried it that the King nominate Commissioners for 2 Counties in Wales, there being but 3 persons in both that had paid in the [Poll] Tax as Gentlemen: Resolved that the Universities excused in former Acts doe pay in this -

believed to be finished a clause was offerd to suspend all persons from Pensions During the Warr. The House Divided and Carried it in the Affirmativeyeas 107 noes 70. But it being a matter of great weight they are still debating the same, and will hardly finish it this night 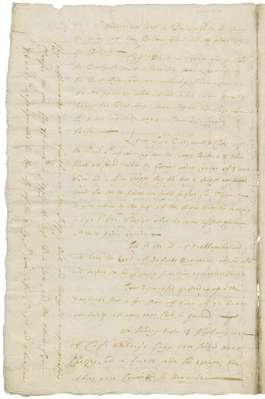 Captain Bloud in Custody for robbing the Portsmouth Mail is directly sworn against by the Post Boy, and an unlucky Circumstance stands against him, that being in an [gun] & seeing the Post boy there tooke his horse from his Oates, and rode away without discharging the house -

Letters from Portsmouth & Cowes of the 7th and 8th instant say that the Canary, Bilboa & W India ffleets are sailed thence the former under Convoy of 3 men of Warr and a ffire shippe They add that 2 shipps bound for the W Indies are sailed before for Plymouth to give notice to the rest of the shipps there to be ready to ioyn Sir ffrancis: Wheeler when he comes by that place with the W India Squadron

Twas discoursed yesterday upon the Exchange that a ffrench: Man of Warr of 72 Gunns was lately cast away near Cork in Ireland -

On sunday last 3 High way men of Captain: Whitney's Gang were seized near Chelsey, and a fourth made his escape, the others were Committed to Newgate

They afterwards went further on the Supply Bill and brought 2 appropriating Clauses the one for 750000li to supply the last Poll Tax, and the other for 700000li appropriated to the use of the Navy, with some letter Clauses and when twas 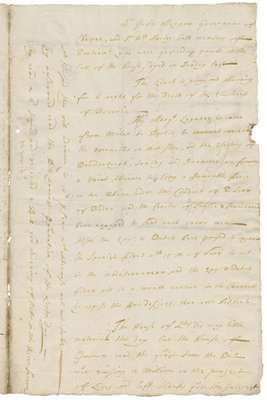 Sir Iohn Morgan Governour of Chester, and Sir William Morley both members of Parliament who was yesterday 7 night at the Call of the house, dyed in Sunday last

The Marquess Legunez is come from Milan to Berlin to concert the Operacions in that side, and the Electors of Brandenburgh, Saxony and Hannover are forming a strict Alliance to bring a fformidable fforce on the Rhine under the Conduct of R Lewis of Baden, And the Circles of Sualia & ffrancconia have engaged to send each 12000 men

Alsoe the English: & Dutch have promised to augment the Spanish ffleet with 15 Men of Warr to act -in the Mediterrranean, and the English & Dutch ffleet will be a month earlier in the Channell to oppose the ffrench: designes, than ever hitherto 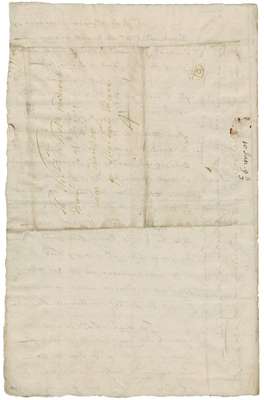 To The Honorable Sir Richard: Newdigate Baronet at Arbury near Coventree per Litchfeild Bagg 4