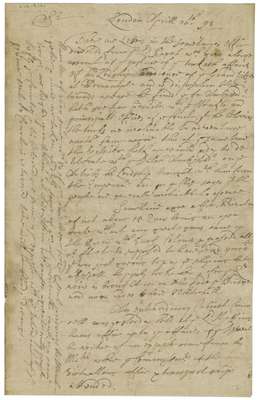 There are Letters in the secretaryes Office directed from Lord Paget which give alarge account of posture of turkish affairs Of his Lordships audience of Grand Vissier at Adrianople and what disposition there is towards apeace. he finds french Ambassadors hath soe far prevailed with Mufti and principall Offices of Court, he beleives the turks are inclinable to adventure another Campaigne, though at same time the Vissier hath appointed aday to de liberate with Dutch Ambassador on Artistes his Lordship brought with him from the Emperour and in Close sayes the people are generally inclinable to apeace.

Sometime agoe a ffrench. Privateer of not aboue 15 Tuns being an open boate without any greate guns came up the River with English Colours & passed all our fleet 'tis supposed to haue seized 40000l was iust goeing to pay shiping but aVessell happily tooke her & for Queens veiw is brought up on this side Bridge and now rides before Whitehall.

An exraordinary Cabinet Coun -cell was yesterday held at Lord Notting -hams office upon affaires of Descent by vertue of an express come from his Maiestie where Commissioners of the Victualling office & transport ships attended.

Number of 2600 since which 80 of them have been seized & sent prisoners to Montpelier & more are taken up dayly some of them of Considerable ranke & some troops are lodged upon them at Discression which causes agreate many people to fly Countrey & tis beleived soe soone as expresse which Intendant of Province sent to Court is returned there will be bloody doeings. 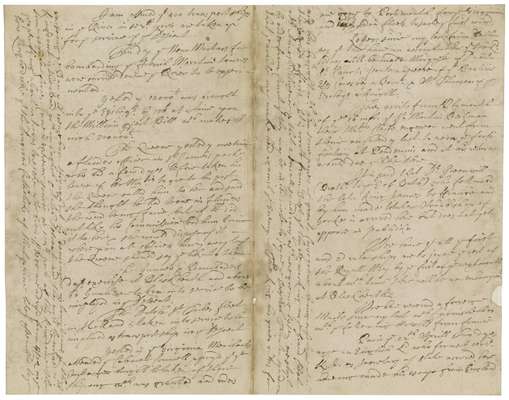 I am assured 500 transport ships in River in sevll. ports are taken up for service of Descent

The Queene yesterday meeting a flanders officer in St. James's parke who had a few dayes before taken his leave of her Ma to goe to his post the Queene called him to her and said she thought he had beene in Flanders the wind being faire, but if he did not like his Commission bid him bring it to her & she would dispose of it - where upon all officers hurry away least the Queene should say like to them

The Gunners & Bombarders dayly exercise at Black heath and above 60 Gunners. are taken into service to be imployed in Descent.

raiseing a Ban and A near Ban throughout his dominions intimateing the Kingdom is threatened with an English & Dutch Descent and they will be mixed withSir some regular forces. Corne is extereame scarce in severall parts of this Kingdom the people flying about in troops to seek after bread. Wee are advisid from [Hsez] in low Languedocke the Dragoons Catholicks of that Province likely assembled to

are gone to Portsmouth for virginia and ^west India fleets to saile first wind.

Letters since my last from Dublin say they haue an account there the Lord Sidney will be made Marquesce of Dublin Sir Charles Porter apeere of Realme Esquire Coresbey a Barronet & Mr Thomson of Exchequer a Knight.

They write from Plymouth of 16 inst. Sir Martin Beckman their Maiesties Cheife engeneer went from thence on saterday last to veiw forti -fications at Pendernis and at his returne would doe like there.

It is said that Dr Greenvill (Brother to Earl of Bath) who followed the late King Iames to ffrance and by him made titular Archbishop of Yorke is arrived here but does not yet appeare in publicke.

Wee heare all first and 2d rate ships are to ioyne rest of the Royall Navy by first of next month about which time there will be an encampment at Black heath.

and has brought with him some papers of greate Consequence being [..sclene] of all the English affairs - It is wrote from Brest they are working on Grand fleet with utmost diligence & that 2 small squadrons which were goeing to sea are stopt by order from Court they may be in readinesse to ioyne Thoulon squadron that while may make head against Enemy. - The King has given orders for 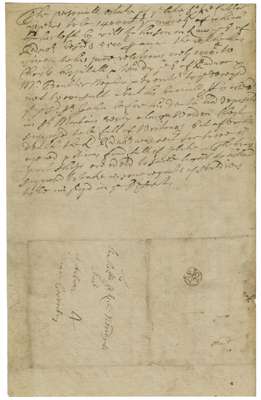 The personall estate of late Sir Ino Cutler appears to be 140000l moiety of which he has left by will to his son in Law Earl of Radnor. besides 5500l per annum the rest he has given to his poore relations onely 1000l. to Christs hospitall & this day Earl of Radnor & Mr. Boulter Nephew & executor to deceased met to consult about his buriall. It is observd said Sir John before his death had deposited in St. Martins vestry alarge Wooden Chest supposed to be full of Writings but after his death the Lord Radnor was sent for to see it opened & it was found full of plate - The Trans -port ships are orderd to saile light to holland supposed to take in some regiments of souldiers to be imployed in Descent.

To the honorable Sir Richard: Newdigate Baronet at Arbury 4 near Coventry