Correspondence from Albert Ruth to Mary Daggett Lake: May 8, 1926 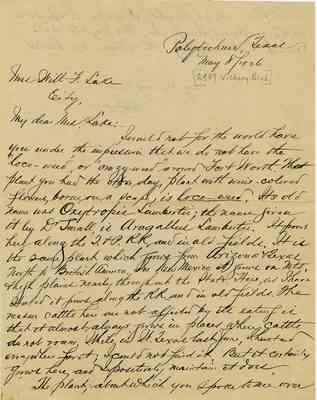 I would not for the world have you under the impression that we do not have "loco-weed", or "crazy-weed" around Fort Worth. That plant you had the other day, plant with wine-colored flowers, borne on a scape, is loco-weed. Its old name was Oxytropis Lambertii; the name given it by Dr Small, is Aragallus Lambertii. It forms here along the T. & P. RR and in old fields. It is the same plant which grows from Arizona & Texas North to British America. In New Mexico it grows on Mts, & high plains nearly through out the State. Here, as I have stated it grows along the RR. and in old fields. The reason cattle here are not affected by its eating is that it almost always grows in places, where cattle do not roam. While in [?N?] Texas last June, I hunted everywhere for it; I could not find it. But it certainly grows here, and I positively maintain it does.

The plant, about which you spoke to me over 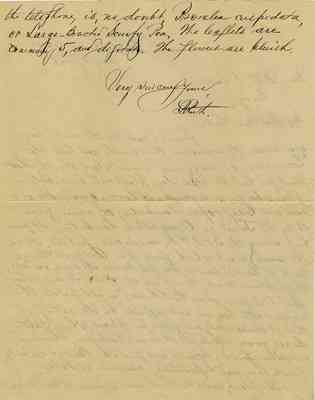 the telephone, is, no doubt, Psoralea cuspidata, or Large-Bracted Scurfy Pea, The leaflets are [commonly?] 5, and digitate. The flowers are bluish.

Very sincerely yours, A Ruth.

Last edit 4 days ago by Fort Worth Public Library 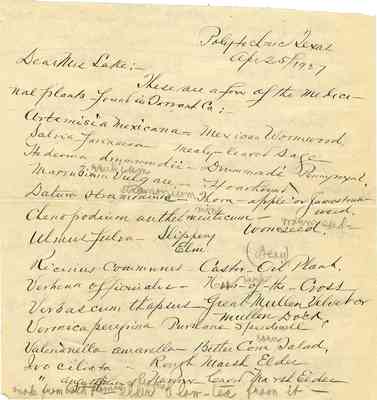 These are a few of the medicinal plants found in Tarrant Co. :-

Last edit 4 days ago by Fort Worth Public Library 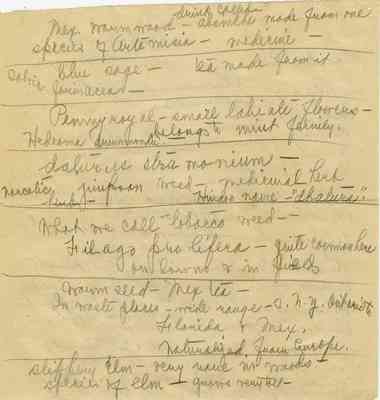 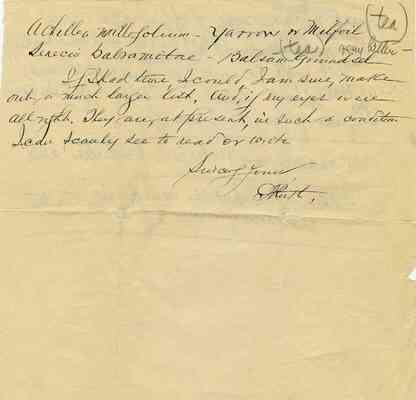 If I had time, I could I am sure, make out a much larger list, And, if my eyes were all right, They are, at present, in such a condition I can scarcely see to read or write

Sincerely Yours, A Ruth,

Last edit 2 months ago by Jannyp
← Previous 1 2 Next →
Displaying Page 1 - 5 of 8 in total
This is a project by Fort Worth Public Library Archives. Contact us by phone at (817) 392-7740 or send us an email to genlhst@fortworthtexas.gov