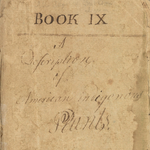 The collection from the Botany Libraries, Archives of the Gray Herbarium, includes

Colonial North America at Harvard Library provides access to remarkable and wide-ranging materials digitized as part of an ongoing, multi-year project. When complete, the project will make available to the world approximately 650,000 digitized pages of all known archival and manuscript materials in the Harvard Library that relate to 17th- and 18th-century North America. Each item is connected to countless stories—of lives lived quietly and extravagantly, of encounters peaceful and volatile, and of places near and far – providing an opportunity to travel back in time, to rethink familiar stories, and to discover new ones.

Contains an undated broadside regarding the formation of the Literary and Philosophical Society of South Carolina in 1814; undated fragments and lists of books, medical texts, scientists, authors, and political figures; and lists of books and invoices, including an undated manuscript list of...

Correspondence in French from botanist André Thouin (1746-1824), chair of horticulture at Muséum national d'histoire naturelle in Paris, to Elliott, dated July 5, 1818, regarding the exchange of plant specimens.

Correspondence from German entomologist and ornithologist Friedrich Boie (1789-1870) to Elliott in German, dated September 28, 1818. Included is a contemporary manuscript translation of the letter, which mentions Boie’s Scandinavian travels to research birds, his interest in receiving American...

Correspondence in German from W.C. Stueve in Philadelphia, Pennsylvania, to Elliott, dated October 20, 1817, accompanied by a list of European plant names.

Unaddressed correspondence in French from a Madame Tesse regarding the procurement and shipment of seeds from France, possibly on behalf of Stephen Elliott.

Correspondence from Lancaster, Pennsylvania, botanist Henry Muhlenberg (1753-1815), dated from 1808 to March 30, 1810, concerning the classification and exchange of plant specimens with Elliott and other botanists, including John Lyon (1765-1814), Muhlenberg’s observations on different plant...

Correspondence from physician and botanist James MacBride (1784-1817) of Princeville and Charleston, South Carolina, to Elliott, dated from October 7, 1812 to March 8, 1814. Topics include medicinal plants, including Vernonia angustifolia, which MacBride claims has cured syphilis in slaves;...

Correspondence from physician and botanist James MacBride (1784-1817) of Princeville and Charleston, South Carolina, to Elliott, dated April 4, 1814 to 1817, and undated. Topics include classification, collection, and exchange of plant specimens and a voyage with his family to the mountains,...

Contains notes on Linnaean classes of plants, including Hexandria and Tetradynamia, and plant specimens; a manuscript, possibly by botanist James MacBride (1784-1817), describing plants local to swamps, pine barrens, sand hills, and other ecoregions; lists of Linnaean names of fishes and...

Contains undated lists of plants and trees “which would thrive in the mild climate of Charleston,” South Carolina, including cork trees, fig trees from Italy, and lemon and lime trees from Portugal; lists of genera and species under Linnaean classes of plants including Syngenesia, Dodecandria,...

1 day agoRSubber wrote Thanks for the correction, crobson. I removed the brackets.
5 days agocrobson wrote Thanks for your input--it got me to rethink the translation. I checked some old French dictionari...
9 days agoRSubber wrote In the signature block, could it be "Mes Salutations tres amicables" ?
6 months agoDreJoe wrote The rest of the transcript's not ledgeable to transcribe. A.S.
6 months agoJudy Warnement wrote Please note that numbered pages are not considered blank.
6 months agoAnn wrote What a pleasure to transcribe - and learn the names of plants that I may even be familiar with ou...
8 months agoGuest User wrote ? Page layout
9 months agoDiane Rielinger wrote This page is complete
9 months agosuemudd wrote Line 3 - Impatiens Noli-tang (ere) Have transcribed "ye" as in the original, for (th)e. S...
10 months agodcastronovo wrote This is a two page note.
Show More