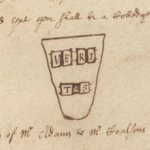 Colonial North America at Harvard Library provides access to remarkable and wide-ranging materials digitized as part of an ongoing, multi-year project. When complete, the project will make available to the world approximately 650,000 digitized pages of all known archival and manuscript materials in the Harvard Library that relate to 17th- and 18th-century North America. Each item is connected to countless stories—of lives lived quietly and extravagantly, of encounters peaceful and volatile, and of places near and far – providing an opportunity to travel back in time, to rethink familiar stories, and to discover new ones.

Discover 400 years of intellectual pursuits, discoveries, culture, social life, and work of the Harvard community, on campus and beyond. A national treasure, the Harvard University Archives welcomes students, faculty, and staff and researchers from across the globe.

Daniel Bates wrote these five letters to his friend and classmate, William Jenks, between May 1795 and September 1798. In a letter written May 12, 1795, Bates informs Jenks, who was then employed as an usher at Mr. Webb's school, of his studies of Euclid, the meeting of several undergraduate...

One leaf containing a page of handwritten biographical notes on Revolutionary War hero General John Stark in Bentley's hand. The note is written on the verso of a short letter from J. Pitcairn regarding a deliver for the "Rev. D. Bently" dated March 2, 1810. The notes were likely copied from the...

Two octavo-sized leaves containing a two-page handwritten letter from Winthrop to Bentley discussing the "trials of the Regicides" during the reign of King Charles II.

One octavo-sized leaf containing a one-page handwritten letter from Winthrop to Bentley referencing "business" that Winthrop entered his "written protest" of, and the upcoming ordination of Timothy Hilliard as the new minister of Cambridge, Mass.

One folio-sized leaf containing a two-page handwritten letter from Winthrop to Bentley discussing the case of "Capt. H." whose ship was "legally condemned by the French Court.

Two folio-sized leaves containing a two-and-a-half-page handwritten letter from Winthrop to Bentley with a lengthy discussion on a recent comet and related calculations.

17 days agoHarvard Library wrote Test note
19 days agoCary Saunders wrote This part of the page is the verso of the page the preceding text is on; the page has been folded...
about 2 months agoBundtpapier wrote how are you wanting folks to handle double page spreads like this?
4 months agoJennifer Pelose wrote Mentions credit to Susanna Morse, laundress
4 months agoJennifer Pelose wrote Mentions Susanna Morse the Laundress
6 months agono credit wrote Spirits Nitre is ethyl nitrite, a traditional Euroepan cold remedy, banned as recently as 1980 in...
7 months agosgitelmanwilloughby wrote The text "vigilantissimos Curatores numeramus / scilicet" on two separate lines, in inserted abov...
7 months agosgitelmanwilloughby wrote The text "nobis praesunt, &amp;" is inserted above the line below it, where the caret (^) is indi...
7 months agoJennifer Pelose wrote Mentions Susannah Morse (1754-1815), laundress, of Cambridge, Mass.
7 months agosgitelmanwilloughby wrote "Quadet" (second to last line from the bottom) is not a Latin word. Unclear on what this word act...
Show More