DEED FROM Ewart Hedgecock TO A H Idol 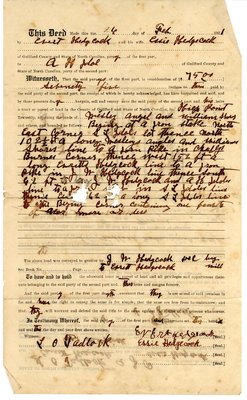 Witnesseth, That the said partys of the first part, in consideration of ($ 75,00) Seventy five Dollars to them paid by the said party of the second part, the receipt of which is hereby acknowledged, has have bargained and sold, and by these presents doth bargain, sell and convey unto the said party of the second part and his heirs a tract or parcel of land in the County of Guilford and State of North Carolina, in High Point Township, adjoining the lands of Wesley Angel and William Shorey and others, and bounded as follows: Beging at a iron stake North East Corner S L Idols lot thence north 102 1/2 ft a long Wesleys Angles and Williams Shores line to a iron pike in Charles Burnes Corner thence west 152 ft a long Evretts Hedgcock line to a iron pike in J W Hedgcock line thence south 62 ft a long J W Hedgcock and A H Idols line to a [illegible] in S L Idoles line thence [illegible] 62 [illegible] a long S L Idoles line to the Beging Corner containing one fourth of Alos more or less

The above land was conveyed to grantor by J W Hedgcock Dec by will See Book No [blank], Page to Evrett Hedgecock

To have and to hold the aforesaid tract or parcel of land and all privileges and appurtenances thereunto belonging to the said party of the second part and their heirs and assigns forever.

And the said party of the first part doeth covenant that they is are seized of said premises in fee and have the right to convey the same in fee simple; that the same are free from incumbrances; and that they will warrant and defend the said title to the same against the claims of all persons whatsoever.

In Testimony Whereof, the said party of the first part and hereunto set there hand and seal this day and year first above written. 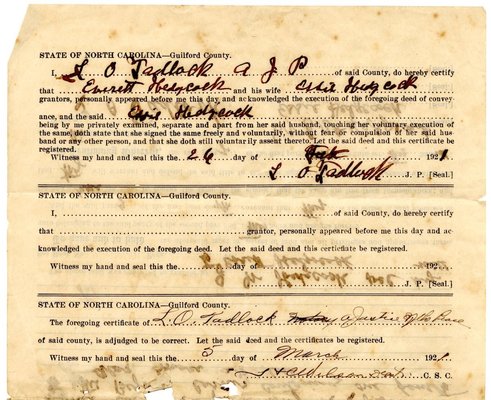 STATE OF NORTH CAROLINA -- Guilford County. I, L O Tadlock a JP of said County, do hereby certify that Everett Hedgcock and his wife Essie Hedgcock grantors, personally appeared before me this day and acknowledged the execution of the foregoing deed of conveyance, and the said Essie Hedgcock being by me privately examined, separate and apart from her said husband, touching her voluntary execution of the same, doth state that she signed the same freely and voluntarily, without fear or compulsion of her said husband or any other person, and that she doth still voluntarly assent thereto. Let the said deed and this certificate be registered. Witness my hand and seal this the 26 day of Feb 1921 L O Tadlock J.P [Seal.]

STATE OF NORTH CAROLINA--Guilford County. I, . . . . [blank]. . . . of said County, do hereby certify that . . . .[blank]. . . grantor, personally appeared before me this day and acknowleged the execution of te foregoing deed. Let the said deed and this certicfiate be registered.

STATE OF NORTH CAROLINA---Guilford County. The foregoing certificate of L.O. Tadlock a Justice of the Peace of said county, is adjusted to be correct. Let the said deed and the certificates be registered.