[Big stamp in the middle of deed "Cancelled of record R.H. WHARTON, Register of Deeds"]

Last edit 2 months ago by Kayn 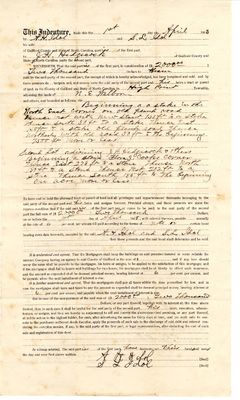 WITNESSETH, That the said parties of the first part, in consideration of [$2000.00] Five Thousand. . . Dollars to them paid by the said party of the second part, the receipt of which is hereby acknowledged, has have bargained and sold, and by these preents do. . bargain, sell, and convey unto the said party of the second part and their heirs a tract or parcel of land, in the County of Guilford and State of North Carolina, in High Point Township, adjoining the lands of N.E. Welborn and others, and bounded as follows, viz:. . . . .

To have and to hold the aforesaid tract or parcel of land and all privileges and appurtenances thereunto belonging to the said party of the second part and his heirs and assigns forever; Provided always, and these presents are upon the express condition that if the said parties of the first part pay, or cause to be paid, to the said party of the second part the full sum of [$2000.00] Two Thousand Dollars, on or before the [blank] day of April 1918, with interest thereon, pavable [blank] annually at the rate of 6 per cent. per annum till paid according to the terms of note or certain bond [blank] bearing even date herewith, executed by the said A.H. Idol and S.L. Idol [blank] then these presents and the said bond shall determine and be void.

It is understood and agreed, That the Mortgagors shall keep the building on said premises insured in some reliable insurance Company having an agency in said County of Guilford in the sum of $[blank], and if any loss should occur the same shall be payable to the mortgagee, his heirs or assigns, to be applied to the satisfaction of this mortgage; and if the mortgagor shall fail to insure said buildings for two hours, the mortgagee shall be at liberty to effect such insurance, and the amount so expended shall be deemed principal money, bearing interest at 6 per cent. per annum, and be payable when the next installment of interest is due.

It is further understood and agreed, That the mortgagors shall pay all taxes within the time prescribed by law, and in case the mortgagee shall have said taxes to pay the amount so expected shall be deemed principal money, bearing interest at 6 per cent. per annum, and payable when the nect installment of interest is due.

But in case of the non-payment of the said sum of [$2000.00] Two Thousand limited, then in such case it shall be lawful for the said party of the second part, his heirs, executors, administrators, or assigns, and they are hereby so empowered to sell and convey the above-described premises, or any part thereof, at public aution to the highest bidder, for cash, after advertising the same for thirty days at least, and on such sale to execute to the purchaser sufficient deeds therefor, apply the proceeds of such sale to the discharge of said debt and interest rendering the overplus monies, if any, to the said party of the first part, or legal representatives, after deducting the cost of such sale and registration of this deed

In witness whereof, The said parties of the first part have hereunto set ther hands and seals the day and year first above written. 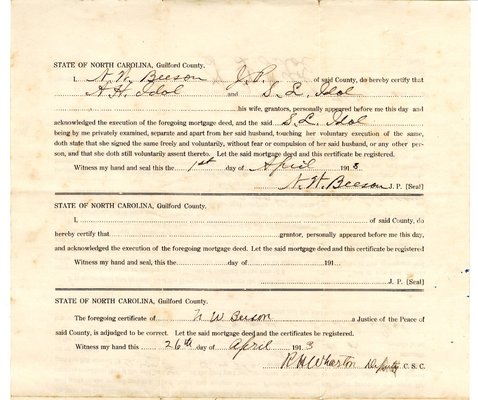 I, N. W. Beeson J. P. of said County, do hereby certify that A. H. Idol and S. L. Idol, . . . . . [blank] . . . . . his wife, grantors, personally appeared before me this day and acknowledged the execution of the foregoing mortgage deed, and the said S. L. Idol being by me privately examined, separate and apart from her said husband, touching her voluntary execution of the same, doth state that she signed the same freely and voluntarily, without fear or compulsion of her said husband or any other person, and that she doth still voluntarily assent thereto. Let the said mortgage deed and this certificate be registered.

The foregoing certificate of N W Beeson a Justice of the Peace of said County, is adjudged to be correct. Let the said mortgage deed and the certificate be registered.

When this mortage is paid in full, have the mortagee to sign it, and the note, before a Clerk of the Superior Court or Notary Public, or go mark it "Satisfied" on the Record, or execute a Release Deed. Satisfied in full, this the 24th day of april 1921 [J. H. Hedgecock] Mortagee

Subscribed before me [blank]

Last edit 2 months ago by Kayn
Displaying all 4 pages