ReadAboutContentsHelp
Completed! Click here for more information on this item. 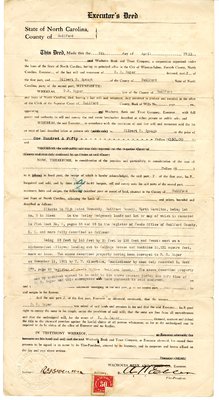 WHEREAS, D. R. Raper, late of the County of Guilford and State of North Carolina, died, leaving a last will and testament, duly admitted to probate and enrolled in the office of the Clerk of the Superior Court of Guilford County, Book of Wills No. [blank], page [blank], etc., appointing Wachovia Bank and Trust Company, Executor with full power and authority to sell and convey the real estate hereinafter described at either private or public sale; and

WHEREAS, the said Executor in accordance with the provisions of said last will and testament sold the lot or tract of land described below at private sale to Gilbert D. Spaugh at the price of One Hundred & Fifty Dollars ($150.00); and

NOW, THEREFORE, in consideration of the premises and particularly in consideration of the sum of [blank] Dollars ($[blank]) to it in hand paid, the receipt of which is hereby acknowledged, the said party of the first part, has bargained and sold, and by these presents does bargain, sell and convey unto the said party of the second part, [blank] successors, heirs and assigns, the following described piece or parcel of land, situated in the County of Guilford and State of North Carolina, adjoining the lands of [blank], and others, bounded and described as follows:

Situate in High Point Township, Guilford County, North Carolina, being lot No. 3 in Block [blank] in the Wesley Hedgecock lands and lot or map of which is recorded in Plot Book No. 4, pages 88 and 89 in the Register of Deeds Office of Guilford County, N. C. and more fully described as follows:

Being 89 feet by 143 feet by 35 feet by 138 feet and fronts east on a sixteen-foot alleyway leading out to College Avenue and contains 10,231 square feet, more or less. The above described property having been conveyed to D. R. Raper on November 11, 1921 by T. W. Albertson, Commissioner by deed duly recorded in Book 377, page 69 Register of Deeds Office Guilford County. The above described property was by contract agreed to be sold to the above grantee during the life time of D. R. Raper and this conveyance is made pursuant to said contract.

And the said party of the first part, Executor as aforsaid, covenants that the testator, D. R. Raper, was seized of said lands and premises in fee and that the said Executor has good right to convey the same in fee simple, under the provisions of said will; that the same are free from all encumbrances and that the undersigned will, for the estate of D. R. Raper, deceased, warrant and defend the title to the aforesaid premises against the lawful claims of all persons whatsoever, so far as the undersigned may be required to do by virtue of the office of Executor and no further.

IN TESTIMONY WHEREOF, Wachovia Bank and Trust Company, as Executor aforesaid, has caused these presents to be signed in its name by its Vice-President, attested by its Secretary, and its corporate seal hereto affixed on the day and year above written.