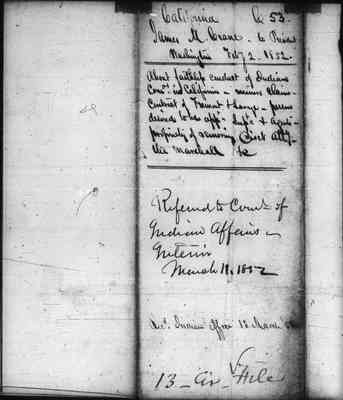 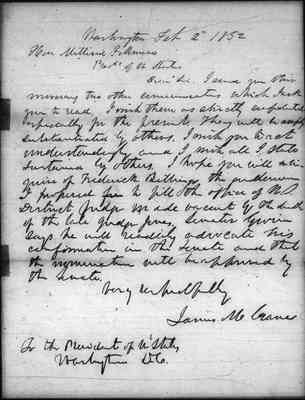 Hon. Millard Fillmore Presdt of the U States

Dear Sir. I send you this morning two other communications which I ask you to read. I wish them as strictly confidential especially for the present. They will be amply substantiated by others. I wish you to act understandingly and I wish all I state sustained by others. I hope you will inquire of Frederick Bettings the gentleman I prepared to fill the office of U.S. District Judge made vacant by the death of the late Judge Jones. Senator Gwin says he will readily advocate his confirmation in the Senate and that the nomination will be approved by the Senate.

To the President of the U States Washington D.C. 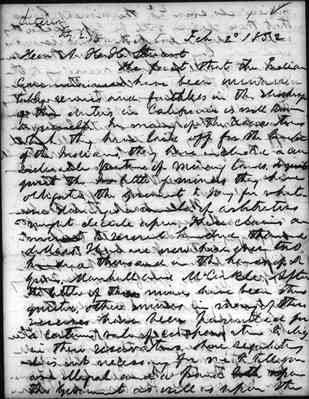 The fact that the Indian Commissioners have been unwarrentably remiss and faithless in the discharge of their duties in California is well known to yourself. In many of the reservations which they have laid off for the benefit of the Indians, they have included a considerable portion of mining lands. To quiet the rattle of miners they have obligated the Government to pay for whatever damages a number of arbitraters might decide upon. These claims amount to several hundred thousand dollars. There are now how ever two hundred thousand in the hands of Dr Gwin, Manhall and McCorkle. After the rattle of these miners have been thus quieted, other miners in many of these reserves have been permitted for a certain rate of compensation to dig in these reservations. More regulations is not necessary for me to tell you an illegal and a fraud upon the Government as well as upon the

Last edit 9 days ago by Fudgy 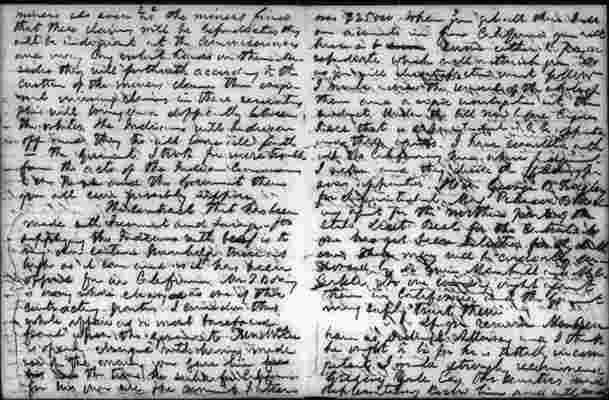 miners als [also] even as the miners find that there their claims will be repudiated they will be indignant at the Comissioners and may lay violent hands on them. Besides they will forthwith according to the custom of the miners claim these original mining claims in these reservations. This will bring on a difficulty between the whites. The Indians will be driven off and they too will loose all faith in the Government. I look for more trouble from the acts of the Indian Commissioners to the people and the Government than you all are possibly supposing.

The contract that has been made with Fremont and Lange - for supplying the Indians with beef is turning on certain knowledge twice as high as it can and as it has been offered for in California. Mr. J.D. King is every where charged as one of the contracting parties. I consider this whole affair as a most barefaced fraud upon the Government. Mr McKee is openly charged with having made use of the money you gave him for the travel he sailed for California for his own use. The amount I believe

was $25,000 When you get all these Indian accounts in from California you will have a sum either to pay or repudiate which will astonish you. Or as you will dissatisfaction must follow I would advise the unmask of the whole of them and a rigid investigation into their conduct. Under the bill now before Congress I see that a superintendent is to be appointed and three agents. I have consullted with all the Californians here whose judgment I value and they desire the following persons appointed. Hon. George B. Tingley for Superintendant. Maj. Pearsen B Reading agent for the Northern portion of the State. Lieut. Beale for the Central & one not yet been been selected for the Southern. These men will be cordially endorsed by Dr Gwin, Manhall and McCorkle. No one can say ought about them in California and the Government may safely trust them.

If you remove Mr Benham as District Attorney and I think he ought to be for he is tottally incompetent, I would strongly recommend Gregory Yale Esq. Our senators and Representatives know him and will most 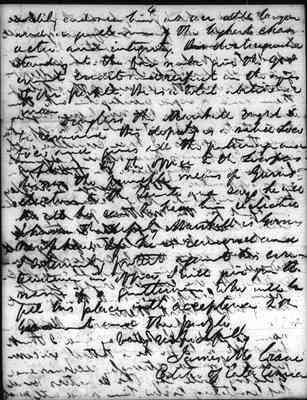 readily endorse him as an able lawyer and a gentleman of the highest character and integrity. His distinguished standing at the bar would give the government credit and respect in the eyes of our people. He is a total abstinence man.