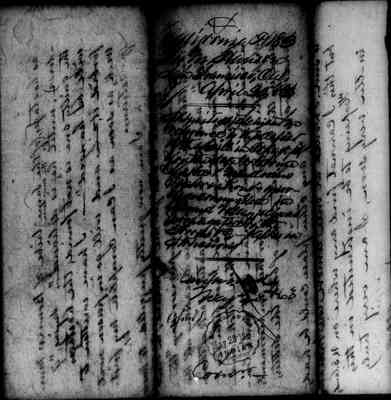 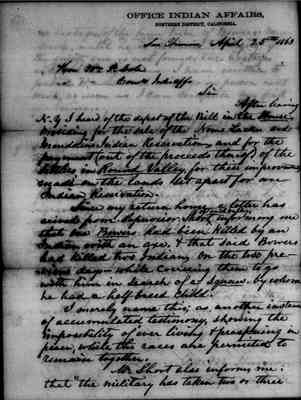 Sir After leaving N.Y I heard of the defeat of the Bill in the House, providing for the sale of the Nome Lackee and Mendocino Indian Reservations, and for the payment (out of the proceeds thereof,) of the Settlers in Round Valley, for their improvements made on the lands set apart for an Indian Reservation.

Since my return home a letter has arived from Supervisor Short of said valley, informing me that one Bowers had been killed by an Indian with an ax, & that said Bowers had killed two Indians on the two previous days — while coerscing them to go with him in search of a Squaw, by whom he had a half breed child.

I merely name this; as another instance of accumulated testimony, showing the imposibility of ever living & prospering in peace, while the races are permited to remain together.

Mr Short also informs me, that "the military has taken two or three

Last edit 2 months ago by Fudgy 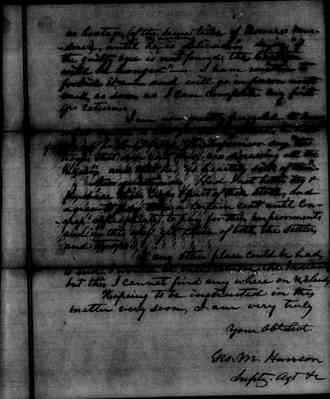 as hostages, (of the same tribe of Bowers murderer), until he the murderer is delivered" saying "if the guilty one is not found, the hostages will be hanged"—. I have written to forbid it, — and will go in person next week, as soon as I can complete my first qrs returns.

I am now greatly puzzled to know what action to take for [illegible line] The supervisor says "the troops that [illegible] are diseasing all the Indians" and that he "is heartily sick of them."

Now [illegible], Had I not better try & purchase their crops & part of their stock, and agree to pay them a certain rent until Congress appropriates to pay for their improvements and in this way get clear of both the settlers and troops.

If any other place could be had, to such I would at once remove the Indians but this I cannot find any where on U.S. lands.

Hopeing to be instructed in this matter very soon, I am very truly

Last edit 2 months ago by Fudgy
Displaying all 3 pages