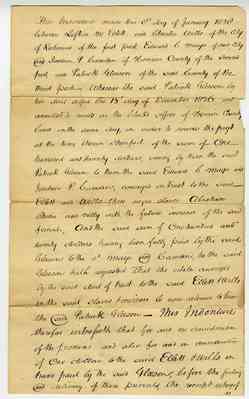 This Indenture made this 8" day of January 1828 between Loftin N. Ellett and Charles Wills of the City of Richmond of the first part, Edward C.Mayo of said city and Jordan P. Camden of Henrico County of the second part, and Patrick Gleeson of the said County of the third part. Whereas the said Patrick Gleeson by his deed dated the 15" day of December 1826 and admitted to record in the Clerks Office of Henrico County Court on the same day, in order to secure the Payt: [payment] at the time therein specified of the sum of One hundred and twenty dollars, owing by him the said Patrick Gleeson to them the said Edward L. Mayo and Jordan P. Camden, conveyed in trust to the said Ellett and Willis three negro slaves. Abraham China and Nelly with the future increase of the said females, And the said sum of One hundred and twenty dollars having been fully paid by the said Gleeson to the s.d Mayo and Camden, he the said Gleeson hath requested that the estate conveyed by the said deed of trust to the said Ellett & Wills in the said slaves & increase be now released to him the said Patrick Gleeson- This Indenture therefore witnesseth that for in consideration of the premises and also for and in consideration of One dollar to the said Ellett and Wills in hand paid by the said Gleeson, before the sealing and delivery of these presents, the receipt whereof is 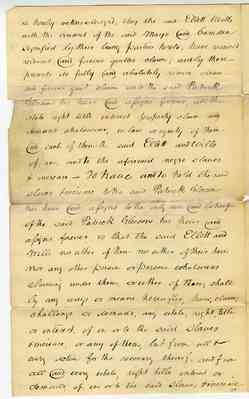 is hereby acknowledged, they the said Ellett & WIlls with the consent of the said Mayo and Camden signified by their being parties hereto, have remised released and forever quitted claim, and by these presents do fully and absolutely remise release and forever quit claim unto the said Patrick Gleeson his heir and assigns forever, all the estate right with interest property claim and demand whatsoever, in law or equity of them and each of them the said Ellett and Wills of, in, and to, the aforesaid negro slaves & increase. To have and to hold the said slaves & increase to the said Patrick Gleeson his heirs and assigns to the only use and behoof of the said Patrick Gleeson his heirs and assigns forever so that the said Ellett and Wills nor either of them nor either of their heirs nor any other person or persons whatsoever claiming under them, or either of them, shall by any ways or means hereafter, have claim, challenge or demand, any estate, right, title, or interest, of in or to the said slaves & increase, or any them, but from all & every action for the recovery thereof, and from all and every estate, right title interest or demand, of, in or to the said slave, & increase or 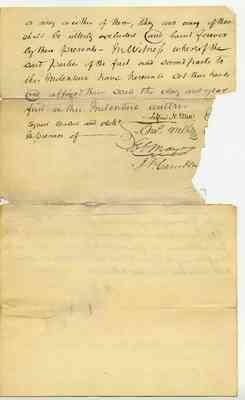 or any or either of them, they and every of them shall be utterly excluded and barree forever by these presents. In Witness whereof the said parties of the first and second parts to this Indenture have herunto set their hands and affixed their seals the day and year first in this Indenture written. 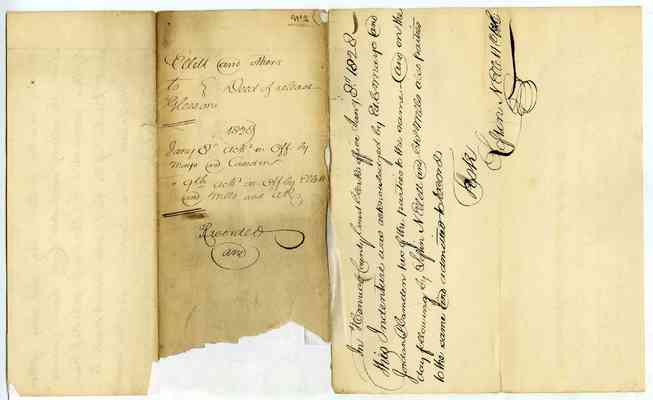 No. 2 Ellett and others to Gleeson } Deed of release 1828 Jany 8" ack.d in the office by Mayo and Camden " [Jany] 9th ack.d in Off by Ellett and Wills and AR Recorded and