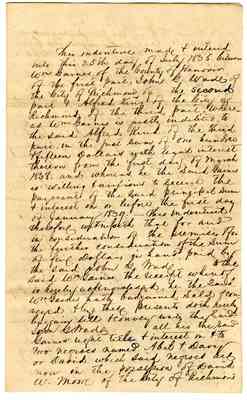 This indenture made and entered into this 25th day of July 1835, between Wm Gaines of the County of Hanover of the first part, John G. Wade of the City of Richmond of the second part & Alfred King of the City of Richmond of the third part. Whereas Wm Gaines is justly indebted to the said Alfred King of the third part, in the just sum of one hundred & fifteen dollars with legal interest thereon from the first day of March 1838, and whereas he the Said Gaines is willing & anxious to Secure the payment of the said principal Sum & interest on or before the first day of January 1839. This indentant therefore witnesseth that for and in consideration of the premises & for the further consideration of the sum of five Dollars in hand paid by the said John G. Wade. to the said W.m. Gaines the receipt whereof is hereby acknowledged, he the said W.m. Gaines hath bargained sold and conveyed & by these present doth hereby bargain sell & convey unto the Said John G. Wade all his the Said Gaines' right title & interest in & to two negroes named Abel & Davy or David which said negroes are now in the possession of David W. Moore of the City of Richmond 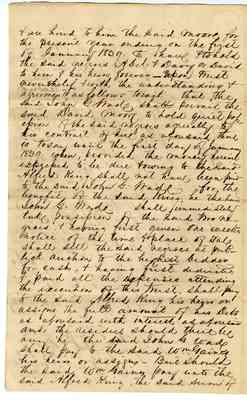 & are hired to him the Said Moore for the presentyear ending on the first of January 1839. To have & to hold the said negroes Abel & Davy or David to him & his heirs forever __ Upon Trust nevertheless & with the understanding & agreement as follows towit: That the said John G. Wade shall permit the said David Moore to hold quiet possession of the said negroes agreeably to his contract of hire at aforesaid thus is to say until the first day of January 1839 when, provided the money herein expressed to be due & owing to the Said Alfred King, shall not have been paid to the Said John G. Wade for the benefit of the Said King, he the Said John G. Wade shall immediately take possession of the Said two negroes, & having first given one week's notice of the time & place of sale shall sell the Said negroes at publick auction to the highest bidder for cash, & having first deducted & paid all the expenses attending the execution of this trust, shall pay to the said Alfred King his heirs or assigns the full amount of his Debt and the residual shoulf there by any he the Said John G. Wade shall pay to the said Wm. Gaines his heirs or assigns - But should the said Wm. Gaines pay unto the said Alfred King, the Said Sum of 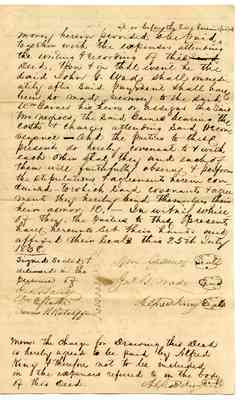 money herein provided to be paid [inserted above]: at or before the time herein specified] together with the expenses attending the writing & recording of this [struck: Said] Deed, then & in that event he the Said John G. Wade shall immediately after Said payment shall have been so made reconvey to the said W.m. Gaines his heirs or assigns the said two negroes, the Said Gaines bearing the costs & charges attending Said reconveyance -- And the parties to these presents do hereby covenant to & with each other that they and each of them will faithfully observe & perform the stipulations & agreements herein contained -- to which Said covenants & agreements they hereby bind themselves their heirs admor: &c. -- In witness where of they, the parties to these presents have hereunto Set their hands and affixed their Seals this 25th July 1838. Wm Gaines (Seal) Jno. G. Wade (Seal) Alfred King (Seal) Signed Sealed & delivered in the presence of } Geo. W. Talley Wm. B. Starke James R Ratcliffe

Mem: The charge for Drawing this Deed is hereby agreed to be paid by Alfred King & therefore not to be included in the expenses referred to in the body of this Deed. Alfred King (Seal) 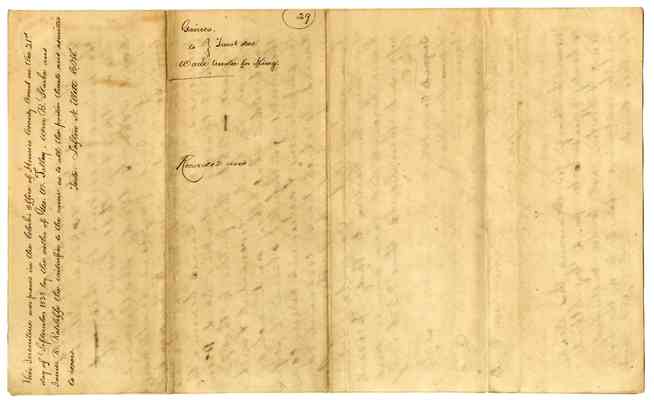 29 Gaines to Wade trustee for King } Trust deed. Recorded and

This Indenture was proved in the Clerk's Office of Henrico County Court on the 21st day of September 1838 by the oaths of Geo: W: Talley, Wm B. Starke, and James R. Ratcliffe the witnesses to the same as to all the parties thereto and admitted to record. Teste Loftin N. Ellett