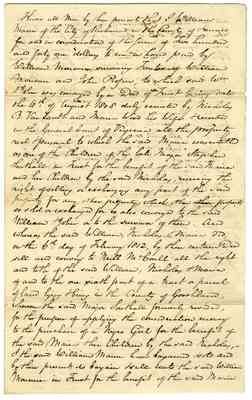 Know all men by these presents that I William Mann of the City of Richmond in the County of Henrico for and in consideration of the sum of two hundred and forty one dollars to me in hand paid by William Moncure, surviving trustee of William Moncure and John Prosser, to which said Wm & John was conveyed by a Deed of Trust bearing date the 10th of August 1808 duly executed by Nicholas B. Van Landt and Maria Wood his Wife & recorded in the General Court of Virginia all the property real & personal to which the said Maria was entitled as one of the Children of the late Major Stephen Southall in Trust for the benefit of the said Maria and her Children by the said Nicholas, reserving the right of selling or exchanging any part of the said property for any other property, which the other property so sold or exchanged for is also conveyed to the said William & John or to the survivor of them. And whereas the said William, Nicholas, and Maria did, on the 6th day of February 1812, by their certain Deed sell and convey to Neill McCoull all the right and title of the said William, Nicholas & Maria of and to the one sixth part of a tract or parcel of land lying & being in the County of Goochland, whereon the said Major Southall formerly resided, for the purpose of applying the consideration money to the purchase of a Negro Girl for the benefit of the said Maria & her Children by the said Nicholas,- I the said William Mann have bargained sold and by these presents do bargain & sell unto the said William Moncure in Trust for the benefit of the said Maria 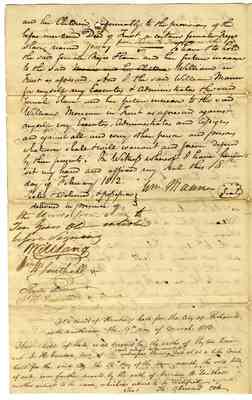 and her Children, [illegible, tear in page which is folded over] to the provisions of the before mentioned Deed of Trust, a certain female Negro slave named Jenny from seven to ten years old as to have and to hold the said female Negro Have and her future increase to the said William in Trust as aforesaid. And I the said William Mann for myself my Executors and administrators the said female slave and her future increase to the said William Moncure in Trust as aforesaid against myself my Executors, Administrator and Assignees and against all and every other person and persons whatsoever shall and will warrant and forever defend by these presents. In Witness whereof I have herein to set my hand and affixed my seal this 18th day of February 1812. Wm Mann {Seal} Sealed & Delivered, and possession delivered in presence of the words from seven to ten years old- interlined before signing William and Wm W Southall [X or 4?] Peyton Drew [checkmark] J. H. Eustace [checkmark] At a court of Hustings held for the City of Richmond, at the courthouse, the 9th day of March 1812 This Bill of Sale, was proved by the oaths of Peyton Drew and J. H. Eustace, two of the witnesses thereto and ordered to be recorded. And as at a like Court held for the said City the 12th day of the same month, the said bill of sale, was further proved by the oath of William M. Southall another witness to the same, which was ordered to be certified Test Th. C, Howard Clk 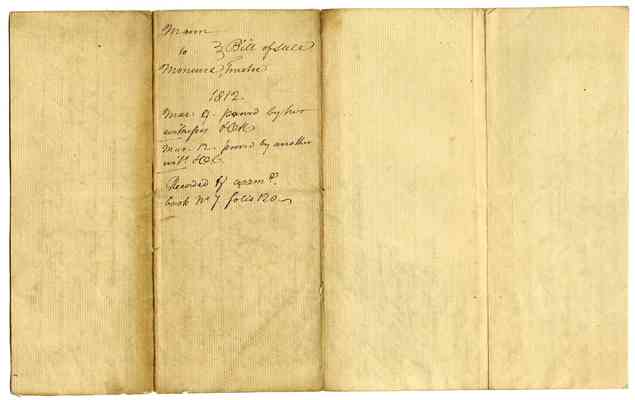 Last edit 2 months ago by Nathani
Displaying all 3 pages