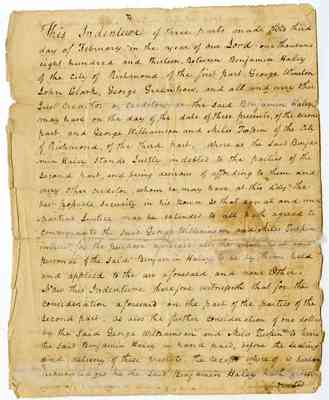 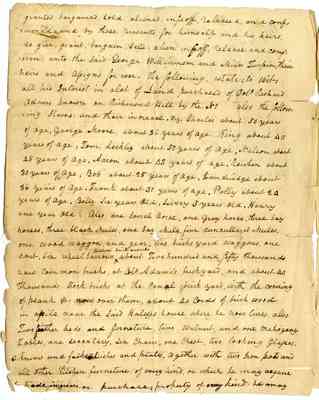 granted bargained, sold, aliened, enfeoff, released, and confirmed, and by these presents for himself and his heirs, do give, grant, bargain, sell, alien enfeoff, release and confirm, unto the said George Williamson and Miles Turpin, their heirs and assigns for ever. The following, estate; to wit: all his Interest in a lot of Land purchased of Colo. Richard Adams known on Richmond Hill by No. also the following slaves and their increase. viz. Charles about 50 years of age, George Moore, about 36 years of age. King about 40 years of age, Tom Lockley about 50 years of age, Nelson about 45 years of age, Aaron about 43 years of age, Reuben about 30 years of age, Bob about 25 years of age, Dandriedge about 36 years of age, Frank about 30 years of age, Polly about 24 years of age, Billy Six years old, Silvey 5 years old, Henry one year old. Also one Sorrel Horse, one Grey horse, three bay horses, three black mules, one bay mule, five duncullared [dun colored] mules, one wood waggon, and gear, two bricks yard waggons, one cart, six wheelbarrows twelve brick mouls [moulds?] about Two hundred and fifty Thousands raw common bricks, at Colo. Adams's brickyard, and about 40 Thousands stock bricks at the Canal brick yard, with the covering of plank &c now over them, about 40 Cords of brick wood in a pile near the said Haley's house where he now lives also Two feather beds and furniture, two Walnut, and one Mehongany [Mahogany] Tables, one seccatary [secretary], six chairs, one chest, two looking glasses 6 knives and forks, 6 Dishes and plates, together with two iron pots and all other kitchen furniture, of every kind, or which he may acquire by trade increase or purchase; property of every kind he may 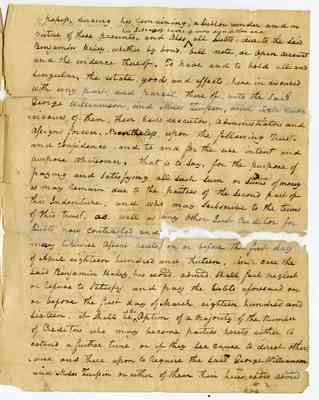 possess, dureing [during] his remaining, a Debtor under and in virtue of these presents, and also his Library of books of every description and all Debts due to the said Benjamin Haley, whether by bond, bill, note, or open account and the evidence thereof. To have and to hold all and singular, the estate, goods, and effects, here in discribed [described] with every part, and parcel there of, unto the said George Williamson, and Miles Turpin, and their survivours [survivors], of them, their heirs executors, administrators and assigns forever. Nevertheless, upon the following Trust, and confidence and to and for the use intent and purpose whatsoever. that is to say, for the purpose of paying and satisfying all such sum or sums of money as may remain due to the parties of the second part of this Indenture, and who may subscribe to the terms of this trust, as well as any other Just Creditor for Debts now contracted and [page torn- illegible] may likewise assent hereto, on or before the first day of April eighteen hundred and thirteen, in case the said Benjamin Haley, his exors. [executors] admrs. [administrators] shall fail neglect or refuse to satisfy, and pay the Debts aforesaid on or before the first day of March eighteen hundred and sixteen. it shall be at the option of a Majority of the Number of Creditors who may become parties hereto either to extend a further time, or if they see cause to direct otherwise and there upon to require the said George Williamson and Miles Turpin or either of them their heirs exors [executors] admrs [administrators] 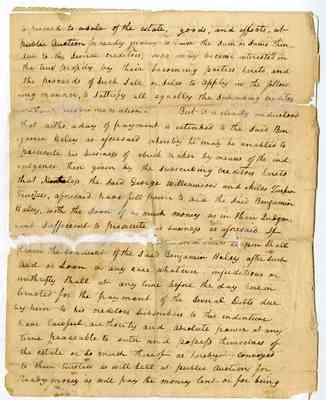 to proceed to a sale of the estate, goods, and effects, at public auction for ready money to raise the sum or sums then due to the several creditors, who may become interested in the trust property by their becoming parties hereto, and the proceeds of such sale or sales to apply in the following manner, to sattisfy [satisfy] all equally the subscribing creditors [illegible]. But it is clearly understood that altho [although] a day of payment is extended to the said Benjamin Haley as aforesaid whereby he may be enabled to prosecute his business of a brick maker by means of the indulgence then given by the subscribing creditors hereto that Nevertheless the said George Williamson and Miles Turpin Trustees, aforesaid have full power to aid the said Benjamin Haley, with the Loan of as much money as in their Judgment sufficient to prosecute his business as aforsaid. If [page torn- illegible] and Miles Turpin shall deem the conduct of the said Benjamin Haley after such Aid or Loan in any case whatever injuditious [injudicious] or unthriftly shall at any time before the day herein limited for the payment of the several Debts due by him to his creditors subscribers to this indenture have lawful authority and absolute power at any time peaceable to enter and possess themselves of the estate or so much thereof as hereby conveyed to them trustees as will sell at public auction for ready money as will pay the money lent or for being 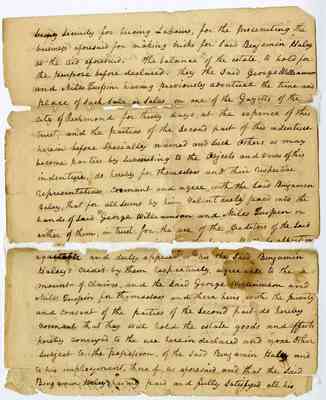 being security for hireing [hiring] Labours, for the prosecuting the business aforesaid for making bricks for the said Benjamin Haley as the aid aforesaid. The balance of the estate, to hold for the purpose before declared. they the said George Williamson and Miles Turpin having previously advertised the time and place of such sale, or sales, in one of the Gazetts [Gazettes] of the city of Richmond for thirty days, at the expence [expense] of this trust, and the parties of the second part of this indenture herein before specially named and such others, as may become parties by subscribing to the Objects and vews [views] of this indenture, do hereby for themselves and their respective representatives, covenant and agree, with the said Benjamin Haley, that for all sums by him volentarely [voluntarily] paid into the hands of George Williamson and Miles Turpin, or either of them, in trust for the use of the creditors of the said [page towrn- illegible] equitable and duly appeared, [illegible] his the said Benjamin Haley's credit by them Respectively, agreeable to the amount of claims, and the said George Williamson and Miles Turpin for themselves and their heirs, with the privity and consent of the parties of the second part do hereby covenant that they will hold the estate goods and effects hereby conveyed to the use herein declared and none other subject to the possession, of the said Benjamin Haley and to his imployment [employment], there of, as aforesaid, and that the said Benjamin Haley, having paid and fully satisfyed [satisfied] all his