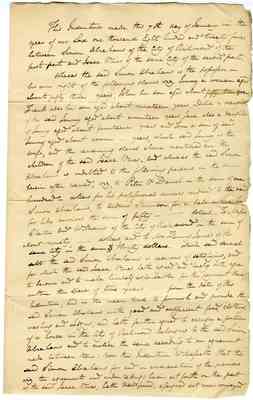 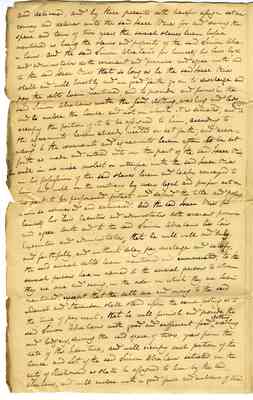 and delivered, and by these presents doth transfer assign set over convey and deliver unto the said Isaac Vines for and during the space and term of two years the several slaves herein before mentioned as being the slaves and property of the said Simon Abrahm and the said Simon Abrahams for himself his heirs Exors [executors] and administrators doth convenant and promise and agree with and to the said Isaac Vines that so long as he the said Isaac Vines shall and will honestly and in good faith go on to discharge and pay the debts herein mentioned, and to provide and furnish the said Simon Abrahams with the food clothing, washing and lodging and to enclose the house and Lot on which it is situated, and to occupy the portion of it to be assigned to him, according to the agreements herein already recited or set forth; and according to the the covenants and agreements herein after to be set forth as made and entered into the part of the said Isaac Vines in his possession of the said slaves herein and hereby conveyed to him, but will on the contrary by every legal and proper act on his part to be performed protect and defend the title and possession so conveyed and delivered. And the said Isaac for himself his heirs Executors and administrators, that he will well & truly and faithfully, and without delay, pay, discharge and satisfy, the said several debts herein mentioned and enumerated, to the several persons herein named to the several persons to whom they are due and owing, in the order in which they are herein mentioned, except that the debts due and owing to the said Daniel and Stevenson shall stand upon the same footing as to the time of payment: that he will furnish and provide the said Simon Abrahams with good and sufficient food clothing washing and lodging, during the said space of two years from the date of this Indenture, and will occupy such portion of the house and Lot of the said Simon Abrahams situated in the city of Richmond as shall be assigned to himby the said Abrahams, and will enclose with a good fense and enclosure of wood, 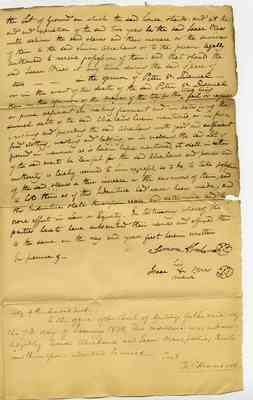 The Lot of ground on which the said house stands: and at the end and expiration of the said two years he the said Isaac Vines will deliver the said slaves and their increase or the survivors of them to the said Simon Abrahams or to the person legally authorised to recieve possession of them: and that should the said Isaac Vines at any time during the said Space of two [blank] [blank] in the opinion of Peter V. Daniel - or in the event of the death of the said Peter V. Daniel then in the opinion of the Mayor of the City for the time being fail or refuse or prove deficient in making payment and in satisfying the several debts of the said Abrahams herein mentioned, or in furnishing and providing the said Abrahams with good and sufficient food clothing, washing and lodging, or in enclosing the said Lot of ground in manners as is herein before mentioned, it shall in either of the said events be lawful for the said Abrahams and power and authority is hereby reserved to him expressly so to do, to take possession of the said slaves & their increase or the survivors of them, and to hold them as if this Indenture had never been made, and this Indenture shall therefore cease and determine and [be of? - torn page] none effect in Law or Equity. In testimony whereof the parties hereto have subscribed their names and affixed their [seals] to the same on the day and year first herein written

In presence of - [blank]

City of Richmond towit In the office of the Court of Hustings for the said city the 7th day of January 1825, This Indenture was acknowledged by Simon Abrahams and Isaac Vines, parties thereto and thereupon admitted to record Test Th: [Thomas] C Howard clk 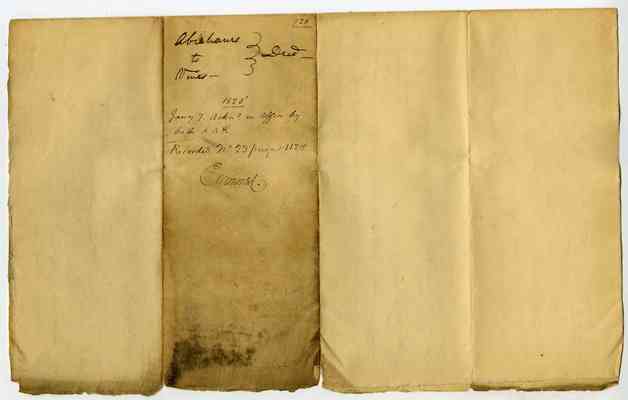 Last edit 3 months ago by Nathani
Displaying all 4 pages