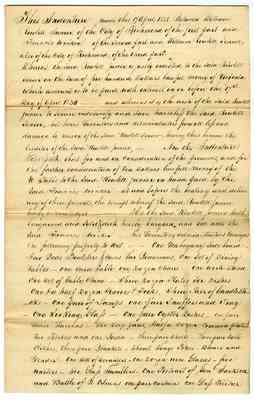 This Indenture made this 17 April 1828 Between William Rowlett Junior, of the City of Richmond of the first part and Francis Wicker of the second part, and William Rowlett senior also of the City of Richmond, of the third part Whereas the said Rowlett junior, is justly indebted to the said Rowlett senior in the sum of five hundred Dollars lawful money of Virginia which amount is to be paid with interest on or before the 17th Day of April 1830 --- and whereas it is the wish of the said Rowlett junior to secure indemnify and save harmless the said Rowlett senior, his heirs Executors and administrators from all loss and damage by reason of the said Rowlett senior having thus become the Creditor of the said Rowlett junior ~ Now thy Indenture Witnesseth, that for and in consideration of the premises, and for the farther consideration of ten Dollars lawfull money of the U States to the said Rowlett junior in hand paid by the said Frances Wicker ~ at and before the Sealing and delivering of these presents, the receipt whereof the Rowlett junior hereby acknowleges ~ He the said Rowlett junior hath bargained and sold & doth hereby bargain and sell unto the said Francis Wicker--his Executors, administrators & assigns the following properety to wit ~ One Mahogany side board Two Beds Boalsters of cases Two Beaureaus, one set of Dining Tables ~ one card Table one Dozen Chairs ~ one work Stand One Set of Table China ~ Three Dozen Plates six Dishes One & a half Dozen Knives & Forks, Three Pair of Candlesticks --- one pair of Lamps one pair snuffers and Tray --One Looking Glass -- one pair Oyster Dishes -- one pair Sause Tureens -- Six Deep pans, Half a Dozen Common plates two Pitchers and one Basin -- Three pair Sheets -- Three pair Table Clothes, three pair Blankets -- Shovel Tongs Poker -- Blower and Tender -- One Sett of Decanters -- One Dozen wine Glasses -- five waiters -- Six Glass Tumblers -- One Portrait of Gen Jackson and Battle of N Orleans one pair curtains one Glass Pitcher 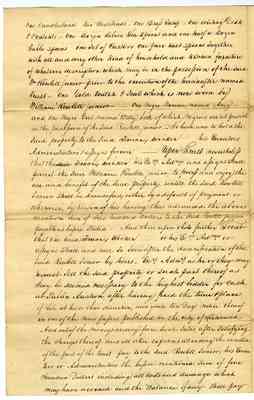 one Candlestand two Bedsteads - one Brass Lamp - one writing Desk & Contents - one Dozen Silver Tea Spoons and one half a Dozen Table Spoons one Set of Castors one pair Salt Spoons Together with all and every other Kind of household and Kitchen furniture of whatever description which may be in the possession of the said Wm Rowlett junior prior to the execution of the hereinafter named trust - one Gold Watch & Seal which is now worn by William Rowlett junior - one Negro Woman named Amy - and one Negro Girl named Betty both of which Negroes are at present in the possession of the said Rowlett junior -- To have and to hold the said property to the said Francis Wicker his Executors Administrators & assigns forever -- Upon Trust nevertheless that the said Francis Wicker his Exrs Amrs and assigns shall permit the said William Rowlett junior, to possess and enjoy the use and benefit of the said property, untill the said Rowlett senior shall be damnified, either by a default of payment or otherwise, by reason of his having thus advanced the above mentioned sum of Five hundred Dollars to the said Rowlett junior payable as before stated -- And there upon this further Trust that the said Francis Wicker or his Exrs Admrs or assigns shall and will so soon after the damnification of the said Rowlett senior by his heirs - Exrs Admrs as he or they may request sell the said property or such part thereof as may be deemed necessary to the highest bidder for cash at Public Auction, after having fixed the time & place of Sale at his or their discretion, and given ten Days notice thereof in one of the news papers published in the City of Richmond And out of the money arising from such sales, after satisfying the charges thereof and all other expenses attend the execution of this part of the trust pay to the said Rowelett senior, his Execu tors or Administrators the before mentioned sum of five Hundred Dollars including all costs and damage which may have accrued and the balance if any shall pay 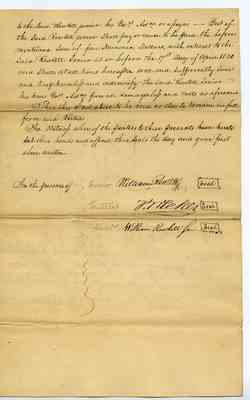 to the said Rowlett junior his Exrs Admr or assigns -- But if the said Rowlett junior shall pay or cause to be paid the before mentioned sum of five Hundred Dollars, with interest to the said Rowlett Senior at or before the 17th Day of April 1830 and shall at all times hereafter well and suffiecently [sic] save and keep harmless and indemnify the said Rowelett Senior his heirs Exrs Admr from all damages loss and costs as aforesaid -- Then this Indenture to be void or else to remain in full force and virtue In Witness whereof the parties to these presents have hereto set their hands and affixed their seals the Day and year first above written

In the presence of

Last edit 5 months ago by Gbcassada 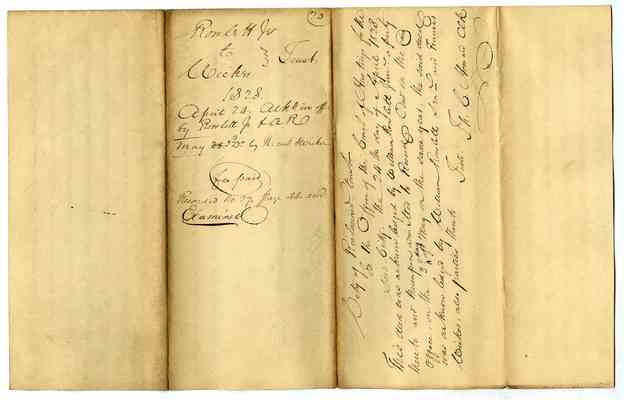 City of Richmond, towit: In the Office of the Court of Hustings for the said City, the 24th day of April 1828. This deed was acknowledged by William Rowlett Junr. a party thereto and thereupon admitted to Record and in the said Office, on the 3d. day of May in the same year, the said deed was acknowledged by Wiliam Rowlett Senr and Francis Wicker, also parties thereto Teste, Th: C. Howard clk

Last edit 5 months ago by Gbcassada
Displaying all 4 Page