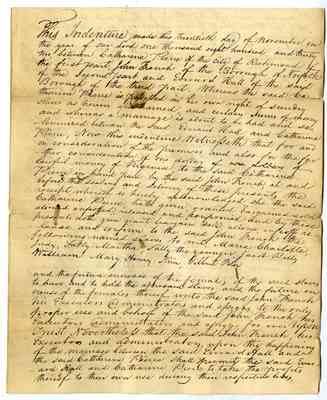 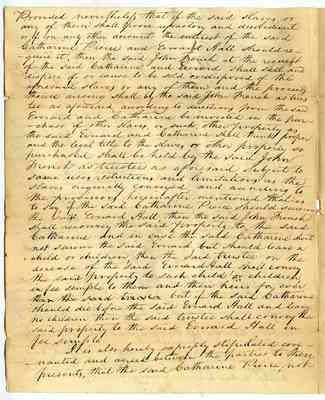 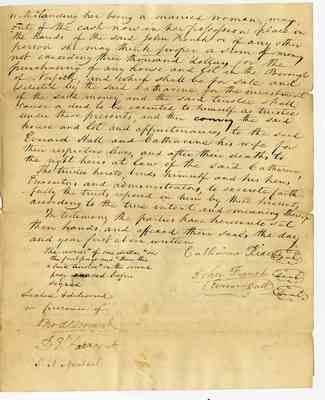 [not]withstanding her being a married woman, may out of the cash now in her possesion place in the hands of the said John French or of any other person she may think proper a sum of money not exceeding three thousand dollars for the purchasing of any house and lot in the Borough of Norfolk, and which shall be for sale and selected by the said Catharine for the investment of the said money, and the said the trustee shall cause a deed to be executed to himself as trustee under these presents, and then convey the said house and lot and apportenances to the said Everard Hall and Catharine his wife for their respective lives, and after their death to the right heirs at law of the said Catharine. The trustee hereto, binds himself and heirs Executors and administrators, to execute faithfully the trusts reposed in him by these presents according to the true intent and meaning thereof In testimony the parties have hereunto set their hands and affixed their seals, the day and year first above written Catharine Pierce {Seal} John French {Seal} Everard Hall {Seal} The words "of one dollar" on the first page and "then the "said trustee" on the second page erased before signed Sealed & delivered in presence of Jno John] Allmand D E Farragut S A Marchant 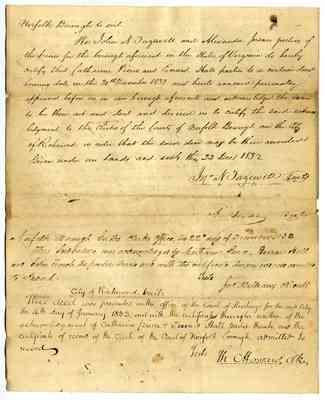 Norfolk Borough to wit We John N Tazewell and Alexander Jordan justices of the peace for the borough aforesaid in the state of Virginia do hereby certify that Catherine Pierce and Everard Hall parties to a certain deed bearing date on the 20th November 1832 and hereto annexed personally appeared before us in our borough aforesaid and acknowledged the same to be their act and deed and desired us to certify the said acknowledgment to the Clerk of the Court of Norfolk Borough and the City of Richmond in order that the said deed may be there recorded Given under our hands and seals this 22 Decr 1832 Jno [John] N Tazewell {seal} A. Jordan {seal}

Norfolk Borough in the Clerks office, the 22d day of December 1832 This indenture was acknowledged by Catherine Pierce, Everard Hall and John French the parties thereto and with the certificate thereon endorsed admitted to Record. Teste Jno [John] Williams Cl [Clerk?]: Cur:

City of Richmond to wit: This deed was presented in the office of the Court of Hustings for the said City, the 4th day of January 1833, and with the certificates thereafter written of the acknowledgement of Catherine Pierce & Everard Hall, parties thereto, and the certificate of record of the Clerk of the Court of Norfolk borough, admitted to record Teste, Th: [Thomas] C. Howard clk [Clerk] 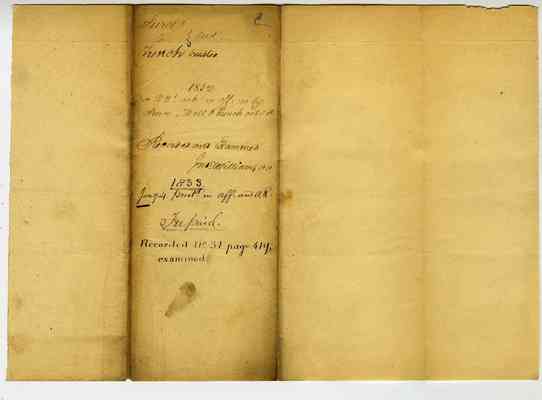 Last edit 2 months ago by Nathani
Displaying all 5 pages