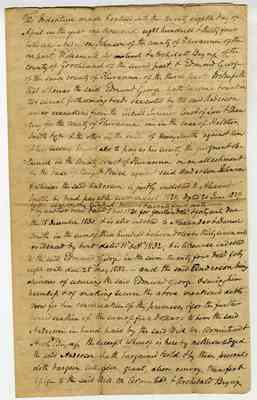 This Indenture made & entered into this twenty eighth day of April in the year one thousand eight hundred & thirty four between Anderson Johnson of the county of Fluvanna of the one part, William M. Armistead & Archibald Bryce j of the county of Goochland of the second part, & Edmund George of the said county of Fluvanna of the third part: Witnesseth that whereas the said Edmund George hath become bound in two several forthcoming bonds, executed by the said Anderson under execution, from the Circuit Superior Court of Law & Chanccery for the county of Fluvanna, one in the case of Hatcher, Smith &c'a & the other in the case of Henry Smith against him & has become bound also to pay as his surety the judgment obtained in the county court of Fluvanna on an attachment in the case of Benj. [Benjamin] H Powell against said Anderson Johnson & Whereas the said Anderson is justly indebted to Alexander C Smith by bond payable first March 1829. dated 20 June 1829 in the sum of one hundred dollars & seventy four cents--- & by another bond dated 5 Nov. 1831 for fourteen doll. [dollars] & forty cents the 15 December 1830. & is also indebted to Alexander & Daniel Smith in the sum of three hundred & eleven dollars thirty seven cents evidenced by bond dated 11 Oct. 1832; & is likewise indebted to the said Edmund George in the sum twenty four dollr. [dollars] forty eight cents due 28 May 1832. -- and the said Anderson being desirious of securing the said Edmund George & saving him harmless & of making secure the above mentioned debts - now for & in consideration of the premise, offer the further consideration of the sum of five dollars to him the said Anderson in hand paid by the said Will. [William] M. Armistead & Archd [Archibald] Bryce jr the receipt whereover is hereby acknowledged the said Anderson hath bargained & sold & by these presents doth bargain, sell, give, grant, alien, convey, transfer & assign to the said Will. M. Amistead, & Archibald Bryce jr 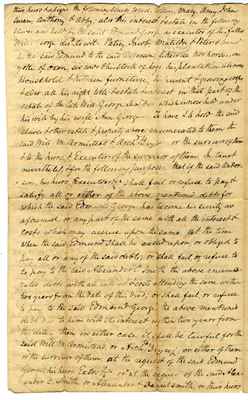 their heirs & assigns the following slaves to wit. Collin, Mary, Amy, John Susan, Anthony & Abby; also his interest & estate in the following slaves now held by the said Edmund George as executor of his father Will. [William] George decd. to wit: Patsey, Jacob, Matilda (12 yr old) & Peter & loaned by the said Edmund to the said Anderson; likewise two horses, one yoke of oxen, six cows & his stock of hogs, his plantation utensils Household & Kitchen furniture, his present & growing crops & also all his right, title & estate & interest in that part of the estate of the late Will. George Senr. decd which is now held under his wife by his wife Ann George. To have & to hold the said slaves & other estate & property above enumerated to them the said Will. M. Armistead & Archd Bryce j or the survivor of them & to the heirs & Executors of the survivor of them In trust nevertheless & for the following purposes, that if the said Anderson, his heirs, Executors &c shall fail, or refuse to pay & satisfy all or either of the above mentioned debts for which the said Edmund George has become his surety as aforesaid, or any part of the same with all the interest & costs which may accrue upon the same, at the time when the said Edmund shall be called upon, or obliged to pay all or any of the said debts; or shall fail, or refuse to to pay to the said Alexander C. Smith the above enumerated debts with all interest & costs attending the same within two years from the date of this deed; or shall fail; or refuse to pay to the said Edmund George the above mentioned debt due to him with its interest within two years from this date - then in either case it shall be lawful for the said Will. M. Armistead, or Archd Bryce jr, or either of them or the survivor of them, at the request of the said Edmund George, his heirs, Extrs [Executors] &ca or at the request of the said Alexander C. Smith or Alexander & Daniel Smith, or their heirs 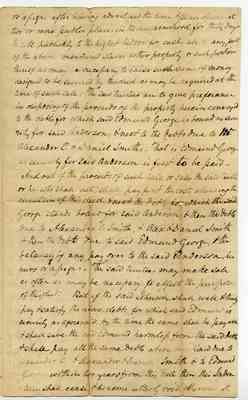 or assigns, after having advertised the time & place of sale at two or more public places in the neighborhood for thirty days to sell publickly [publicly] to the highest bidder for cash all or any part of the above mentioned slaves & other property or such portion thereof as may be necessary to raise such sums of money designed to be secured by this deed as may be required at the time of such sale. The said trustees are to give preferance in disposing of the proceeds of the property herein conveyed to the debts for which said Edmund George is bound as security for said Anderson, & next to the debts due to Alexander C. & Daniel Smiths - That is Edmund George as security for said Anderson is first to be paid - And out of the proceeds of such sale or sales the said trustees or he who shall act, shall pay first the costs attending the execution of this deed, & next the debts for which the said George stands bound for said Anderson, & then the debts due to Alexander C. Smith, & Alex & Daniel Smith & then the debt due to said Edmund George, & the balance if any pay over to the said Anderson, his heirs or assigns - The said trustee may make sale as often as may be necessary to effect the purposes of this deed. But if the said Johnson shall well & truly pay & satisfy the above debts for which said Edmund is security as aforesaid, by the time the same shall be payable & shall save the said Edmund harmless from the said debts & shall pay all the same debts above mentioned due to Alexander C & Alexander & Daniel Smith & to Edmund George within two years from this date then this Indenture shall cease & become utterly void, otherwise it 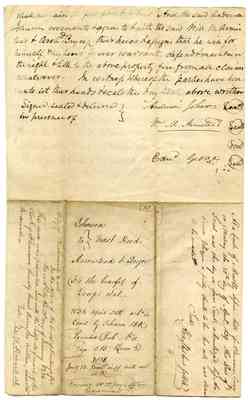 shall remain in full force & virtue. And the said Anderson Johnson covenants & agrees to & with the said Will. M Armistead & Archd Bryce jr their heirs & assigns that he will for himself, & his heirs forever warrant, defend & maintain the right & title to the above property free from all claims whatsoever - In witness whereof the parties have hereunto set their hands & seals this day & date above written Signed, sealed & delivered in presence of Anderson Johnson {Seal} Wm. M. Armistead {Seal} {Seal} Edmd George {Seal}

At a Court of Monthly Session held for Fluvanna County on Monday the 28th day of April 1834 This Deed of Trust, was this day in open Court acknowledged by Anderson Johnson a party thereto to be his act and Ordered to be recorded Teste Abra. [Abraham] Shepherd Jr. C.C. [Clerk of Court]

City of Richmond to wit: In the Office of the Court of Hustings for the said city the 13th day of January 1836 -- This deed was presented, and with the certificate of record of the Clerk of Fluvanna County Court thereafter written, admitted to record -- Teste N. P. Howard clk [clerk]

Last edit 9 days ago by Nathani
Displaying all 4 pages