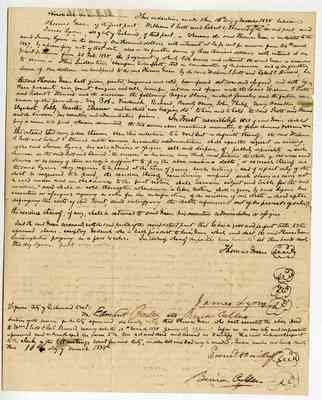 [[struck]: Know all]] This indenture made this 16th day of March 1838 between Thomas Green of the first part, William S Scott and Robert C Stanard of the second part, and James Lyons, all of the City of Richmond, of third part: - Whereas the said Thomas Green is indebted to the said James Lyons in the sum of One thousand dollars with interest at Six percent pr. [per] annum given 24th March 1837, by a promissory note of that date, also in the further sum of three thousand dollars with interest at six percent p. [per] annum from 20 Feb. 1838, the payment of which two sums and interest the said Green is anxious to secure -- This Indenture therefor Witnesseth, the in consideration of the premises, and of the further sum of one dollar in hand paid to the said Thomas Green by the said William S. Scott and Robert C. Stanard, he the said Thomas Green hath given, granted, bargained and sold, transferred set-over and assigned, and doth by these presents give, grant, bargain and sell, transfer set over and assign under the said William S. Scott and Robert C Stanard and the survivor, the following Negro Slaves, males & females and the future increase of the females - viz Bob- Frederick, Richard, Beverly Henry, John, Philip, Mary Hamilton, Elizabeth, Sally, Martha, Eleanor and her child now two years old, to have and to hold to said Scott and Stanard and the survivor, his executors and administrators forever. In Trust nevertheless that if said Green shall pay or cause to be paid, whenever demanded, the two sums above mentioned amounting to four thousand dollars & the interest that may be due thereon, then this indenture to be void but in default thereof, the said William S. Scott and Robert C Stanard and the survivor, his executors or administrators, shall upon the request in writing, of the said James Lyons, his exers [executors], admors [administrators] or assigns, sell and dispose of, publicly or privately, in such manner as the said Scott and Stanard - the survivor or his exers [executors] may think most judicus [judcious], the whole of the above named slaves or so many of them as may be sufficient to pay the above mentioned debts, or so much thereof as the said Lyons may request to be paid at the time of giving such notice - and if a part only of the debt be required to be paid, the residue thereof remaining unpaid, such slaves as may not be sold under and in obedience to the first notice, shall remain subject and liable for the said residue and shall be sold thereafter whenever a like notice shall be given by said Lyons his executors or assigns requiring a sale for the satisfaction of the residue of his debts -- And after defraying the costs of this Trust, and satisfying the debts aforesaid out of the proceeds of sale, the residue thereof, if any, shall be returned to said Green his executors administrators or assigns and the said Green covenants with the said parties of the second & third part, that he has a good and perfect title to the aforesaid slaves - excepting Frederick who is liable for a debt to Jones Green, which said debt, the said Thomas Green contemplates paying in a few weeks. In witness whereof the parties have hereunto set their hands & seals this day & year first above written Thomas Green {Seal} {Seal} {Seal} James Lyons {Seal}

Virginia City of Richmond to wit: We Edmund Bailey and Benim [Benjamin?] Cullen Justices of the Peace in the City aforesaid do hereby certify that Thomas Green who hath executed the above deed to Wm S Scott & Ro: [Robert] C Standard, bearing date the 16th March 1838 personally appeared before us in our city and corporation aforesaid and acknowledged the same to be his act and deed and desired us to certify the said acknowledgment to the clerk of the Hustings court for said City, in order that said Deed may be recorded. Given under our hands & seals this 16th day of March 1838

Last edit 7 days ago by Nathani 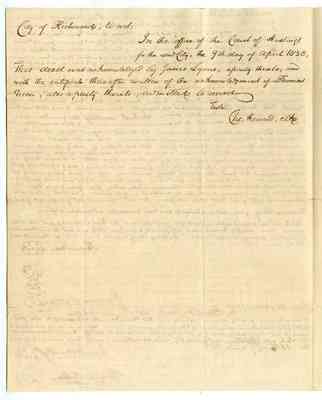 City of Richmond, to wit; In the office of the Court of Hustings for the said City, the 9th day of April 1838, This deed was acknowledged by James Lyons, a party thereto, and with the certificate thereafter written of the acknowledgment of Thomas Green, also a party thereto, admitted to record. Teste Chs. [Charles] Howard clk [Clerk]

Last edit 7 days ago by Nathani 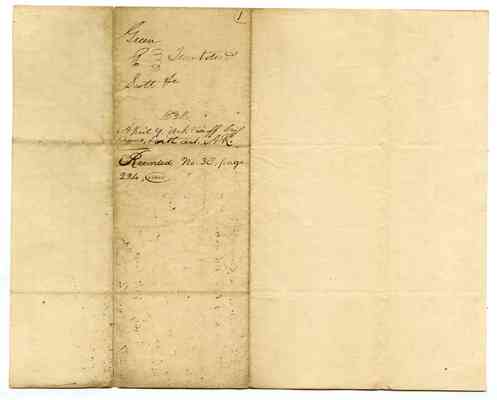 Last edit 7 days ago by Nathani
Displaying all 3 pages