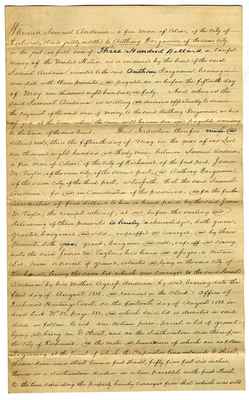 Whereas Samuel Anderson, a free man of colour, of the city of Richmond, stands justly indebted to Anthony Bargamin, of the same city, in the just and full sum of Three Hundred Dollars - lawful money of the United States, as is evidenced by the bond of the said Samuel Anderson, executed to the said Anthony Bargamin, bearing even date with these presents, and payable on or before the fiftheenth day of May one thousand eight hundred and forty. And whereas the said Samuel Anderson is willing and desirous effectually to secure the payment of the said sum of money, to the said Anthony Bargmin, or his assigns, at the time when the sum will become due and payable according to the tenor of the said bond. This Indenture therefore made and entered into, this the fifteenth day of May in the year of our Lord one thousand eight hundred and thirty nine, between Samuel Anderson, a free man of colour, of the city of Richmond of the first part, James M. Taylor, of the same city, of the second part, and Anthony Bargamin, of the same city, of the third part, witnesseth; that the said Samuel Anderson, for and in consideration of the premises, and for the futher Consideration of five dollars to him in hand paid by the said James M. Taylor, the receipt whereof, at and before the sealing and delivering of these presents is hereby acknowledged, hath given, granted, bargained and sold, enfeoffed and conveyed, and by these presents, doth give, grant, bargain and sell, enfeoff and convey, unto the said James M. Taylor, his heirs and assigns, a certain Lot, piece or parcel of ground, situated and lying in the said city of Richmond, being the same lot which was conveyed to the said Samuel Anderson by his mother, Agness Anderson, by deed bearing date the first day of August 1833, and recorded in the clerk's office of Richmond Hustings Court, on the fourteenth day of August 1833 in deed book No 32 page 181, and which said lot is described in said deed as follows, to wit: one certain piece, parcel or lot of ground lying and being on E street, and on the Southwestern side thereof, in the City of Richmond, and the metes and boundaries of which are as follows: Begining at the point of which the Corporation line intersects E street, thence down said street toward first street, fifty five feet six inches, thence in a Southwestern direction in a line parallel with first Street, to the line separating the property herby conveyed from that which was sold 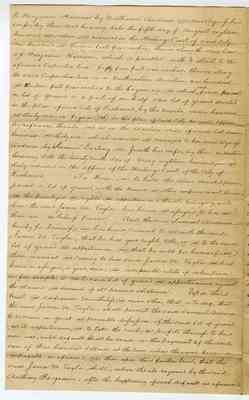 to Benjamin Harrison by Nathaniel Anderson and said Agness, his wife, by their deed bearing date the fifth day of August eighteen hundred and sixteen, and recorded in the Hustings Court of said City, one hundred and thirteen feet four inches, thence along the said line of Benjamin Harrison, which is parallel with E street, to the aforesaid Corporation line fifty five feet six inches, thence along the said Corporation line in a Northeastern direction one hundred and thirteen feet four inches to the beginning, and which said piece, parcel or lot of groung is a part of an half acre lot of ground denoted in the plan of said City of Richmond, by the number seven hundred and thirty six, in figures (736) in the plan of said City, as will appear by reference thereto, and is on the Western side of said lot seven hundred and thirty one, which was sold and conveyed to her said Agness Anderson, by Samuel Earling and Judith his wife, by their indenture bearing date the twenty ninth day of May eighteen hundred, and duly recorded in the office of the Hustings Court of the City of Richmond To Have and to hold the above described piece, parcel or lot of ground, with the Houses and other improvements thereon, and the priviledges and rights and appurtenance thereto belonging, unto him the said James M. Taylor his heirs and assigns, to his and their use and behoof forever And the said Samuel Anderson hereby for himself, and his heirs, covenants to and with the said James M. Taylor, that he has good right, title, in and to the said lot of ground and appurtenances, and that he will for himself and them, warrant and convey to him said James M Taylor and his heirs or assigns, a good, sure, and indefeasible estate of inheritance in fee simple, in and to said lot of ground and appurtenances, against the claims and demands of all persons whatsoever. Upon this trust and confidence nevertheless, and none other, that is to say, that the said James M Taylor, shall permit the said Samuel Anderson to remain in quiet and peaceable possession of the said lot of ground and its appurtenances, and to take the rents and profits thereof to his own use, until default shall be made in the payment of the said sum of three hundred dollars, at the time when the same become due and payable as aforesaid, and then upon this further trust, that the said James M Taylor shall, when thereto required by the said Anthony Bargamin, after the happening of such default as aforesaid 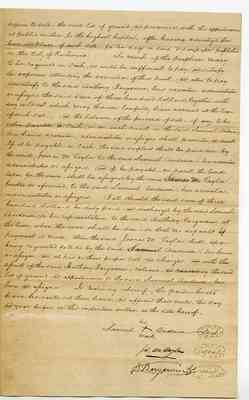 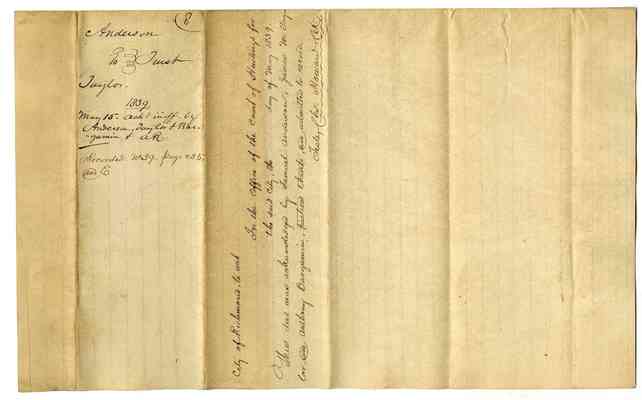 City of Richmond, to wit In the Office of the Court of Hustings for the said City, the day of May 1839 This deed was acknowledged by Samuel Anderson, James M Taylor, and Anthony Bargamin, parties thereto, and admitted to record. Teste, Chs: Howard, Clk. [clerk]