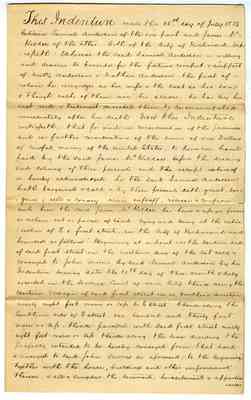 This Indenture made this 16th day of July 1839 between Samuel Anderson of the one part and James McKildoe of the other, both of the City of Richmond. Witnesseth: Whereas the said Samuel Anderson is willing and desirous to provide for the future comfort & support of Nutty Anderson & Nathan Anderson, the first of whom he recognizes as his wife & the last as his son & though each of them are his slaves, he has by his last will & testament directed them to be emancipated immediately after his death. Now this Indenture witnesseth, that for and in consideration of the premises and in further consideration of the sum of one Dollar of lawful money of the United States, to him in hand paid by the said James McKildoe before the sealing and delivery of these presents and the receipt whereof is hereby acknowledged he the said Samuel Anderson hath bargained & sold & by these presents doth grant, bargain, sell & convey, alien enfeoff, release & confirm unto him the said James McKildoe his heirs & assigns forever a certain lot or parcel or land, lying and being at the intersection of E & first street, in the City of Richmond and bounded as follows Beginning at a point on the western side of said first street on the northern line of the lot sold & conveyed to John Morris by said Samuel Anderson by his Indenture bearing date the 10th day of this month & duly recorded in the Hustings Court of said City thence along the Western Margin of said first street in a Northern direction ninety eight feet more or less to E street thence along the Southern side of E street, one hundred and thirty feet more or less, thence parallel with sid first street ninety eight feet more or less thence along the line dividing the property intended to be hereby conveyed from that sold & conveyed to said John Morris as aforesaid, to the beginning, together with the house, buildings and other improvements thereon, & all & singular the tenements, hereditaments & appurtenances 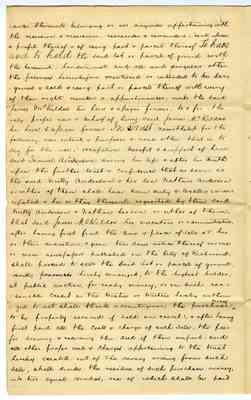 appurtenances thereunto belonging or in anywise appertaining with the reversion & reversions, remainder & remainders, rents issues & profits thereof & of every part & parcel thereof To have and to hold the said lot or parcel or ground with the tenements, hereditaments and all singular other the premises hereinbefore mentioned or intended to be bargained & sold & every part or parcel thereof with every of their right members & appurtenances, unto the said James McKildoe his heirs & assigns forever, to & for the only proper use & behoof of him said James McKildoe his heirs & assigns forever In Trust nevertheless for the following uses intents & purposes & none other that is to say for the use, occupation benefit & support of him said Samuel Anderson during his life & after his death upon the further trust & confidence that as soon as the said Nutty Anderson & her son Nathan Anderson or either of them shall have been duly & legally emancipated & he or they thereunto requested by them said Nutty Anderson & Nathan her son or either of them, that said James McKildoe his executors or administrators, after having first fixed the time & place of sale at his or their discretion, & given ten days notice thereof in one or more newspapers published in the City of Richmond, shall proceed to sell the said Lot or parcel of ground, and premises hereby conveyed, to the highest bidder, at public auction, for ready money, or on such reasonable credit as the trustee or trustees hereby authorized to act shall think advantageous, (the purchase money to be properly secured if sold on credit), & after having first paid all the costs & charges of such sale, the fees for drawing & recording this deed if then unpaid, and all other proper costs & charges appertaining to the trust hereby created, out of the money arising from such sale, shall divide the residue of such purchase money, into two equal moities, one of which shall be paid 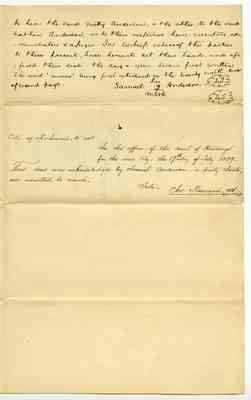 to her the said Nutty Anderson, & the other to the said Nathan Anderson, or to their respective heirs, executors, administrators & assigns In witness whereof the parties to these presents, have hereunto set their hands, and affixed their seals the day & year herein first written the word 'money' being first interlined in the twenty eighth line of the second page Samuel his mark Anderson {LS} {LS} City of Richmond, to wit In the office of the Court of Hustings for the said City, the 17th day of July 1839. This deed was acknowledged by Samuel Anderson, a party thereto, and admitted to record Teste, Chs: Howard, clk. [clerk] 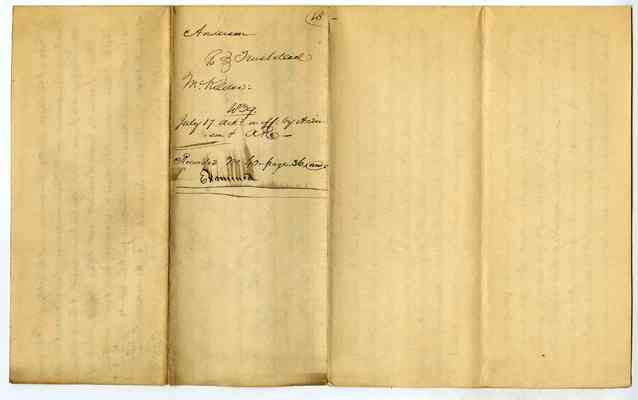 Last edit 3 months ago by Beka, LVA
Displaying all 4 Page