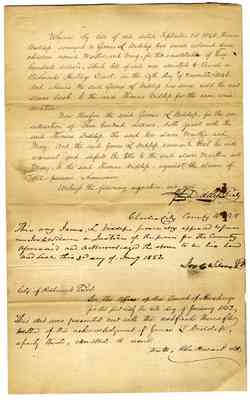 Whereas by bill of sale dated September 1st 1848, Thomas Diddep conveyed to James L. Diddep two small coloured slave children named Martha and Mary, for the consideration of Three hundred dollars, which bill of sale was admitted to Record in Richmond Hustings Court, on the 9th day of November 1848: and whereas the said James L. Diddep has since sold the said slaves back to the said Thomas Diddep, for the same consideration: Now therefore the said James L. Diddep, for the consideration of Three hundred dollars, doth grant unto the said Thomas Diddep the said two slaves Martha and Mary. And the said James L. Diddep covenants that he will warrant and defend the title to the said slaves Martha and Mary, to the said Thomas Diddep, against the claims of all persons whomsoever. Witness the following signature and seal. J L Diddep Seal Charles City County to wit This day James L. Diddep personally appeared before me Jos [Joseph] C Wilson a Justice of the peace for the County aforesaid and acknowledged the above to be his hand and Seal this 3rd day of Jany [January] 1852 Jos [Joseph] C Wilson JP [Justice of the Peace] City of Richmond To wit: In the office of the Court of Hustings for the said city the 6th day of January 1852, This deed was presented and with the certificate thereafter written of the acknowledgement of James L. Diddep, a party thereto, admitted to record. teste, Chs [Charles] Howard clk [clerk] 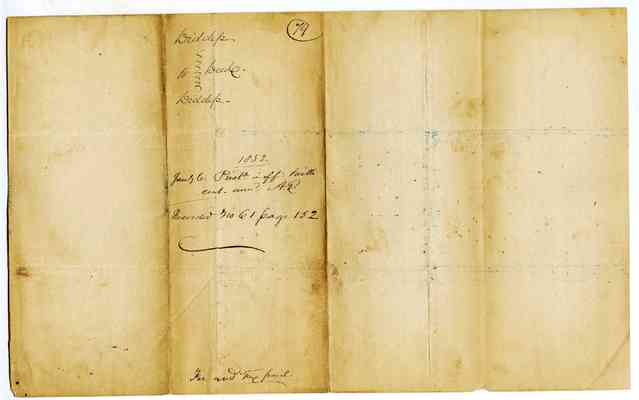 Last edit about 2 months ago by Beka, LVA
Displaying all 2 pages