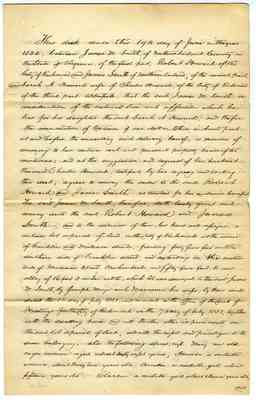 This deed made this 19th day of June in the year 1852, between James M. Smith, of Northumberland County in the State of Virginia, of the first part, Robert Howard of the City of Richmond and James Smith of Northumberland, of the second part, and Sarah A Howard wife of Charles Howard, of the City of Richmond of the third part: Witnesseth, that the said James M. Smith, in consideration of the natural love and affection which he has for his daughter the said Sarah A Howard, and the further consideration of the sum of one dollar to him in hand paid at and before the ensealing and delivery hereof, is desirous of conveying to her certain real and personal property hereinafter mentioned; and at the suggestion and request of her husband the said Charles Howard, testified by his signing and sealing this deed, agrees to convey the same to the said Robert Howard and James Smith as trustees for her exclusive benefit. The said James M. Smith, therefore, doth hereby grant and convey unto the said Robert Howard and James Smith and to the survivor of them, his heirs and assigns, a certain lot or parcel of land in the city of Richmond at the corner of Franklin and Madison streets, fronting forty five feet on the southern side of Franklin street, and extending on the eastern side of Madison Street one hundred and fifty five feet to an alley of 16 feet 8 inches width; which lot was conveyed to the said James M. Smith, by Joseph Mayo and Marianna [Mariana] his wife, by their deed dated the 1st day of July 1851, and recorded in the Office of the Court of Hustings for the City of Richmond on the 7th day of July 1851, together with the dwelling house and all the other other improvements on the said lot or parcel of land, and all the rights and privileges to the same belonging, also the following slaves, miss. Mary an old negro woman aged about sixty eight years, Amanda, a mulatto woman, about thirty two years old, Cornelia a mulatto girl about fifteen years old, Clara a mulatto girl about Eleven years old, and 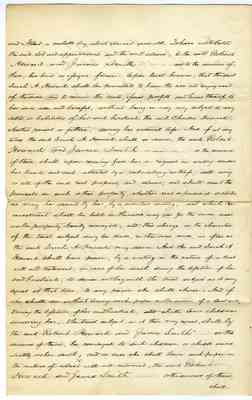 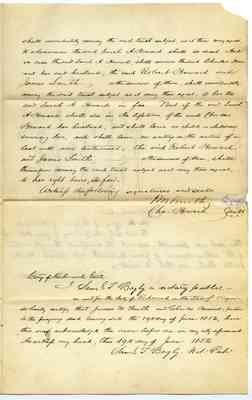 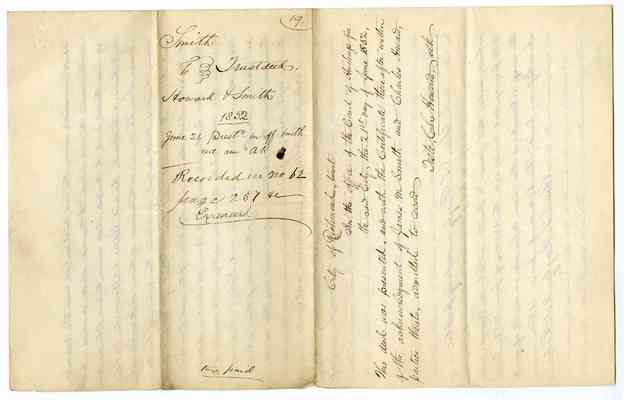 19. Smith To Howard & Smith} Trust deed. 1852. June 21. Prestd. [Presented] in off: [office] & with cert [certificate] annd [annexed] A.R. [admitted to record] Recorded in No 62 page 257 &c Examined tax paid City of Richmond, to wit: In the office of the Court of Hustings for the said City, the 21st day of June 1852, This deed was presented, and with the Certificate thereafter written of the acknowledgedment of James M. Smith and Charles Howard, parties thereto, admitted to record Teste, Chs [Charles] Howard, clk. [clerk]

Last edit 4 months ago by Beka, LVA
Displaying all 4 pages