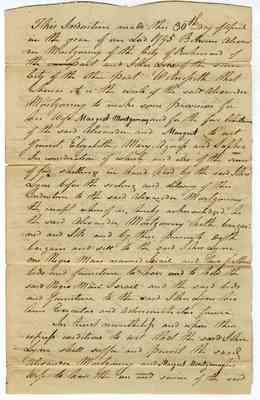 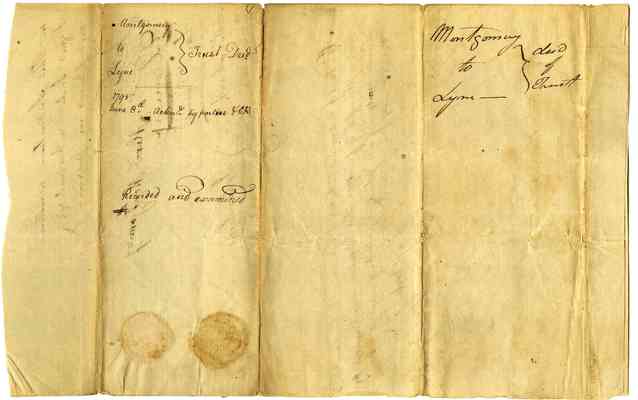 Montgomery to Lyne} deed of Trust

Last edit 30 days ago by Nathani 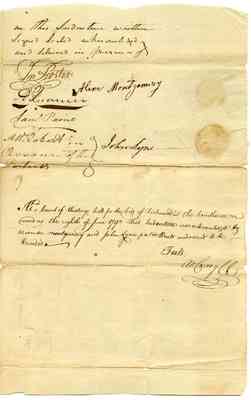 in this Indenture written Signed Sealed acknowledged and delivered in presence of } Jno Foster Alexr Montgomery A [Luauers?] Saml. Paine A. W. Robert in Presance of the Parties } John Lyne

At a Court of Hustings held for the City of Richmond at the Courthouse on monday the eighth of June 1795 this Indenture was acknowledged by Alexander Montgomery and John Lyne parties thereto and ordered to be Recorded Teste Ad. Craig C.C.

Last edit 29 days ago by Nathani 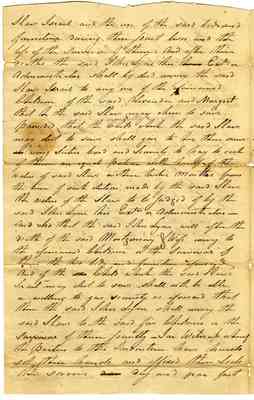 Last edit 30 days ago by Nathani 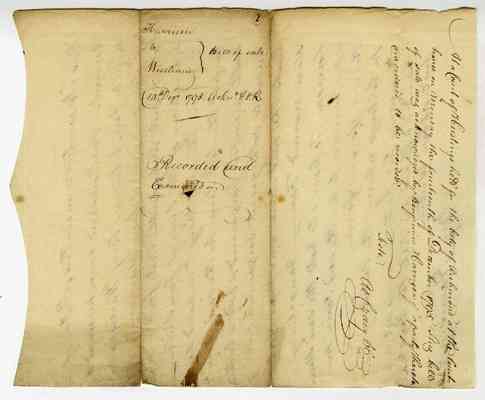 At a Court of Hustings held for the City of Richmond at the Courthouse on Monday the fourteenth of December 1795. This bill of sale was acknowledged by Benjamin Harrison Jr. a party thereto and ordered to be recorded. Teste W. Craig C.C.

Last edit 28 days ago by Nathani 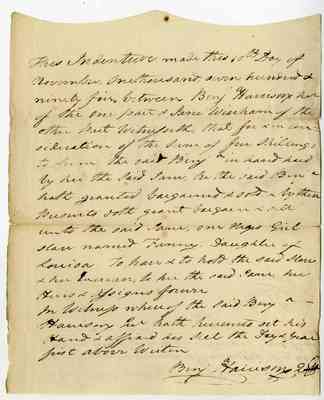 This Indenture made this 10th day of November, one thousand seven hundred & ninety [four?], between Benj [Benjamin] Harrison Jnr. of the one part & Jane Wiseham of the other part Witnesseth, that & in consideration of the sum of five shillings to him the said Benj'a in hand paid by the the said Jane, he the said Benj'a hath granted bargained & sold & by these presents the said Jane, one Negro Girl slave named Fanny Daughter of Louisa. To have & to hold the said slave & her Increase to her the said Jane her Heirs & assigns forever. In Witness whereof the said Benj'a Harrison Jnr. hath hereunto set his Hand & affixed his seal the Day & year first above Written. Benj. Harrison Jnr.

Last edit 28 days ago by Nathani 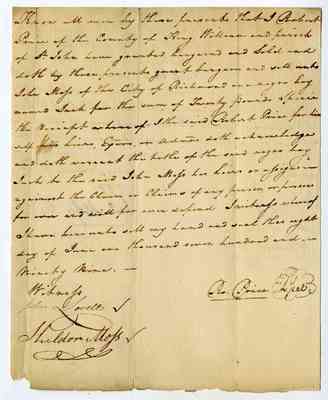 Know all men by these presents that I Robert Price of the County of King William and parish of St. John have granted bargained and Sold and doth by these presents grant bargain and sell unto John Moss of the City of Richmond one negro boy named Jack for the sum of Twenty pounds specie the receipt whereof I the said Robert Price for him self his heirs, Exors, and Admors doth acknowledge and doth warrant the title of the said negro boy Jack to the said John Moss his heirs or assigns against the claim or claims of any person or persons for ever and will for ever defend I witness whereof I have hereunto sett my hand and seal this eight day of June one thousand seven hundred and ninety nine. Witness John Lovell Sheldon Moss 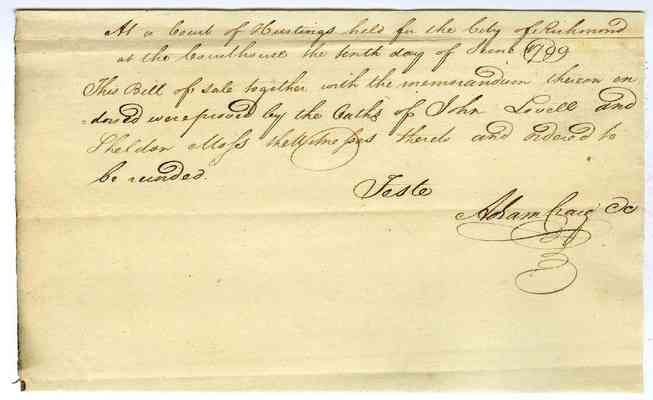 At a Court of Hustings held for the CIty of Richmond at the Courthouse the tenth day of June 1799. This Bill of Sale together with the memorandum thereon endorsed were proved by the Oaths of John Lovell and Sheldon Moss the witnesses thereto and ordered to be recorded. Teste Adam Craig CC

Last edit 6 days ago by MaryV 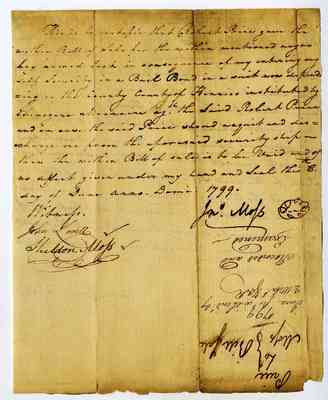 This is to certifie that Robert Price gave the written Bill of Sale for the within mentioned negro boy named Jack in consequence of my entering my self Security in a Bail Bond in a suit now depending in the County Court of Henrico instituted by Ebenezer [Maemairs?] ag'st the said Robert Price and in case the said Price should acquit and discharge me from the aforesaid security ship then the within Bill of Sale is to be paid and of no affect given under my hand and seal this 8th. day of June anno. Domini 1799. Jn. Moss {Seal} Witness. John Lovell Sheldon Moss

Last edit 24 days ago by Nathani 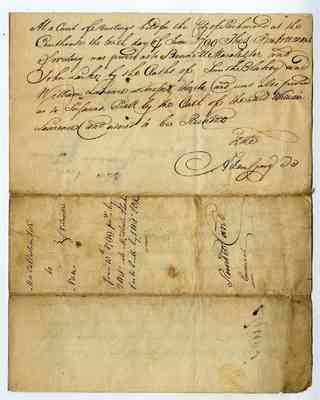 At a Court of Hustings held for the City of Richmond at the Courthouse the tenth day of June 1799 This Instrument of writing was proved as to Bennet Macalester and John Larke by the Oaths of Smith Blakey and William Laurence witnesses thereto, and was also proved as to Susanna Pratt by the Oath of the said William Lawrence and ordered to be Recorded Teste Adam Craig c c