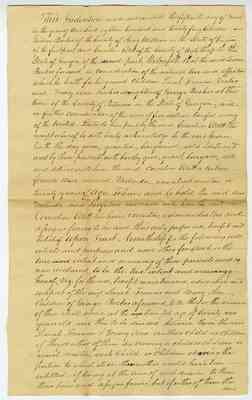 This Indenture made and executed this fifteenth day of March in the year of Our Lord eighteen hundred and tewenty four between Gideon Bosher of the County of King William in the State of Virginia of the first part, and Cornelius Ellett of the County of [Oglethrop] in the State of Georgia of the second part; Witnesseth that the said Gideon Bosher for and in consideration of the natural love and affection which he hath for his grand children Sarah Frances Bosher and Mary Ann Bosher daughters of George Bosher at this time of the County of Putnam in the State of Georgia, and in further consideration of the sum of five dollars lawful money of the United States to him paid by the said Cornelius Ellett the receipt whereof he doth hereby acknowledge he the said Gideon hath this day given, granted, bargained, sold delivered and by these presents doth hereby give, grant, bargain, sell and deliver unto him the said Cornelius Ellett a certain female slave named Melinda now about nineteen or twenty years of age. To have and to hold the said slave Melinda and her future increase unto him the said Cornelius Ellett his heirs, executors, administrators and assigns forever to his and their only proper use, benefit and [behohoof] upon Trust Nevertheless for the following uses intents and purposes and none other for such is the true [and (struck through)] intent and meaning of these presents and is now declared to be the true intent and meaning hereof [illegible]; for the use, benefit, maintenance, education and support of the said Sarah Frances and Mary Ann Children of George Bosher aforesaid, till they or the survivor of them shall arrive at the [age (struck through)] lawful age of twenty one years old; and then to be devided between them the said Sarah Frances & Mary Ann or their child or children if they or either of them die leaving a child or children in equal moieties, such child or children sharing the portion to which its or their mother would have been entitled if living at the time of such division to them their heirs and assigns forever, but if either of them the said

Last edit about 2 months ago by dwarfield 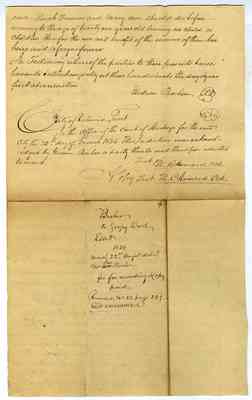 said Sarah Frances and Mary Ann should die before arriving to the age of twenty one years old leaving no child or children then for the use and benefit of the survivor of them her heirs and assigns forever. In Tetimony whereof the parties to these presents have hereunto intercahngeably set their hands seals the day of year first above written. Gideon Bosher (seal) (seal) City of Richmond [illegible] In the Office of the Court of Hastings for the said City the 20th day of March 1824. This Indenture was acknowl-edged by Gideon Bosher a party thereto and thereupon admitted to record. [illegible] [illegible] 4 Bosher to & copy Deed Ellett 1824 March 22nd [Origin. deliv.] Mr. [illegible] Bosher fee for recording copy paid Recorded No 22 page 229 and examined