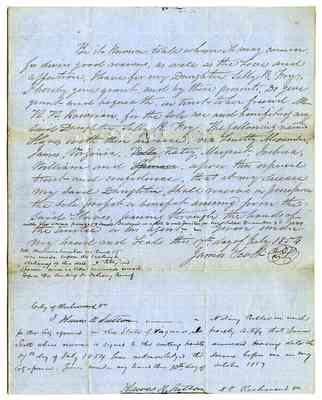 Be it known to all whom it may concern for divers good reasons, as well as the Love and affection I have for my Daughter Sally B. [Fry?] I hereby give grant and by these presents. Do give grant and bequeath in trust to her friend Mr R.R. Howison for the sole use and benefit of my said Daughter, Sally B. [Fry?]. The following named slaves with their increase viz Lanetty, Alexander, James, Virginia, Polly [struck: text], Katey, Margaret, Joshua William and Spencer [struck: text] upon this [especial?] trust and confidence that at my decease my said Daughter shall receive in possession the sale profit or benefit arising from the said slaves passing through the hands of [inserted above: text] with the same powers & trusts declared in a deed to said trustee for her dated December 2 1849 the trustee or his agent. Given under my hand and seal this 17th day of July 1854

City of Richmond VA I Hawes R Sutton _ a Notary Public in and for the City aforesaid in the State of Virginia. I hereby certify that James Scott whose name is signed to the writing hereto annexed bearing date the 17th day of July 1854 [illegible] acknowledged the [illegible] before me in my [illegible] = [illegible] under my hand this 10th day of October 1854 Hawes R. Sutton N.P. [Notary Public] Richmond 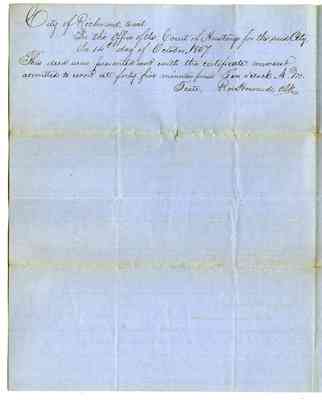 Duty of Richmond, to wit: In the office of the Court of Hustings for the said City, the 14th day of October 1854. This deed was presented and with the certificate annexed. admitted to record at forty five minutes past Ten o'clock AM. Teste, Ro Howard, clk

Last edit about 2 months ago by tarshalj 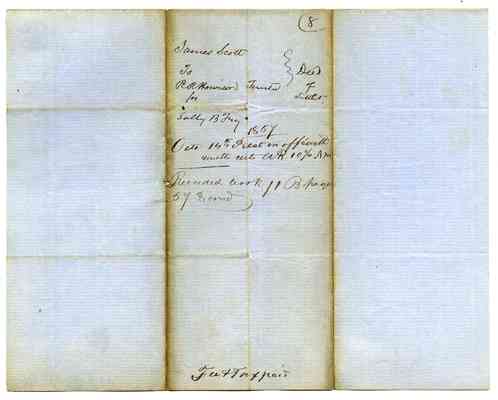