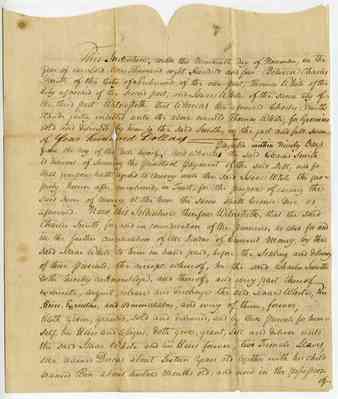 This Indenture, made this Nineteenth day of November, in the year of our Lord one Thousand eight Hundred and four: Between Charles Smith of the City of Richmond of the one part, Thomas White of the City aforesaid of the second part, and Isaac White of the same City of the third part: Witnesseth that Whereas the aforesaid Charles Smith stands justly indebted unto the above named Thomas White, for Groceries sold and delivered by him to the said Smith, in the just and full sum of four hundred Dollars payable within ninety Days from the day of the date hereof: and Whereas the said Charles Smith is desirous of securing the punctual payment of the said Debt, and for that purpose hath agreed to convey unto the said Isaac White the property herein after mentioned, in Trust, for the purpose of raising the said sum of money, at the time the same shall become due as aforesaid. Now this Indenture therefore Witnesseth, that the said Charles Smith, for and in consideration of the premises, as also for and in the further consideration of one Dollar of Current Money, by the said Isaac White to him in hand paid before the Sealing and delivery of these presents, the receipt whereof, he the said Charles Smith doth hereby acknowledge, and thereof, and any part thereof exonerate, acquit, release and discharge the said Isaac White, his Heirs, Executors, and administrators, and every of them, forever, Hath given, granted, sold and delivered, and by these presents for himself, his Heirs and assigns, doth give, grant, sell and deliver unto the said Isaac White and his Heirs forever, two Female Slaves, one named Dorcas about sixteen years old together with her child named Ben about twelve months old, and now in the possession of 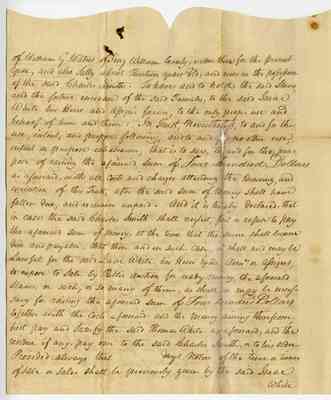 of William G. Waters of King William County, under Hire for the present year, and also Sally about Thirteen years old, and now in the possession of the said Charles Smith. To have and to hold the said Slaves, and the future increase of the said Females, to the said Isaac White his Heirs and assigns forever, to the only proper use and behoof of him and them: In Trust, Nevertheless, to and for the use, intent, and purpose following, and to and for no other use, intent or purpose whatsoever, that is to say, to and for the purpose

This page is incompleteEdit this page
Last edit about 2 months ago by Beka, LVA 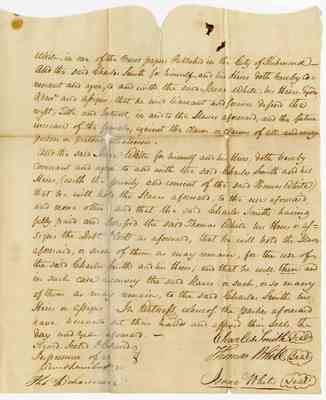 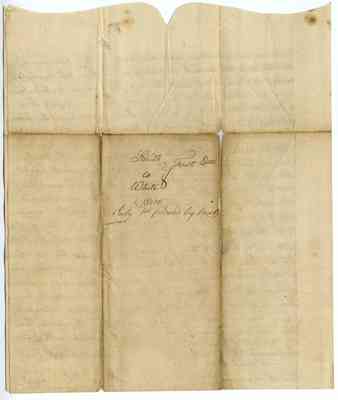